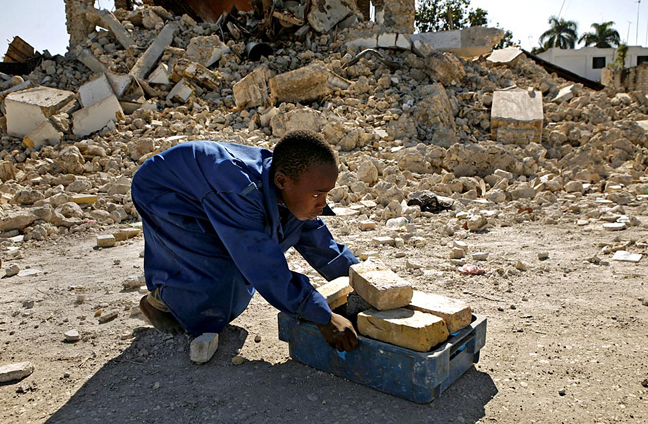 Haiti, your awesome revolt in 1791 against the revolting barbarity of French enslavement of the Africans was preceded by many revolts of the enslaved African-Haitians beginning as early as 1522. You never accepted that Africans at home and in the Diaspora can be enslaved, can be deprived of their property, liberty and humanity with impunity. African Haitians rejected that crime against humanity and unleashed the “irritated genie of African vindication and liberation.” But you fought alone, dying but fighting back.

I was not there in 1493 when Spain began its extermination campaign against the native Arawaks and enslaved Africans from Guinea, Angola and the Congo in 1508. I was absent when the planters used torture, terror and death to increase your productivity which “supplied two thirds of the overseas trade of France and was the greatest individual market for the European slave trade.” San Domingo “was the greatest colony in the world, the pride of France, and the envy of every other imperialist nation. The whole structure rested on the labor of half a million enslaved Africans. I should have been there when the irritated genie of African vengeance and liberation delivered its swift and awesome response.

I sent no condolences when Makandal, the Guinean, was executed in Limbe, when Boukman was murdered, when Toussaint was betrayed by the “phantom of liberty” and mercilessly starved to death in a French prison on the personal orders of Napoleon Bonaparte. I should have been there when Dessalines chose to take up the “irritated genie” of vengeance and liberation, rejected the deceitful “phantom of liberty” and was later assassinated.

I should have joined you, Haiti, in your courageous 269 years of rebellions and revolts against the Spanish and French criminals from 1522 to 1791, the year Boukman led the Blacks in a massive rebellion that ended in victory under the leadership of Dessalines and the irritated genie of vindication and liberation. I didn’t come to celebrate your victory over Napoleon and the surrender to you of his finest soldiers in November 1803.

I was not there when Petion, the ruler of Haiti and the Haitian people, nursed back to health the sick and defeated [Simon] Bolivar, gave him money, arms and a printing press and demanded the freedom of the enslaved Africans as a condition of Haiti’s support for his war against Spain, which ended in the freedom of the five states and their enslaved Africans: Venezuela, Colombia, Ecuador, Peru and Bolivia.

I was silent when the United States of North America betrayed Haiti and the Haitian soldiers who fought side by side with the Continental army in the Battle of Savannah in the revolutionary war. I did not say no when the U.S. supported France in its war against Haiti and its immoral and criminal demand for reparations for the French enslavers.

I was not there when Haiti proclaimed its independence in January 1804; I was absent in 1807 when two separate states were created in Haiti along class and color lines; I was not there in 1825 when your parliament agreed, under the threat of a French invasion, to pay reparations or indemnities of $90 million to the French enslavers for the loss of their “property.”

I said nothing when the United States of North America refused to recognize your independence for 60 years. I allowed the U.S. to invade you in 1915 and occupy and rape your mothers, daughters and sisters for 19 years and humiliate and rob you of your dignity and summarily transfer the entire contents of your treasury to the New York City Bank on the orders of Roger Farnham, the vice president of National City Bank.

I stood by idly when the U.S. supported both “papa” and “baby” “docs’” Duvalier and numerous other monsters until President Jean-Bertrand Aristide abolished the corrupt, demoralized and divided Haitian army, created by the United States, which killed only Haitians. 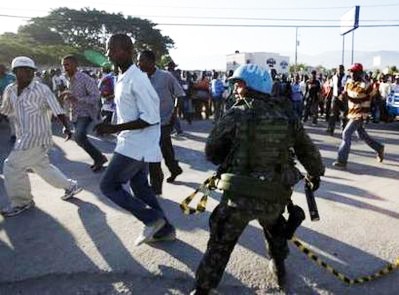 I was nearly complicit during the current U.S. government’s neo-conservative and media destabilization campaign and embargo against loans you are paying interest on but have not yet received for health care, potable water and roads; I should have said no! no! no! in the year 2000 when the U.S. “blocked every penny of international capital to the government of Haiti”; I was not there when the corporate and some independent media and so-called progressives lied and hid the truth about Haiti and President Jean-Bertrand Aristide’s popularly democratic elected government.

I am finally demonstrating in the streets, lobbying in Washington, D.C., and educating about Haiti throughout the Atlantic region because, dear Haiti, the barbarous, totalitarian monsters of torture, terror, repression and death came for me also. I knew that I could no longer sit silently by or limit my struggles to my problems alone.

I am mobilizing the North American people about your literacy campaign and “Universal Schooling Program,” your defense of children’s rights, your awakening of the poor to their humanity and equality; your liberation theology, your programs to reduce poverty, your program to pose an alternative to globalization and corporate domination and threats to our liberty in the U.S. I am actively with you in your demand for debt relief and restitution from the French government and private corporations for reparations you were forced to pay the French.

The Haitian government, with my active support, is now demanding from France $21.7 billion in restitution. I arrived late, but we came to fight for the poor against unjust wars for peace, justice, equality and the protection of your sovereignty and our constitutional rights from the hegemonic designs of the so-called coalition of coerced “super powers” built on the backs of labor, including the labor of the enslaved Africans. We will see the end of “the uses of Haiti,” the degradation of human rights and the environment.

I feel that I am among a growing number of North American grassroots activists whose goal is to educate everyone about the U.S. wars and actively struggle against them and for national sovereignty and preservation of the U.S. Constitution. Thank you for the work you’ve done, the sacrifice of your sweat and then your blood for freedom and dignity which the U.S. ambassador, on Nov. 18, 2003, sought to deny you by not appearing with the U.S. delegation to honor the 200th anniversary of your revolution. We, Haiti and its allies, will own the next 200 years and the future of humanity and the environment.

This statement of solidarity with the Haitian people was written in December 2003, not long before the coup of Feb. 29, 2004. It was to be presented to the Haitian government and grassroots organizations on the celebration of the 200th anniversary of the glorious Haiti revolution of 1804. Professor Thompson is a freelance reporter and an activist in the African Diaspora liberation movement in the Atlantic region. He is founder and chairman of African North America XXI, a branch of Afro-America XXI , a community development process headquartered in Honduras. It is hoped that other individuals and groups will endorse these sentiments, which are especially timely since the Jan. 12 earthquake. For further information, email Professor Thompson at lizzie1907@gmail.com.

Afterword: After reading this story in the Bay View print edition, Coyote Sheff, a prisoner in the notorious Ely State Prison in Nevada, wrote to thank the writer, Professor Emeritus Willie Thompson: “I couldn’t help but fall in love with his words. He really breaks down the history of Haiti and turns it into a poem at the same time! That’s amazing to me! I could really use this article to teach people in here about the history and struggle of Haiti.” 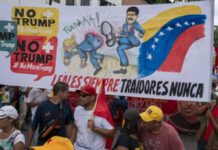 Venezuela: An axis of hope, dignity and defiance stands up to the triumvirate of evil