New Orleans (IPS) – Many survivors of Hurricane Katrina, which struck New Orleans and the U.S. Gulf Coast in August 2005, have been seeing their own reflection in media images of Haiti earthquake victims. And despite – or even because of – their own struggle, many feel personally driven to help organize assistance for the people of Haiti. 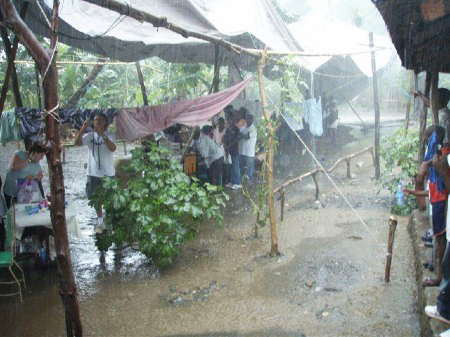 “I think everyone in New Orleans can imagine what it’s like, but we recognize that what’s going on there is 100 times worse,” said Orissa Arend, a New Orleans writer and activist.

“There’s a lot of activism, certainly a lot of compassion,” Carol Bebelle, co-founder of the Ashe Cultural Resource Centre, told IPS. “Folks get what it’s like.”

Bebelle says she simply couldn’t watch the television footage of the Jan. 12 earthquake’s aftermath after the first two or three days. “I couldn’t walk with them through that from the perspective of watching it … You’ve got to avoid the paralysis of the analysis stuff. I need to figure out what is the contribution I can make for Haiti to recover.”

Strong historical and cultural ties between Louisiana and Haiti are one factor behind the New Orleans-based relief efforts.

“The Caribbean is one of the places Africans were seasoned for slavery in America. We have a Haitian community here [in New Orleans]. It is because of that historical connection I think the people are very similar,” Bebelle said.

“Our foods are similar, we have kind of similar connections to spirituality and culture. The Creole that is spoken here is spoken there. I think the resilience of the people, the things people love about New Orleans is what people love about Haiti: the way people are warm and sharing and giving,” Bebelle said.

“The Caribbean is one of the places Africans were seasoned for slavery in America.” – Carol Bebelle

She also believes the people of both places are more authentic about themselves and less concerned with how they appear to outsiders.

“The New Orleans culture is a culture of familiarity, rhythm and connectedness,” Bebelle said.

Arend also noted there is a strong influence of voudon (voodoo) on the Mardi Gras celebration. “And remember, it’s because of the Haitian Revolution that France sold us [Louisiana] for a song [to the U.S.],” she added.

The similarities “even come down to the architecture of buildings destroyed in Haiti, reflective of French architecture, built for a moist but hot climate,” noted James Perry, director of the Greater New Orleans Fair Housing Action Centre and a former mayoral candidate.

“It’s because of the Haitian Revolution that France sold us [Louisiana] for a song [to the U.S.].” – Orissa Arend

While the toll in Haiti was exponentially higher, some local residents here see similarities between the Caribbean island and their own city.

“Haiti was in terrible shape before the disaster, but so was New Orleans,” Bebelle said. “We had a 27 percent poverty rate, and 40 percent not finishing high school. We have a chance to build something that’s better than what we had before. I think the same is true in Haiti. There were far too many people living in abject poverty.”

“From the perspective of a community of working class and poor people, we know in a real and present way the whole notion that when something comes up, you just take care of it. You never had the savings accounts. We always had, oh my God, somebody’s sick, somebody’s having a baby, somebody’s house is burned down, somebody had a [car] wreck. It didn’t matter if people were behind. They came together to help,” Bebelle said.

Perry said, “A number of the same mistakes have been happening. Some of the aid meant for Haitians who’ve experienced the earthquake hasn’t actually made it to them, to the most in need.”

“It’s not just like the storm comes and goes. It’s a lasting, lingering effect,” he said. “We hear the term ‘Katrina fatigue,’” referring to the general U.S. population’s weariness of hearing about Katrina, Perry said.

“Part of the fear that lies ahead for our brothers and sisters in Haiti is they may be in for the same kind of struggle. Once this story fades from the TV cameras, the concern is that they’ll be on their own,” he said.

Arend says two little girls who live next door have been going door to door selling cookies to raise money for earthquake victims.

“Haiti is long overdue. The people are so hopeful, I think they get it, that there’s something better waiting for them. What they’ve got to do is just hang on and hold on, and our job is to not forget them and keep actively thinking about them, making them part of our personal life, our thought, our budget, our prayer list. All of this energy kind of combines,” Bebelle said.

According to the Times-Picayune newspaper, there have been several medical missions from New Orleans to Haiti. One team is a privately financed consortium of 41 organizations in the city, now called the Louisiana-Haiti Sustainable Village Project, the newspaper reported.