President Obama delivered the eulogy Thursday for our beloved Dr. Dorothy Height. Dr. Height never did receive the mainstream recognition that she more than deserved, so I am proud that my president lifted her legacy today for all America and the world to see and honor. She met with every U.S. President from FDR (Franklin D. Roosevelt) to Obama, received the highest presidential honors, traveled the world advocating for women and, as of mid-March of this year at the age of 98, was actively engaged in social action.

There is no better way to illustrate her amazing life than by recalling what she said at my graduation at Mount Holyoke College in Massachusetts where she received an honorary degree the same year I graduated.

She told the story of being on a train in the South during the 1940s when the conductor, who was white, asked her for her ticket. Back then it was virtually unheard of for whites in the South to address Blacks with anything amounting to genuine respect.

When the conductor took Dr. Height’s ticket, he asked her condescendingly, “Tell me, auntie, do you make good biscuits?”

Dr. Height said she looked up at the conductor and, with steely gentility, replied, “Sir, I have been honored to be an adviser to President Roosevelt and to serve on committees with Mrs. Roosevelt. I serve on the national board of the YWCA. I have been part of many international gatherings, and,” she said after a slight pause, “I make VERY GOOD biscuits.”

U.S. flags on every military base, home and abroad, and every American flag on every federal building was lowered Thursday in tribute to honor the contributions that this amazing American, freedom fighter, coalition builder and advocate has made on behalf of Black women and all Americans.

Years later, I met her again at a celebration in Washington, D.C., in honor of her life and contributions in public service, the YWCA, and the women’s movement. At this celebration I was able to talk with her, take pictures and thank her for opening so many doors for me. The opportunity to be in her presence was one of the most memorable moments of my life.

I am so honored and humbled to lift Dr. Height in my work today and continue her powerful legacy on behalf of all womankind. And just so y’all know, I make delicious scratch biscuits too!

Crystal Hayes, a policy scholar activist in race and motherhood, women’s health, incarceration rates and race, and anti-racism education, is the daughter of Robert Seth Hayes, one of the longest held political prisoners in the U.S. and a veteran of the Black Panther Party and Black Liberation Army. She is the mother of 17-year-old Myaisha, to whom Seth is a doting grandfather, calling his family “the loves of my life.” Join Crystal’s Free Robert Seth Hayes page on Facebook.

Born in the capital of the old Confederacy, brought north by her parents as part of that great migration, Dr. Height was raised in another age, in a different America, beyond the experience of many. It’s hard to imagine, I think, life in the first decades of that last century when the elderly woman that we knew was only a girl. 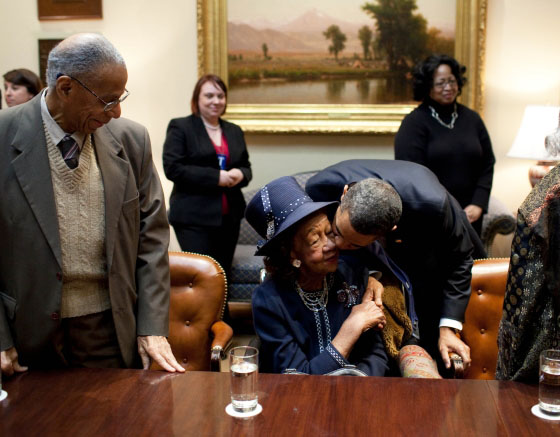 Jim Crow ruled the South. The Klan was on the rise – a powerful political force. Lynching was all too often the penalty for the offense of black skin. Slaves had been freed within living memory, but too often, their children, their grandchildren remained captive, because they were denied justice and denied equality, denied opportunity, denied a chance to pursue their dreams.

The progress that followed – progress that so many of you helped to achieve, progress that ultimately made it possible for Michelle and me to be here as President and First Lady – that progress came slowly. …

Dr. Dorothy Height deserves … a place in our history books.

Look at her body of work. Desegregating the YWCA. Laying the groundwork for integration on Wednesdays in Mississippi. Lending pigs to poor farmers as a sustainable source of income. Strategizing with civil rights leaders, holding her own, the only woman in the room, Queen Esther to this Moses Generation – even as she led the National Council of Negro Women with vision and energy, vision and class.

One of my favorite moments with Dr. Height – this was just a few months ago – we had decided to put up the Emancipation Proclamation in the Oval Office, and we invited some elders to share reflections of the movement. And she came and it was an inter-generational event, so we had young children there, as well as elders, and the elders were asked to share stories.

And she talked about attending a dinner in the 1940s at the home of Dr. Benjamin Mays, then president of Morehouse College. And seated at the table that evening was a 15-year-old student, “a gifted child,” as she described him, filled with a sense of purpose, who was trying to decide whether to enter medicine or law or the ministry.

And many years later, after that gifted child had become a gifted preacher – I’m sure he had been told to be on his best behavior – after he led a bus boycott in Montgomery and inspired a nation with his dreams, he delivered a sermon on what he called “the drum major instinct” – a sermon that said we all have the desire to be first, we all want to be at the front of the line.

The great test of a life, Dr. Martin Luther King Jr. said, is to harness that instinct; to redirect it towards advancing the greater good; toward changing a community and a country for the better; toward doing the Lord’s work.