Detroit Police Officer Joseph Weekley has been identified as the officer responsible for killing Aiyana Jones. He is currently a defendant in a federal civil lawsuit for a nearly identical no-knock home invasion where children present watched as the defendant officers shot two dogs. 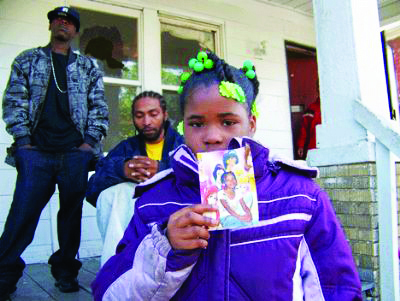 Detroit – “As soon as they hit the window, I hit the floor and reached for my grandbaby. I saw the light go out of her eyes and blood coming out of her mouth. I had never seen anything like that before: My beautiful gorgeous granddaughter. I can’t trust them; I can’t trust the Detroit police.”

Mertilla Jones, 46, weeping in the arms of her daughter, LaKrystal Sanders, described how Detroit police killed 7-year-old Aiyana Stanley Jones during a military-style assault on their home on May 16. Jones spoke at a press conference held by attorney Geoffrey Fieger May 18, as he announced the filing of two lawsuits in the case.

Jones said she and Aiyana were asleep on a couch in the lower flat’s front room at about 12:30 a.m. when police tossed an incendiary stun grenade through the window directly above the couch. Fieger said Aiyana was severely burned and then shot in the head and neck by an unidentified police officer standing on the porch. He said the scene is shown in a videotape he and other attorneys watched.

Jones said she and her son, Aiyana’s father, Charles Jones, were forced to lie on shattered glass on the floor as police grabbed Aiyana and rushed her to a police car. The family, including three other children, Carlos, 4, Pierre, 2, and 3-month-old Krystal, were held in the home for hours after the killing. No one was allowed to accompany Aiyana to the hospital.

“My brother [Charles] was crying and begging to go with his daughter, but they wouldn’t let him,” Sanders said. “The police kept telling me my niece was OK.”

Mertilla Jones said police handcuffed her before she could take her blood pressure medication, then dragged her off to Detroit Receiving, where she was tested for drugs and later at police offices for gunshot residue. She said she believed she was held for eight hours.

“All that time, I couldn’t be with my family,” she said sorrowfully.

Assistant Chief of Police Ralph Godbee claimed at a press conference May 16 that Mertilla Jones had confronted or “had contact” with the officer who shot Aiyana, causing his gun to go off accidentally. He would not release the names of any officers involved.

Police Chief Warren Evans has been “out of the country” but was being continually briefed, Godbee said.

Godbee said the officers, from the department’s Special Response Team, had a warrant to search both the upper and lower flats in the 4000 block of Lillibridge for a suspect in the May 13 killing of 17-year-old Je’Rean Blake at a nearby store.

Chauncey Owens, 34, who lives in the upper flat with a separate entrance, was arrested without resistance after Aiyana’s death, said Feiger. Owens is engaged to Sanders.

Fieger disputed Godbee’s account, saying officers had a warrant only for the upstairs address and had to go back to get a warrant for the downstairs flat after the child’s death. He said a police undercover vehicle was parked outside the home all day watching as children played outside, until Owens came out of the upper flat. Then the vehicle left, Fieger said, perhaps to get the first warrant for Owens’ arrest.

At the scene of the tragedy early May 16, family and neighbors gathered outside the flat, with children’s toys strewn in the front yard, expressing their sorrow, shock and anger.

Cousin warned cops that children were in home

Charles Jones cried in agony in the arms of family members, sitting next to the blood-soaked couch on which his daughter died. His family had moved it to the porch.

Jones, an independent contractor, said Aiyana was the second oldest of his seven children, and his only daughter.

“She was an honor roll student and very artistic,” Jones said. “She loved her family and friends and was very popular in school with her classmates. She loved Disney characters but lately she’s been getting into Hannah Montana and Justin Bieber. She loved to dance.”

“We were good friends,” she said. “We played and studied and did our work together.”

Jones said he was in a back room when the grenade and gunshot went off. He ran out to see what was going on, only to be forced to kneel on broken glass as police carried out Aiyana and her favorite Disney blanket, both burnt. He said that he believes if his mother had confronted a police officer as Godbee claimed, she would have been dead too.

Aiyana’s cousin Mark Robinson said the police detained him outside before the home invasion.

“They threw me on the ground and put their knees in my back,” Robinson said. “I screamed at least eight times that there were kids in the house, before they threw the grenade and knocked the door down, yelling ‘Police!’”

Altogether, 12 people were in the house, including the four young children.

Aiyana’s great aunt Joann Robinson said, “I heard the boom and came out there. I had to ask a whole bunch of times for the search warrant. They didn’t show it until way afterwards, about 4 or 5 a.m. as they were driving away.”

Family members reported there were no weapons in the house.

Sanders said that police knocked down the upper and lower flat doors, which are on either side of the building, at the same time.

“There ain’t no way this was an accident. They came here prepared to kill,” said a neighbor who asked to be identified as “Michelle.” “Where’s the mayor? Where’s Warren Evans? Why is no one showing remorse to this family? They are grieving.”

According to “Michelle,” the scene was not roped off with yellow police caution tape or otherwise secured. “Michelle” said a fire truck came by earlier and washed the street down to get rid of Aiyana’s blood, but spots of it could still be seen on the sidewalk.

“The mayor has publicly extended his condolences to the family, as well as responded to this tragedy,” said Karen Dumas, chief of Mayor Dave Bing’s communications office. “He plans to reach out to the family at an appropriate time. However, our ability to respond is now impeded by the pending lawsuits.”

At a press conference, Godbee said police were too wary to come back to the area, fearing neighborhood anger. Told that the family needed money for funeral expenses, he was non-committal about police assistance.

Daily media reporters relentlessly grilled Mertilla and Charles Jones and Mark Robinson about details of the event during the press conference, eventually producing an angry outburst from a relative listening in the gallery.

Fieger advised the three not to respond to many questions. When reporters asked him if he had the name of the police officer responsible for Aiyana’s death, Fieger shot back, “Why don’t you get it? Isn’t that your job?”

Reporters spent most of the conference asking Fieger how he obtained the videotape. He said a man came to his office May 17 with his attorney and ran the videotape on the camera which took it. He said the man feared the police and would not give Fieger a copy. Fieger said the man was local, not from A&E’s The First 48 crew which allegedly accompanied police during the raid.

Fieger said he knows the man’s name but will not reveal it. He said it is possible the man is either a Detroit police officer or associated with the department.

“I just hope that this video doesn’t end up deep-sixed,” Fieger said. “If the Detroit police get it first, then they will do one of two things, either destroy it or move to exclude it from court testimony as prejudicial.”

But he said he will question the 15 police officers on the raid team in court, and they will either tell the truth or lie about what happened. He called on them to show the “milk of human kindness” and tell the truth and called on Evans and Mayor Bing to acknowledge what had happened.

‘We don’t want this city to explode’

“Please don’t let this child have died in vain,” he asked. “We don’t want this city to explode.”

Fieger said the family is having an independent autopsy performed by Oakland County Medical Examiner Mark Spitz, the son of the internationally-renowned Werner Spitz, before funeral arrangements are made.

Fieger has also had his own investigators at the scene.

The lawsuits charge Officers “John Doe and Robert Row” with killing Aiyana and then filing false reports to cover up what happened. They say neither Aiyana, her grandmother nor any other occupants of the house posed a threat to the officers.

The Detroit police have handed the investigation of the incident over to the Michigan State Police. Godbee claimed they want to assure an “independent” investigation.

Describing a 2006 special of its show, Detroit SWAT, the A&E network comments on its website, “In Detroit, Officer Joseph ‘Brain’ Weekley and the DETROIT SWAT team are called to the scene of a barricaded gunman who is possibly schizophrenic and off his medication.” 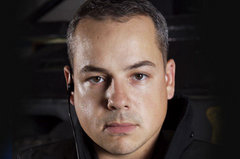 An A&E bio says, “Weekley, whose nickname is ‘Brain,’ is a 4-year veteran of Detroit’s special response team. Weekley began his career in law enforcement over 10 years ago as a patrolman on the streets of Detroit. After seven years, ‘Brain’ joined SRT and has since become one of the primary drivers of the Armored Personnel Carrier. When he’s not behind the wheel of the APC, Officer Weekley can be found at home with his wife and two children.”

In another SWAT video, dozens of the team’s “combat weapons” are shown. The team leader displays a “high-risk search warrant.” During a training exercise, the team fires at least two stun grenades into a home as they enter. Loud booms and a flash of fire are shown.

A&E’s new series is “The First 48.” A team from that show was filming the invasion of the Jones home when Aiyana was killed. A representative of A&E said only “no comment” when asked about the raid.

On May 25, Mayor Bing announced that reality show film crews will no longer be allowed on police raids.

Diane Bukowski, staff writer for The Michigan Citizen, “America’s Most Progressive Community Newspaper,” where this story first appeared, can be reached at diane_bukowski@hotmail.com. Bay View staff contributed to this report.

What solitary confinement does to the brain