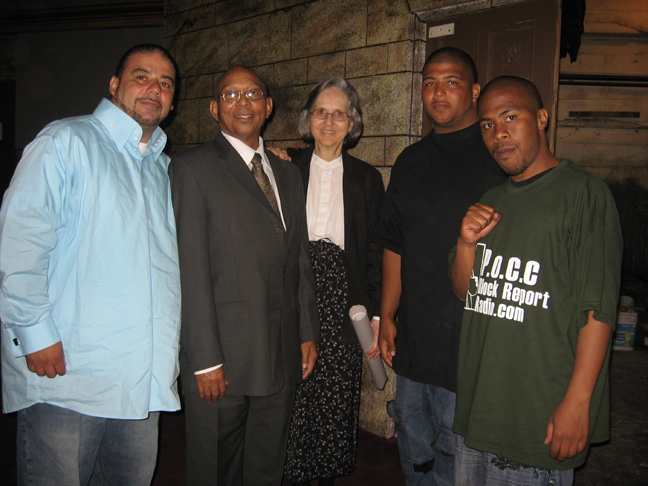 In the emotionally tumultuous murder trial of Johannes Mehserle, the BART cop who pulled the trigger that killed unarmed Oscar Grant, a 22-year-old Black man who was lying face down with his hands behind him on the Fruitvale BART platform early New Year’s morning of 2009, there have been a lot of ups and downs.

The trial was moved to Los Angeles after three days of rebellions in Oakland, which called for the city, mayor and police department to be accountable for the unjustified murder of an unarmed man.

Tuesday, June 22, was the day a number of the witnesses that the defense called testified. Among them were individuals that were on the same train as Grant and his friends who testified that an unidentified white guy had a Black guy in a head lock on the train, dismissing the insinuation by the defense that Oscar and his friends were the creators of the initial disturbance that got the police called.

The high point yesterday was the testimony of Jack Bryson Jr., one of Grant’s friends who were with him the fatal night that he was murdered by BART police. Bryson’s testimony was great, because his crafty answers allowed minute details into the case, which is vital, right before the eyes of a jury that does not contain any Black people.

One of the high emotional points of the case was when Jack Bryson described Oscar Grant’s final minutes. “Oscar was yelling, ‘I can’t breathe’ to Pirone, who is over 6 feet and was on the neck of Oscar Grant. Mehserle stood up and said, ‘Fuck this,’ and shot him.” Bryson then went on to describe a situation where both cops were demanding to see Grant’s arms from under his body, and a few seconds after he revealed his arms, he was murdered.

Jack Bryson said he yelled at Oscar after he was shot to stay awake and to the police to call the ambulance. The unidentified officer who was on Bryson declared, “We’ll call the ambulance when you shut the fuck up!”

Bryson went on to say that he was never searched on the Fruitvale platform or at the Lake Merritt BART police station, which seems ridiculous if you consider the earlier testimony of former BART police officers Dominici and Pirone, who were involved in the murder and who testified last week that they had felt threatened by Oscar Grant and his friends.

While describing the games that the police play with some of their victims whom they will face in court one day, Jack Bryson Jr. continued on about being detained and handcuffed for at least four hours, when a female cop told him that he wasn’t under arrest. If he had been under arrest, she said, he would have been read his Miranda rights.

Then he was read his Miranda rights, which included the part that “anything you say can and will be used against you in a court of law.” He was then told that he was at the police station just to give a statement, because if he had been under arrest he would have the right to an attorney, but since he wasn’t, it wouldn’t be necessary.

The high point yesterday was the testimony of Jack Bryson Jr., one of Grant’s friends who were with him the fatal night that he was murdered by BART police. Bryson’s testimony was great, because his crafty answers allowed minute details into the case, which is vital, right before the eyes of a jury that does not contain any Black people.

Bryson then went on to describe how former BART Officer Pirone kept tormenting him when he was in police custody. He talked about how Pirone would periodically pull up a seat next to the cell that he was in by himself, kick his feet up, look at Bryson with a smirk, then laugh.

While all of this testimony was going on, Johannes Mehserle, who was wearing a pink tie, looked straight ahead as if he was in a trance instead of off to his left where the witnesses were testifying. The jury looked captivated, and a few in the audience sobbed after hearing about Oscar Grant’s last few minutes alive and the memories of murder and psychological torture that will be engraved on the minds of Oscar Grant’s friends who were with him the night the police murdered him.

The day ended with the testimony of BART Officer Jon Woffinden. Woffinden was part of the defense’s plan to show how dangerous a place the BART stations of the Bay Area are. He is also a close friend of Johannes Mehserle. Woffinden admitted on the witness stand that he has breakfast with Mehserle about once a week and that he used to ski with former Bart officer Tony Pirone on a regular basis.

Woffinden talked about how he had heard on the dispatch on New Year’s morning about a fight on a San Francisco train. Then he described how he and his partner Mehserle were called to West Oakland to respond to a man who had jumped off the platform. When they found the guy, he was bleeding out of his nose and ears, and Officer Woffinden claimed they found a handgun in his right pocket.

He said that at the time in his mind, it was probable that both of these things were connected. That statement is laying some of the groundwork for the defense, that the BART platform was in chaos and therefore a confused Mehserle killed Oscar Grant, which seems to be miles from the truth after listening to the testimony and seeing the video of the murder played back a number of times in the courtroom.

Woffinden described the scene that he and Mehserle encountered on the BART platform to Mehserle’s lawyer. He said that there were a lot of people screaming “white devil, cocksucker, motherfucker and a barrage of expletives and racial slurs.” He then went on to contradict himself. When the prosecution asked him another question about the scene as he approached, he said, “I heard yelling and screaming but I couldn’t hear specifics.” I don’t know if the police-sympathetic jury caught that.

Officer Woffinden said people were screaming “white devil, cocksucker, motherfucker and a barrage of expletives and racial slurs.” Later he testified, “I heard yelling and screaming but I couldn’t hear specifics.”

Right after Johannes Mehserle unjustifiably shot unarmed Oscar Grant, Woffinden says he told Mehsele, “Walk away. We have this. We’ll take care of it.”

With that statement, when it is all said and done, Woffinden may have subconsciously described the state’s approach to this case, including that of the D.A., who many of the Grant supporters feel is trying to throw the case. The saga continues. And many expect the murder trial to go another two to three weeks.

Minister of Information JR interviews Mopreme Shakur about the connection between the Oscar Grant case, the Ramparts scandal and the assassinations of Tupac Shakur and the Notorious B.I.G. This interview was broadcast on KPFA’s Transitions on Traditions Monday, June 21.

Prosecution rests in trial of cop who killed Oscar Grant

Minister of Information JR is FREE!