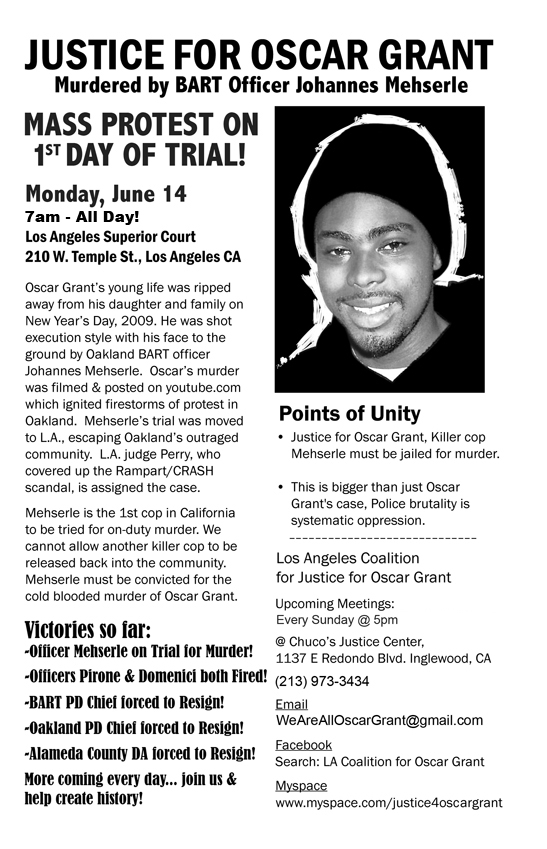 Morning testimony in day two of the Mehserle trial ended on an emotional note. A 17-year-old friend of Oscar Grant, accompanying Grant when he was shot by the former transit officer, was called to the stand.

Jamil Dewar had filmed some of the events the morning of Jan. 1, 2009, on the Fruitvale BART station platform with his cell phone camera.

Although the video does not actually show Grant being shot by Mehserle, Dewar broke down, sobbing uncontrollably, as the court heard the sound of Mehserle’s gun go off in the video. His mother rushed to the witness stand to console him, also weeping, as the court went into recess for lunch.

Dewar, who was 15 years old at the time of Grant’s death, was one of five individuals at the BART station who captured various portions of the chaos on film.

Prior to Dewar taking the stand Friday, the court heard from Karina Vargas, Tommy Cross and Daniel Liu. The prosecution was continuing its theme of establishing the video evidence in the case, begun Thursday afternoon, by calling the New Year’s Eve BART riders who had shot the videos of the Mehserle shooting. Maragarita Carazo, who was called to the stand Thursday, was the first to testify.

Four common threads bound all of the previous four witnesses’ testimony: All began filming due to the aggression they say they either saw or heard from officer Tony Pirone; all stated that Oscar Grant was cooperative the whole time and that his hands were behind his back; all stated that Mehserle was holding his gun with both hands in front of him, and all said that Mehserle had a shocked look on his face.

Michael Rains, attorney for the defense in the case, took the opportunity to briefly cross-examine all of the witnesses on their testimony, mainly focusing on their perceptions of Mehserle’s facial expression after Grant was shot.

Rains’ questioning of Dewar however took on a different tone. Using transcripts of Dewar’s testimony during a preliminary hearing in May of 2009, Rains first attempted to elicit evidence of gang activity and whether or not Grant was the aggressor in the scuffle that led to BART police being called to the Fruitvale station.

Dewar’s recollections were inconsistent even though Rains took the opportunity to read back portions of his testimony to him. At one point Rains asked if Dewar did in fact give false testimony during the preliminary hearing, wherein Dewar stated he hadn’t meant to. 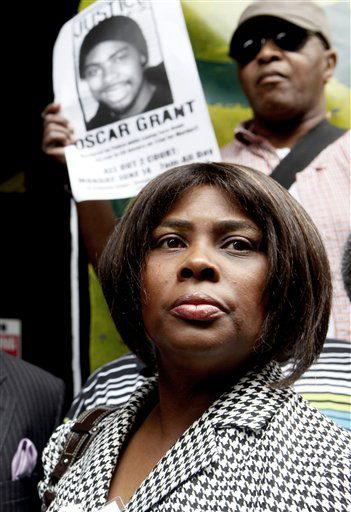 “[T]he defense was trying to bring up some irrelevant issues, possibly connected to gangs, that really had no impact on Mr. Mehserle shooting Oscar Grant in his back,” said Alex Alonso of streetgangs.com. The site is a compendium of news, analysis and information on gangs, the court system and law enforcement, including a section called “Good Cop/Bad Cop.”

An expert witness in numerous criminal trials who observed the day’s proceedings, Alonso said he felt that Rains’ questioning was out of line.

“And while the defense attorney was asking all these questions, I noticed that the prosecution did not object … and allowed this questioning to go on for several minutes until the judge actually requested a sidebar,” said Alonso. “I felt that the judge maybe saw that the line of questioning was irrelevant ….”

Rains ended his cross-examination of Dewar by asking why the young man didn’t break down emotionally in May of 2009 when he saw his video played back the way he did today.

Dewar answered that he hadn’t seen the video any more since that time.

The trial will resume Monday, June 14, at 8:30 a.m., while the local Oscar Grant Justice Coalition will have a day-long protest in front of the courthouse beginning at 8 a.m.