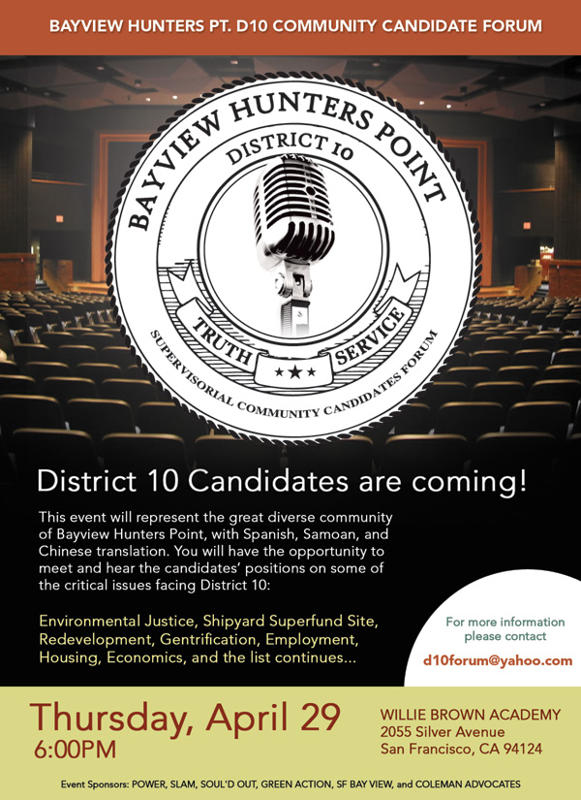 San Francisco – A historic community event took place on April 29, the Bayview Hunters Point District 10 Supervisorial Community Candidates Forum. Some 200 people attended – a diverse community of folks. The candidates who responded to the call of the community were Espanola Jackson, Bill Barnes, Isaac N. Bowers, Dr. James M. Calloway, Edward Donaldson, Kristine Enea, Marie Franklin, Rodney Hampton Jr., Anthony “Tony” Kelly, DeWitt M. Lacy, Geoffrea Morris, Steven Moss, Marlene Tran and Lynette Sweet, who left for another event after her introduction. All of the candidates on record as of April 8 with the Department of Elections had been invited.

This was just the first forum. The people came and responded with great interest clamoring for the next forum. More forums have to be planned because the issues are too weighty to vet out in a single two-hour session.

The beauty of this forum style event was the District 10 constituency had the opportunity to hear the candidates’ positions on several critical issues regarding the Hunters Point Shipyard Superfund site, the City’s relationship with the Lennar Corp. and early transfer of the shipyard to Lennar, gang injunctions and building relationships within this multicultural district.

The forums should help avoid ballot box confusion. How many times do we as voters wait until voting day to look at the list of names – this year so far over 20 people are in the running for District 10 supervisor – but we do not recognize or have an intimate knowledge of who these people are and how their decision-making capacity will affect our very futures.

The event started on time with the candidates entering the gym to a resounding drum brigade provided by the Willie Brown Academy youth band; they were fantastic. The candidates then introduced themselves to the audience.

Brief videos providing background information on each question were shown. At the end of the forum each candidate gave a closing statement. The audience was given question cards and evaluation forms to provide feedback for upcoming candidate forums on additional pressing issues facing District 10, such as employment opportunity, housing and education.

The candidates were asked, “What is your position on” these three main questions:

1) Bayview Hunters Point and the City’s relationship with Lennar. The video shown can be seen at www.2big2go2jail.com/windows.html.

• Pattern of broken promises – for example, Lennar promised BVHP a legacy fund of approximately $31 million; some five years later the legacy fund is just about non-existent.

• Lennar is the defendant in over 500 lawsuits around the country.

• Lennar built homes on undetonated bombs and the homeowners had to be evacuated.

2) Early transfer (prior to cleanup completion) of the Shipyard Superfund site? EPA consultant Wilma Subra’s presentation Feb. 18 at the Center for Self-Improvement illustrated this question; the the slides are available at www.realasponse.com/wilma.ppt and here’s the audio:

• The toxic exposure dangers to the current community, workers and the future community

3) Gang injunctions, the criminalization of our youth and building community relationships. The video shown can be seen below.

• Do you understand the connection between an increase in crime, redevelopment and developers?

• Would you want your name put on a list without your knowledge?

• Every youth in Bayview is not a criminal. “My grandson was mowing his own lawn in front of his own house when the police stopped to ask him if he lived there,” stated one long time Bayview resident and activist.

The room filled up, extra chairs had to be found, and the room was still full at the end of the event around 8:40 p.m. Some 40 evaluations from the audience showed that Espanola Jackson’s pointed answers to the questions were well received and expressed appreciation for candidates who stayed on point and were concise. People were clearly in tune and interested in what their potential supervisors had to say; this audience was listening. As their evaluations made apparent, they are not fooled by “fluffy” answers.

But as we all know, actions speak louder than words, so again, community, it is up to us to watch our candidates over these next few months. We ourselves have to step up our involvement in this especially critical time period of June and July with regard to the votes that may take place at City Hall. We have to listen for the candidates to publicly state their positions or take no position at all.

On Thursday, May 20, for instance, Espanola Jackson was educating the Planning Commission on issues pertaining to the Shipyard Superfund site as the commissioners ready themselves for a critical vote on the environmental impact report on June 3 – a date that could change. Where were the other candidates?

The community stated on evaluation cards they do not want to be sold out and left behind by their next supervisor. At future forums, District 10 residents will be able ask the candidates how their actions match their stated positions. Are they speaking truth to power at City Hall during public comment? Watch the meetings on SFGTV Channel 26 and see if they take a stand or if they are there at all.

Many people want to be told who to support, but this forum and the events to come are an effort to raise individual consciousness, knowledge and most of all involvement, so each registered voter can listen, learn and gain an intimate understanding of your candidate. What are the candidates doing in the community now? Is your candidate concerned about your future in this community? Have you seen your candidate speaking truth to power regarding the major battles that have been ensuing for years in this district? These forums are presented to empower you, to empower your voice for your future.

Over all, the community feedback indicated that people want to hear from the heart of the District 10 supervisor-to-be and not the politician. People are hungry for honest, straight-forward answers and a candidate who will stand for them after the votes have been cast.

Stayed tuned for Forum II by emailing d10forum@yahoo.com. Also, there is plenty to learn and to do before the next forum. You are invited to come out every Thursday to the town hall meetings at 195 Kiska Road, behind the Boys and Girls Club, at 7:30 p.m.

Nyese Joshua is a long time resident of Bayview Hunters Point and a San Francisco native. She can be reached at nyesej@yahoo.com.

YO!TV covers the development of the gang injunctions in the Mission and Fillmore District in San Francisco.