Breaking news from a false website: France will pay Haiti, over the course of 50 years, the Independence Debt (17 billion Euro) it extorted by force of arms 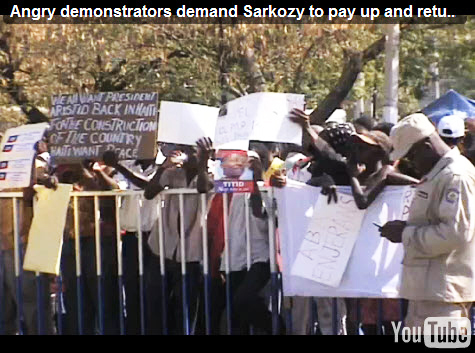 Clinton, Bush, Monsanto’s gift and now France. Wow, how lucky can Haiti be? Clinton apologized, Bush co-chairs earthquake relief and France, well, France cannot be outdone. France will stay with us for 50 years and cough, cough, pay Haiti the Independence Debt (€17 billion) back!

According to a July 14, 2010, statement from a fake website (since removed, though the video is posted below), purporting to speak on behalf of the spokesperson of the Ministry of Foreign and European Affairs, France will pay back to Haiti the Independence Debt it and its Euro/U.S. allies gathered together to force Haiti to pay. It took Haiti 122 years (1825 to 1947) to finish paying France and the endless debt and its continual modifications and recalculation impoverished Haiti for two centuries. (See “French foreign ministry probes fake website!” For information on the very REAL Independence Debt owed by France to Haiti, go to “HLLN Campaign Seven: Demand France pay back the $22 billion Independence Debt: France Vertieres and Ayisyen Ginen.”)

This amazing news is a hoax.

If it weren’t a hoax, there would be a catch somewhere. But even with the hidden Trojan Horse that would have been inserted, it would be good news because France had previously refused to even acknowledge they owed this debt to the people of Haiti. This is a good teaching moment anyway. For if this weren’t a hoax, it would be a good piece of evidence for our children that France has admitted to the Independence Debt. But, first things first. Besides being a good precedent, it would have been a bold move by France. And a big “Thank You!” would go to President Jean Bertrand Aristide, the ONLY Haitian president to ask France to return the Independence Debt. We still say Thank YOU, President Aristide. Thank you.

No matter what the catch is, why this hoax, this is as good a time as any to request, once again, that France ADMIT it was in error and owes Haiti a debt of $21 billion as of 2004. If that is done, the next generation of Haitians will have something to enforce and to lift up the winning struggle of the Ancestors. No matter. We are the Haitians, from the womb to the tomb, our lives are about struggle and we won’t give slack until we’re free and all debts owed Haiti are duly paid.

Long live Jean Jacques Dessalines and the indigenous army that defeated Napoleon. Ayibobo Ayisyen! Ayibobo President Jean Bertrand Aristide for demanding France pay back the Independence Debt. This cost you the presidency and the lives of tens of thousands of Haitians during the Bush Regime Change in 2004, but generations upon generations of Haitians shall remember the price paid for Haiti’s dignity and that Ayisyen continue to pay for their liberty daily.

No matter if the catch today is that France wants to mine Haiti’s seabeds or take its oil, gold, iridium, La Gonave or more of Jacmel. No matter. We’ll meet those challenges also. Alone if we have to, just as we’ve stood for the Independence Debt when all the schooled Haitians who will now start to yack (in French), did not. This, Ayisyen Fran, this, my people, is the best news, if it were true, to be heard since Feb. 29, 2004. Alas, Grenadye a la so … (See “Oil in Haiti, reasons for the U.S. occupation,” Part 1 and Part 2; “Oil Deposits in the Caribbean basin – largest deposit ever”; “Did Gulf oil drilling destabilize faultline cause Haiti quake” and “Did mining and oil drilling trigger the Haiti earthquake?”)

Here are the questions that come quickly to mind: Like all nations, France is motivated by interests, not conscience. So why would they suddenly admit error, like the sudden empty admission of error by Clinton about U.S. destroying Haiti’s agriculture? Uhmmm? If it were true, would this money go to the U.N./Clinton/Farmer relief fund efforts? A French NGO or entity like the Clinton/Bellerive Haiti reconstruction project?

Clinton/Bellerive have their post-quake commission for reconstruction; would France be creating hers behind this benevolent facade to absorb the money that will be returned to Haiti, the way USAID/Clinton/U.N. do with “foreign aid” and “quake relief” to Haiti? (See “The plantation called Haiti: Feudal pillage masking as humanitarian aid” and “Colonization of Haiti’s food and seeds not earthquake relief.”)

Clinton and the U.S. stakeholders have their billions – in pledges and donations – and the private charity/NGO industry has its billions. France would be expanding its role, its part in the “rebuilding of Haiti” with this 50-year-long commitment to “refund Haiti 17 billion Euros?” The hoaxers have a sense of humor, inquiring minds say. Like France would really catch a conscience!

For it’s always about money, resource wars and the interest of the rich few, not that of the poor and the Black masses in Haiti. As I’ve already pointed out, despite all the money collected for earthquake relief, there are more homeless Haitians living on the streets of Port au Prince today, under tents, sheets, tarps, in heavy rains, filth and sweltering heat six months after the quake than there were on the day of the earthquake. Yet billions have been raised in the name of the victims under tarps, sheets and tents. (See “Sarkozy’s visit to Haiti, Independence Debt and Sovereignty.”)

“They don’t give money to help out the kids. They must have hard hearts to let us suffer everywhere,” said a Haiti quake orphan.

Since we’re looking at this hypothetically as if France had made an admission of error, we ask when will the U.S. pay its part of the Independence Debt paid by Haiti from 1914 to 1947? Compensate Haiti farmers for the loss of our agriculture per Clinton’s apology? Compensate Haiti farmers for USAID’s destruction of Haiti’s Kreyòl pigs – the savings of the peasants that was destroyed?

In addition to the money, perhaps France will give President Aristide a free journey on Air France to return home. They might also return the bones of Toussaint L’Ouverture from the cold Jura mountains. The list is simply endless. But this surprise move by France, assuming it were true and not a hoax, would inspires us to listing what’s been taken unjustly from Haiti. More could be listed.

Stay tuned to Ezili’s HLLN (Haitian Lawyers Leadership Network), the only Haitian-led organization to pick up the demand made by President Jean Bertrand Aristide and continue a consistent campaign for its repayment since 2004 under the Free Haiti Movement. Who would get this money if one day our struggle attains it – the Euro NGOS? Or would it be put in trust and run by trustworthy Haitians with good credentials with the poor populace for the benefit of the people of Haiti? (See Ezili Dantò’s “Sarkozy’s visit to Haiti: A Buzzard Looking For a Free Meal? But Haitians Demand Back The Independence Debt and Claim Haiti’s Sovereignty.”)

Anyway, I’ve got a brilliant counter-offer for France. Forget the hoax. Here’s what France can do now. Promises to Haiti, like the promises to Americas’ Black and Indigenous peoples, are hardly ever kept. Recall 40 acres and a mule? Consider to date, six months after the earthquake, the U.S. has delivered zero on the $1B aid pledged to Haiti and the Red Cross is waiting for “later” to spend the half billion it’s raised in the name of the quake victims as they die now.

I say why don’t we nix the hoax, nix the half-century payment plan contemplated by the hoax and just ask Sarkorzy to talk to his good friend, that one little ol’ lady, France’s richest woman, L’Oreal heiress Liliane Bettencourt, who is worth 20 billion Euro dollars and doesn’t seem to know what to do with it. Seems her daughter, Francoise Bettencourt-Meyers, says she’s not suing because she needs the money.

So, France, what say we nix the 50-year payment or any payment plan to Haiti that may come in the future, put the scandal aside about illegal contributions by the heiress to his campaign, have Sarkorzy do right, convince his dear friend, the L’Oreal heiress, to sign over her estate to a Haiti trust for the people of Haiti? Uhmmm? If France wants to do something, she can guarantee collection for Haiti, and we’ll call it a draw?

Sounds like a win-win scenario to me. We all save 50 years of hassling paperwork. Haiti gets paid near to one lump sum. The charming society man accused of conning the 87-year-old mentally frail heiress out of cash and artworks worth 1 billion Euros ($1.2 billion) and even out of an island walks away with nothing. Justice served. Whatchasay?

Ok, ok, you’re right, the butler deserves a reward. Haiti will throw in an extra incentive. We’ll let the butler come and start his very own charitable NGO in Haiti. The butler will now live well like the rest of the NGO executives in Haiti with his own gardeners, cooks, chauffeurs, expense accounts, tax write-offs, exploitation sex with young barefoot Haitian girls or boys with no choice, cars with tainted windows, tropical ocean breeze, sandy beaches and 14,000 U.N. security. C’est magnifique!

Port au Prince, Haiti (HIP) – Thousands of supporters of ousted President Jean-Bertrand Aristide took to the streets on Wednesday (Feb. 24, 2010) as French President Nicolas Sarkozy toured the earthquake ravaged capital of Port au Prince. Holding pictures of the ousted president aloft they chanted for France to pay more than $21 billion in restitution and reparations and to return Aristide as Sarkozy’s helicopter landed near Haiti’s quake damaged national palace. Their demands stem from a long held dispute over compensation a nascent Haiti was forced to pay French slave owners in exchange for recognition of their independence and France’s role in ousting Aristide in 2004.

A group calling itself The Committee for the Reimbursement of the Indemnity Money Extorted from Haiti took credit on Friday for an elaborate hoax carried out this week in which an actor pretending to be a spokesperson for the French government announced that France would reimburse Haiti money it was forced to pay in exchange for its independence in the 19th century.

Video: “A Haiti quake orphan”: Haiti’s orphans still in crisis. Promised aid has not materialized, yet billions have been raised and are available.

“U.S. Has Delivered Zero on $1B Aid Pledged to Haiti”

Flashpoints: “An in-depth look at Haiti six months after the earthquake” Kevin Pina interviews Ansel Herz and also Andre Liohn with more on that Small Fraction Video at the 44:39 minute mark. Haiti interview begins at the 26:34 minute mark. Broadcast July 12, 2010.

Video: “Haiti: heavy rains in the Corail resettlement site” Yet billions have been raised in the name of the victims under tarps, sheets and tents.

“Report Questions NGO Accountability in Haiti” Disaster Accountability Project (DAP) report slams NGOs for shocking lack of transparency, “violating public trust when they have so much cash on hand that would help to alleviate the suffering of the homeless and impoverished. It is now the rainy season and refugee camps and tent cities offer shelters that are little more than sweltering ovens.”

“Sowing Seeds of Hope or Seeds of Dependence?”

“We’ve Lost the Battle, but We Haven’t Lost the War: Haiti Six Months After the Earthquake”