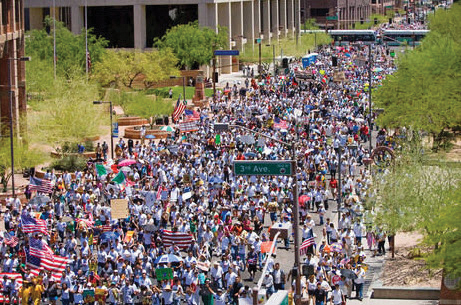 With Arizona’s harsh new immigration law threatening to unleash a wave of racial profiling, Bay Area African-American clergy and community leaders traveled to Phoenix late last month on a four-day solidarity mission. The pastors joined community and faith leaders from across the country for a huge march on Arizona’s capitol and strategized with local ministers and former freedom summer organizers.

Underscoring the urgency of their work, news reports revealed this week that extremist Arizona legislators’ next target is the 14th Amendment, which helped end slavery by guaranteeing citizenship for all born on U.S. soil. Arizona Republicans want to undermine the amendment by denying birth certificates to children born in Arizona whose parents, due to the nation’s broken immigration system, lack legal status.

Rev. Phil Lawson, a Civil Rights Movement veteran, put the journey in context: “SB 1070 harkens back to the worst times in our nation’s history. This law targets Latinos, but who will be next? The same legislature that passed SB 1070 also passed a law requiring President Obama to show his birth certificate to be on the ballot in 2012; and we cannot forget Arizona long refused to honor the legacy of Dr. Martin Luther King Jr. I firmly believe the Black and Latino quest for liberty and justice is one.”

While in Arizona, the group toured detention centers where immigrants are imprisoned, held a press conference at the state capitol and met with Rev. Warren Stewart of Phoenix’s First Institutional Baptist Church. Stewart helped lead the fight to win recognition for MLK Day and opposes the discriminatory SB 1070. The delegation also discussed plans for a 2010 Arizona “freedom summer” with three civil rights organizers of the original 1964 Mississippi Freedom Summer and 20 other ministers from African American and Latino communities.

“SB 1070 harkens back to the worst times in our nation’s history. This law targets Latinos, but who will be next?” – Rev. Phil Lawson

Rev. Woodson worries that economic pain is helping to “carve a new scapegoat”: immigrants. But along with Rev. Lawson and a growing group of Black pastors, he sees another way forward. The African-American community’s more than 200 years of struggle for full citizenship and human rights will be strengthened by building alliances with immigrants, who often face severe exploitation at the hands of large corporations. In a new statement (available at workingeastbay.org/clergy_statement), these pastors say: “As African Americans, we still endure the pain and suffering of exploitative systems destined to harm us disproportionately, but our pain will not silence us to the pain inflicted upon others.”

In the shadow of Arizona’s capitol, Rev. Woodson proclaimed: “Instead of laws that divide us from one another and destroy communities, we need to come together and find real solutions so we can build a better future for all of God’s children.” 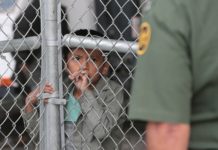