When San Francisco’s Sunset Reservoir solar project is completed later this year, it will be one of the largest installations of its kind in the country. A sea of 25,000 solar panels kicking out five megawatts of clean, green energy, Sunset Reservoir holds the distinction of drawing 30 percent of its project workforce from the city’s most economically disadvantaged communities, including Bayview Hunters Point.

Sunset Reservoir also holds the distinction of being the first solar project in the country to be shut down by a community protest. 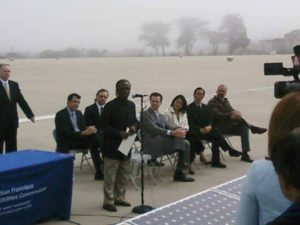 In this instance, the cause of community action was not project contractors Recurrent Energy or BASS Electric, who fulfilled their commitment to hire 21 residents from underrepresented San Francisco neighborhoods on June 22, nor was it project sponsors Mayor Gavin Newsom or Supervisors Carmen Chu and Eric Mar, who have employed over 50 percent city residents overall at Sunset Reservoir. Rather, dozens of community members organized by Bayview-based Aboriginal Blackmen United (ABU) shut down the project after a San Francisco city department picked sides in a labor dispute between the electricians union and laborers union that resulted in three Bayview residents being sent home from the project on June 14.

Even the most qualified of San Francisco’s communities of color have historically struggled to attain opportunities within the local electricians union, leading the Sunset Reservoir contractors to hire union laborers for some of the work based on the laborers’ ability to deliver capable workers from an array of disadvantaged neighborhoods. The June 11 decision by the San Francisco Office of Labor Standards Enforcement that only electricians can perform tasks related to solar power on city projects therefore threatened each and every community worker at the Reservoir.

Fate determined that the first community laborer to be sent home would be Janice Smith, a member of ABU, whose 2003 shut-down of the Third Street Light Rail for failure to hire local Bayview residents was a milestone in the community hiring reform movement. A peaceful protest led by ABU on June 15 caused the Sunset Reservoir to shut down for two days, followed by what the San Francisco Examiner called “crisis talks” with the City on June 16.

A “clarification” of the original Labor Standards decision allowed all workers, including those originally sent home, to go back to work on June 17. Ms. Smith jubilantly skipped through the halls of the San Francisco Public Utilities Commission when she won her job back, joyful that her solar opportunity would allow her to support her family and lead her to more work in an emerging industry.

The Sunset Reservoir experience highlights the challenge of building an all-inclusive green economy, one that lifts all boats, and suggests that corrective action and a realization that organized labor and the working poor need one another now more than ever are necessary if this challenge is to be met. Logic dictates that if the idea of green jobs is to target opportunities for people of color, limited English speakers, women and the formerly incarcerated as we transition to a system based on sustainability rather than on pollution, these individuals must have access to those jobs. And the belief that union jobs, with the wage, benefit and working condition protections that union jobs provide, are the only way to break cycles of poverty and elevated disadvantaged communities is fundamental.

However, if those we seek to empower through “green jobs” are underrepresented within, and lack access to, the trades that ultimately perform the work required to build this new economy, then it is time to recognize what we might rhetorically call the “green jobs myth” or constructively refer to as the “green jobs conundrum.”

Logic dictates that if the idea of green jobs is to target opportunities for people of color, limited English speakers, women and the formerly incarcerated as we transition to a system based on sustainability rather than on pollution, these individuals must have access to those jobs.

The City and County of San Francisco has currently placed all future solar projects on hold, including a plan to put solar panels on top of City Hall, with city officials stating, “We don’t want another Sunset Reservoir.” It is ironic that ABU, the group that gave San Francisco local hiring a good shot in the arm over the past seven years by putting the words, “We don’t want another Third Street Rail,” into the construction vocabulary, has given community hiring in the green era a new catch-phrase.

The City’s “clarification” of its labor decision ends with Sunset Reservoir, and San Francisco environmental and community advocates have suggested that an understanding between laborers and electricians like that which enabled community hiring on Sunset Reservoir, albeit in a circuitous and fireworks-laden manner, is precluded unless the decision is rescinded. A new compromise may be afoot, however, as laborers agree that at least some portion of solar installation is electrical in nature and the electricians union is said to be on the verge of admitting new members into a “solar installer” classification of the trade.

A commitment by the electricians union that 50 percent of the new apprentices in this new solar classification will be qualified residents of those low income communities of color that grew up under decades of pollution from San Francisco’s power plants would erase years of ill will overnight, serve as a bold example of what the “green jobs” movement is about, and plant the seeds of an unbreakable partnership between the community and organized labor in San Francisco.

Green jobs advocates both near and far must take the lessons of Sunset Reservoir to heart, recognizing that it is not enough to simply say “green jobs” and expect that all those who we seek to empower in this movement will benefit.

Joshua Arce is executive director of the Brightline Defense Project, a non-profit advocacy organization committed to protecting and empowering communities through environmental justice and green workforce development. He can be reached at josh@brightlinedefense.org.