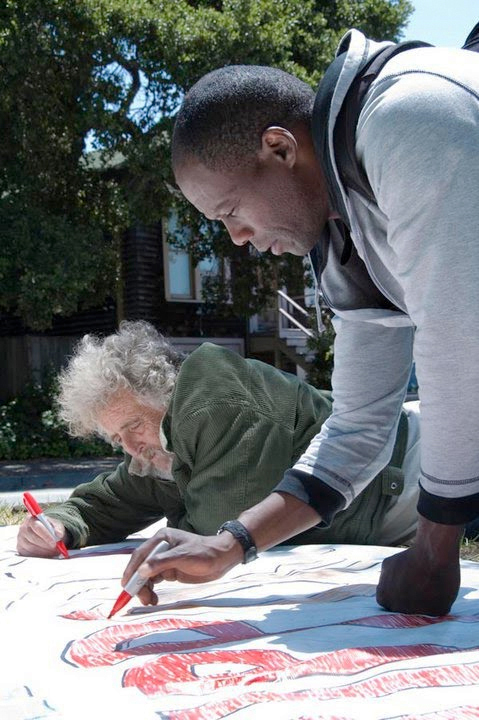 Arnieville is a continuous protest led by people with disabilities alarmed by Gov. Arnold Schwarzenegger’s proposed state budget with its juggernaut of draconian cuts to California’s In-Home Supportive Services (IHSS), Medi-Cal and other critical supports for California’s most vulnerable people. This Thursday, Berkeley’s Arnieville will become the longest-running continuous protest by people with disabilities in the U.S.

Arnieville continues on the median strip of Adeline Street at Russell Street, half a block north of the Ashby BART station. Learn more at http://arnieville.org/and stop by soon.

Friday, July 16, late in the afternoon at Arnieville, we gathered in the sun for a workshop on deaf culture. Suddenly, we heard four or five shots and a short block away. A 29-year-old man, Marcus Mosley Jr., died in his car, murdered. We were horrified and profoundly sad. As the police cordoned the streets, we stood in a circle, holding hands and shoulders, as Marg Hall and Sheela Gunn Cushman managed a few words.

We are guests in this troubled and astounding neighborhood.

Myself, when I think of the Arnieville neighborhood, I think of the East Bay Center for the Blind, the East Bay Community Law Center and the Berkeley Zen Center, which are all down the street in one direction or another. The Long Haul Infoshop gives us use of their sink and hot water and they are close enough that I once helped haul buckets of dirty dishes there on foot. The Berkeley Bowl, one of Berkeley’s centers of retail produce, is two minutes away and surrounded by other retailers.

When I think of this neighborhood, I think of Mary Lou, Blaine, Marg, Nina and Mark, all of whom live nearby. I think of the homeless people – Fireball, Ron, Preston, Paula and Jon – who’ve become valued members of our traffic island protest group. I think of the grassy island across Russell Street and the Ashby BART station.

Now, I will always think of Marcus Mosley Jr. and the screams and wails I heard as his family and friends joined the police and fire trucks. As the evening drew on, Jane Stillwater, who has written about Arnieville for her blog, http://jpstillwater.blogspot.com/, arrived. Marcus had played with her children and she knew his family. The next morning, long time disability activist Jana Overbo, emailed that Marcus was the only son of her long-time attendant Juanita Ruiz.

Yesterday, Saturday was a festival and rally at Arnieville. Country Joe MacDonald came for a benefit concert, Sandi Yi did a bake sale, Michael Parenti and Osha Newman spoke and Alan Senauke led us in a meditation for Marcus. Afterward, we marched and rolled to Berkeley with signs and chants. We told more people about the death and suffering that will come if the state of California cuts deeper into programs that affect seniors, people with disabilities and poor people. 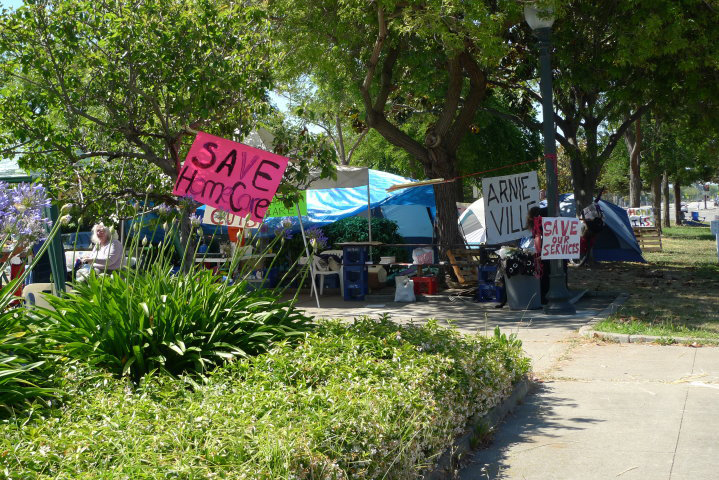 Adrienne Lauby is a Bay Area journalist and a producer and host of Pushing Limits, the disability rights show broadcast on KPFA 94.1 on first, third and fifth Fridays at 2:30 p.m. and available and archived through http://pushinglimitsradio.blogspot.com. She can be reached at adrienne@sonic.net.

The poor people’s plate: Poverty, race, GMOs and our food

Wells Fargo, king of private prisons, shut down for the day; seven arrested