Three critical events July 8, 14 and 15 need your support – details below 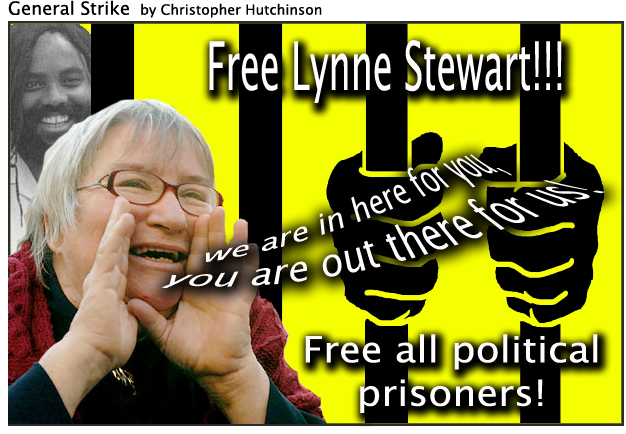 Lynne Stewart has been a real people’s lawyer for over four decades, representing some of the most politically polarizing cases in this nation’s history. She has been of legal service to people like Black political prisoner Sekou Odinga of the Black Panther Party and Black Liberation Army, former government drug dealer Larry Davis, who ended up shooting multiple members of the NYPD who came to kill him after he wanted to quit selling drugs, and many others.

Her current conviction, which the Bush regime used to push the Patriot Act, deals with her representation of the blind sheik the U.S. government accused of trying to blow up the World Trade Center in 1993. Within the next few days, she is set to be re-sentenced. We want all of our readers to know and assist in any way that they can People’s Lawyer Lynne Stewart, who is a modern-day legal John Brown.

M.O.I. JR: Can you give a little bit of history about your mother’s legal career? Who are some of the high profile people that she has represented?

M.O.I. JR: How has the government responded to Lynne Stewart representing these people?

Brenna Stewart: Not well, they hate getting beat. They don’t mind if someone has politics but isn’t such a great lawyer. They hate it when the lawyer is good and she has good politics.

M.O.I. JR: Can you give us the history on this case that she is currently wrongfully being held captive for?

Brenna Stewart: Easier to get this in detail from the website www.lynnestewart.org. In a few words she represented the sheik in the first World Trade Center bombing and as a result of that and many years later post- 9/11, the Bush administration made her a scapegoat and used the case against her to further the Patriot Act and to stop lawyers from representing unpopular clients – political clients, especially Muslims.

M.O.I. JR: She has recently been battling cancer. How is her health?

Brenna Stewart: She is in as good health as possible for a 70-year-old in jail. Two biopsies ruled out active cancer. Of course that doesn’t mean it won’t return, but there is nothing now of great concern.

M.O.I. JR: Can you explain the conditions she is being forced to live in while in prison?

Brenna Stewart: Typical prison conditions, but she’s 70, so worse. She rarely goes outdoors for recreation; they have terrible horrible food; the TV is always on some Jerry Springer type ish. There are many sad cases of women in there with her – the same peeps she used to represent – and it breaks her heart every day.

The worst part of it is the deprivation of friends and family and arbitrary and capricious treatment. For example, they take her to hospital for tests only on the one day of the week she has a family visit. It has happened two or three times. Her hands and feet are shackled to and from and at the hospital. The police raid rooms in which more than four books is “contraband.” They implement strip searches, and more.

M.O.I. JR: What is it that people can do to support the people’s lawyer, Lynne Stewart?

Brenna Stewart: Come out to the three events here in New York. If you can’t support in body, support in spirit.

M.O.I. JR: How can people get more information online about the case of Lynne Stewart? What is the contact info for the Lynne Stewart Defense Committee?

Brenna Stewart: The Justice for Lynne Stewart website is www.lynnestewart.org, and the contact is (Lynne’s husband) Ralph Poynter, (917) 853-9759, ralph.poynter@yahoo.com or 1LawyerLeft@gmail.com.