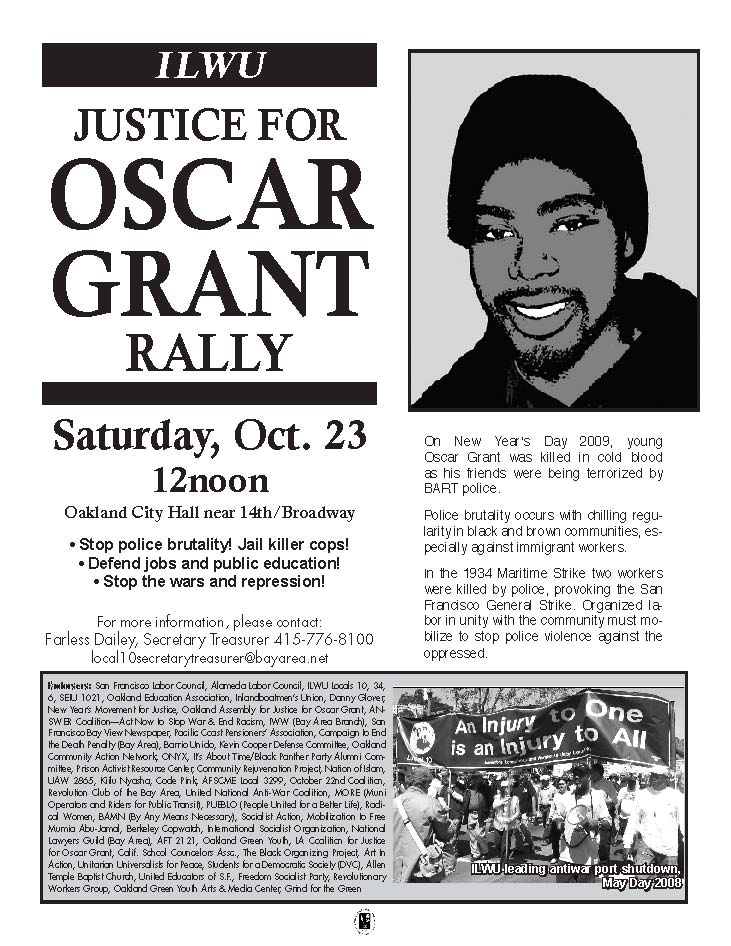 Emotions ran high when longshoremen at their July membership meeting were addressed by Cephus Johnson, the uncle of Oscar Grant, the young Black man who was killed by a cop at the Fruitvale BART station in Oakland on New Year’s Day 2009. Recounting the sidewalk mural in the front of the hiring hall near Fisherman’s Wharf that depicts two strikers lying face down with the inscription, “Two ILA (longshoremen) Shot in the Back, Police Murder,” he appealed to the union to support justice for his slain nephew. He said, “That mural shook me because that’s exactly what happened to Oscar.”

It got even hotter in the union hall when Jack Bryson took the mike. He is the father of two of Oscar Grant’s friends terrorized by police at the train station as they sat handcuffed and helpless watching their friend die and hearing him moan. Bryson reported that police were calling for a rally the following Monday in the lily-white suburb of Walnut Creek to demand that Johannes Mehserle, the convicted killer cop, go free. He asked the union members to join Oscar Grant supporters to protest the cop rally and they did. Outnumbering the 100 or so pro-Mehserle demonstrators by 3 to 1. 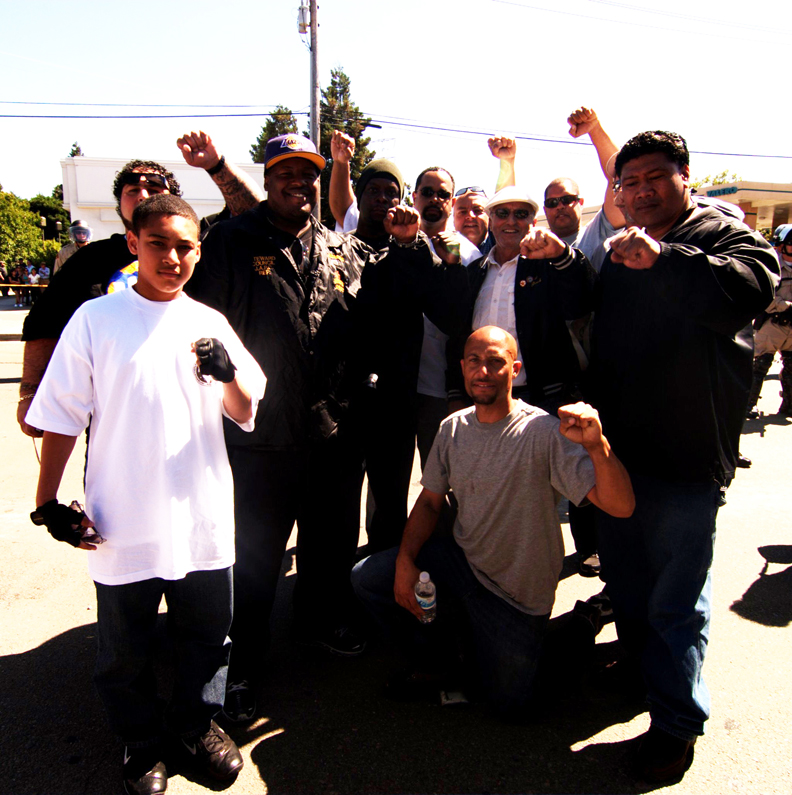 The New Year’s Day horror scene was videotaped by other young train passengers and broadcast on YouTube and TV news across the country. Grant, the father of a 4-year-old girl, worked as a butcher’s apprentice at Farmer Joe’s supermarket nearby on Fruitvale Avenue. The litany of police killings of innocent young Black and Latino men has evoked a public outcry in California. Yet, when it comes to killer cops, especially around election time, with both the Democratic and Republican parties espousing law and order, the mainstream media either expunges or whitewashes the issue.

Angered by the pro-police rallies and news coverage calling for killer cop Mehserle’s freedom, Local 10 of the International Longshore and Warehouse Union has called for a labor and community rally on Saturday, Oct. 23, in Oakland to demand justice for Oscar Grant and the jailing of killer cops. Bay Area ports will shut down that day to stand with the Black community and others against the scourge of police brutality. 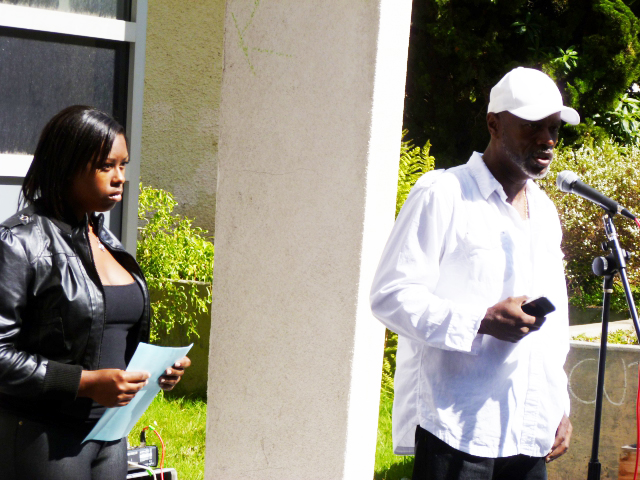 Anthony Leviege, a longshore union rally organizer, said: “Many unions, including the San Francisco and Alameda Labor Councils, have endorsed and are mobilizing for the rally. They see the need in the current economic crisis to build unity with the community to defend jobs, public education, health care and housing for all. And unions defending Black and Brown youth against police brutality is fundamental to that unity.

In this race-caste society, there’s nothing more controversial than a white cop convicted of killing a young Black man like Oscar Grant … or of a Black man like Mumia Abu-Jamal, framed by a corrupt and racist judicial system, accused of killing a white police officer when the opposite was the case. Jamal was nearly murdered by the police. His “crime” was that he didn’t die on the spot, as Oscar Grant did.

Mumia, the Frederick Douglass of our time, exposes the hypocrisy of democracy in America while fighting for his life on death row in Pennsylvania. His possibly final hearing is set for Nov. 9. Killer cops belong in jail, their victims – those who survive like Mumia – should go free. But that’s not how justice in capitalist America works. The racist heritage of slavery is still with us. 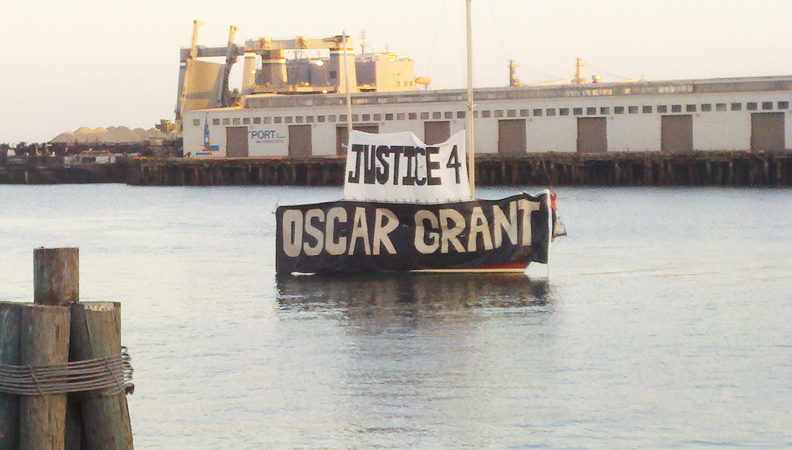 Despite the election of its first Black president, the United States has still not moved beyond the Supreme Court’s 1857 Dred Scott decision that “the Negro has no rights which the white man was bound to respect.” Just how deeply racism is embedded in the fabric of American society can be seen in President Obama’s “teachable moment” in the case of Harvard professor Henry Gates – arrested by police for “breaking into” his own home! The president, a friend of Professor Gates, upon hearing of the bizarre arrest, called it a stupidity.” When police loudly objected, Obama quickly and apologetically retracted his characterization in a photo op with the cop, the professor and him over a friendly beer. 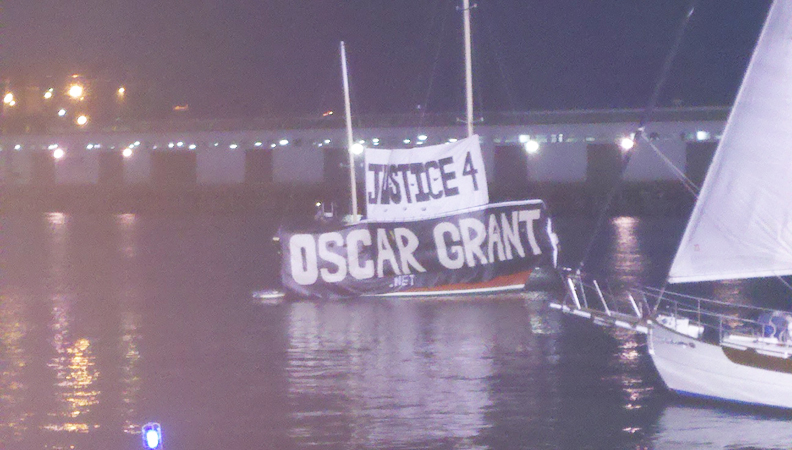 Civil rights activists who were targets of racist attacks used to joke that the KKK wore white at night and blue in the daytime. Killer cop Mehserle was convicted of “involuntary manslaughter,” though the videotapes show him shooting Grant as he lay passively face down about to be handcuffed. The media universally has tainted outraged protesters, blaming them for rioting while favoring Mehserle whose sentencing hearing is set for Nov. 5. During a recent Giants’ baseball game in San Francisco, Mehersle’s father was sympathetically interviewed on TV. But where is the justice for Oscar Grant’s family and his now 5-year-old daughter?

Labor must defend people of color against racist police attacks

The police murder of two strikers provoked the 1934 San Francisco General Strike. Seven maritime workers in all were killed by police in West Coast ports during the strike for the union hiring hall. Every July 5, Bloody Thursday, all ports on the West Coast are shut down to honor the labor martyrs. It’s a living legacy that burns deep in the hearts of longshore and other maritime workers. 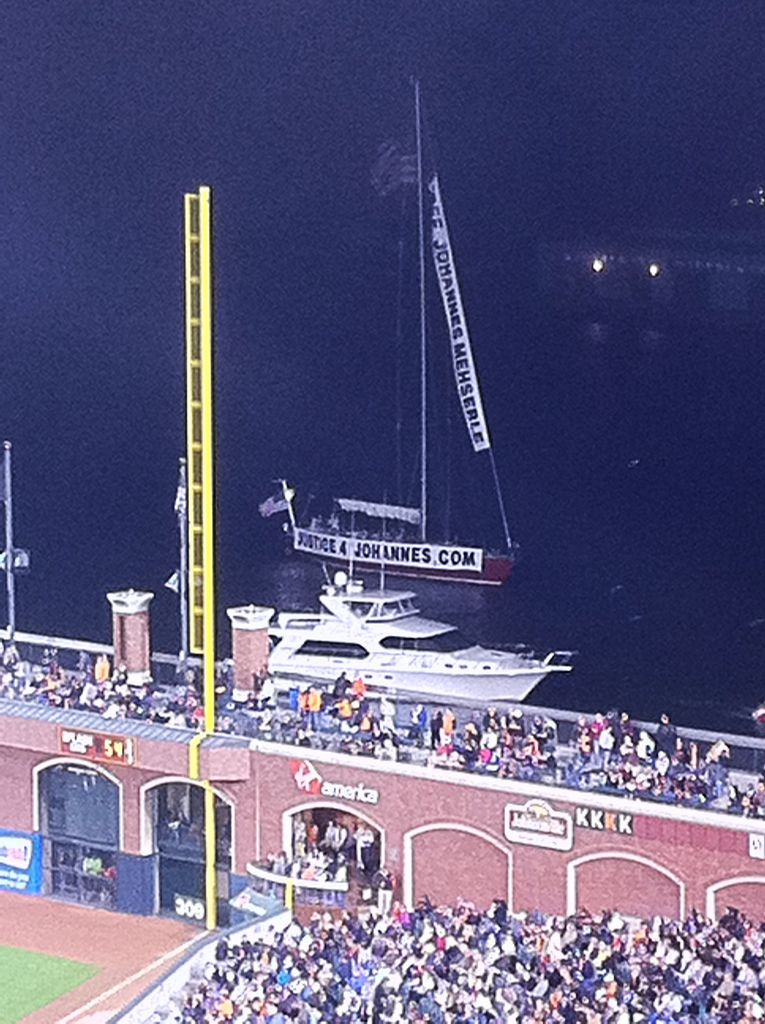 Some have asked, what’s the connection between unions and the killing of a young Black man? Plenty, according to Richard Washington, an Oakland longshoreman. He recalled the history of the longshore union and its struggle against the favoritism and racism of the “shape-up” hiring system that preceded the union hiring hall. At the start of the 1934 San Francisco Maritime Strike, Harry Bridges, head of the militant Strike Committee, he said, appealed to the Black community. Strikers implored Blacks to support the strike and vowed to share work on the waterfront after their victory in the midst of the Great Depression when jobs were scarce, not unlike today. Blacks were integrated on the docks, a shining example being set by the San Francisco longshore local, and the union has been fighting against racist attacks and for working class unity since then.

A wall mural in the union hiring hall depicts the Red Angel, Elaine Black, of the International Labor Defense (ILD) during the ‘34 Big Strike which defended strikers. ILD has a rich history in the radical labor movement, originally headed up by James P. Cannon, an early leading communist. The ILD’s pioneering class struggle defense began with the mass labor demonstrations defending Italian anarchist immigrant workers Sacco and Vanzetti, uniting all of the labor movement regardless of political differences.

In 2003, at the start of the U.S. war in Iraq, protesters in the port of Oakland and longshoremen were shot by Oakland riot police with “nonlethal” weapons. The U.N. Human Rights Commission condemned this police attack as “the most violent” police attack on antiwar demonstrators. Then-mayor Jerry Brown, now backed by the police in his bid for California governor, gave cops the green light. The rationale for the bloody attack was given by a spokesman for the state’s anti-terrorism agency newly formed by Democratic Gov. Gray Davis and Attorney General Bill Lockyer. The spokesman for the California Anti-Terrorism and Information Center in a twisted tautology said that anyone demonstrating against a war against terror could be a terrorist themselves. The OPD attack cost the city of Oakland a couple of million dollars when the dust settled. 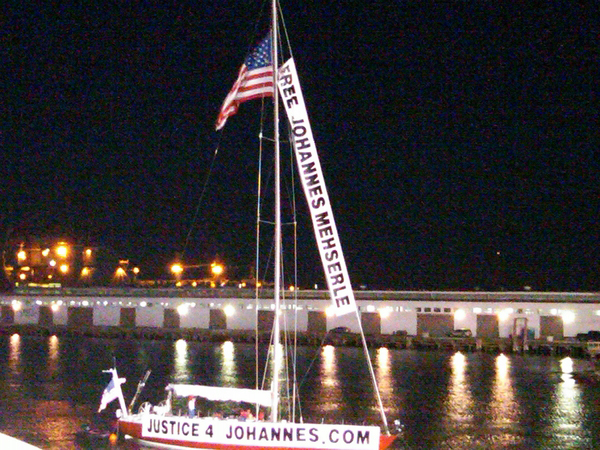 ILWU longshoremen have given up a day’s wages time and again to show solidarity with dockworkers in Liverpool, England, Charleston, South Carolina, and Australia and to protest with dock actions on moral issues of the day like apartheid in South Africa, the wars in Iraq and Afghanistan, in defense of innocent death row prisoner Mumia Abu-Jamal and recently the Israeli military killing of civilians bringing aid to Gaza by boat.

Now, the ILWU is calling on unions to link up with community organizations under their banner, “An Injury to One is an Injury to All.” From all accounts it’s a clarion call that will muster thousands fed up with the economic crisis and the scapegoating of minorities.

Jack Heyman, a working longshoreman, sits on the executive board of ILWU Local 10 and the board of directors of the John Brown Society. He has been active in all of the union’s struggles mentioned in this article. He can be reached at jackheyman@comcast.net.

The importance of organizing for Justice for Oscar Grant 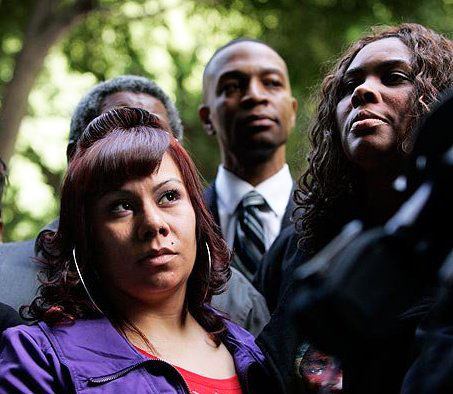 It would be one thing if people in Oakland sat back and just complained and this was the result, but Oakland isn’t like that. I saw people rise to the occasion and do all the right things. Seeing folks from all walks, ages and ethnic backgrounds come together, link similar struggles and seriously put their shoulders to the grind in the name of getting justice for Oscar Grant and his family was breathtaking.

There were town halls held every single week at Olivet Baptist Church in West Oakland. There were dozens of marches, sit-ins, teach-ins, speak-outs and fundraising concerts. A number of artists created songs for the cause. Others made T-shirts and posters.

Coalitions were formed and bridges built, linking elected officials, activists and folks from different communities who saw Oscar Grant not only as a young Black man who got killed but as someone who could just as easily have been them or a member of their community. When the trial moved to Los Angeles, organizers from the Bay Area linked up with organizers in L.A. to form tight coalitions.

Most importantly, people sat down and developed strategies with the Grant family, who have been a source of inspiration and have been incredibly strong throughout these past 18 months. The end result was an impressive string of victories that included an unresponsive Alameda County District Attorney Tom Orloff and BART Police Chief Gary Gee being forced to step down and resign, two of the officers on the platform with Mehserle – Tony Pirone and Marysol Domineci – being fired, and BART itself being investigated by an outside firm, which concluded that the agency mishandled the shooting case and had inadequately trained its police officers.

Minster Keith Muhammad, who heads Nation of Islam Mosque 26B in Oakland and has held weekly organizing meetings since the murder of Oscar Grant, can be reached at ministerkeith@sbcglobal.net.

Justice for Oscar Grant Rally: Rain falls but does not end the call to rein in injustice

Live from the Mehserle courtroom: an interview with Uncle Bobby, Oscar Grant’s uncle