This Oct. 21, Jambonews met with Raïssa, the eldest daughter of Victoire Ingabire. [Ingabire, who is widely considered the leader of the political opposition in Rwanda, has been jailed in Kigali, where evidence indicates she is being tortured. – ed.] Tall and slender, the 21-year-old smiled and projected a positive attitude, which surprised us considering her situation.

She told us: “I try to put my feelings aside in order to help my mother as much as I can. I try to remain strong, to care for my little brothers, because I know that this is the best way I can help my mother.”

The last time she spoke with her mother was the day before her arrest. “We spoke normally. We were cool; we laughed. With my mother, we have always been comrades. We talk about everything, and for me it is difficult to imagine her as a politician. So far, it is the last time that I was able to speak with her.”

Last Friday, the Rwandan Embassy in Holland, however, promised Raïssa that she would be able to speak with her mother within 48 hours. “I told the ambassador that as far as I am concerned, I should not be considered a politician. If I talk to my mother, I would not ask her about the situation in Rwanda or ask her what any witnesses have stated, but simply, Mama, how are you? All I wish for at this time is just to hear my mother tell me that she is OK.

“The ambassador listened to me attentively. She understood my situation. She seemed to want to help me, to the point that I believed it. But when one closes the door in someone’s face, it means one does not want to help. She started by elaborating on different ways to help us, but as soon as she decided it was time for us to leave, it was all over. Her attitude radically changed, and she left me in the dark regarding my mother’s situation. The ambassador talked to me and listened to me as a mother would, but she reacted as an ambassador.”

Last Monday, we came back, but we were refused entry and the embassy called the police, who escorted us out.

The ambassador talked to me and listened to me as a mother would, but she reacted as an ambassador.

Ever since, Raïssa’s days have been full. Speaking to everyone who will listen, from left to right, she informs, she sensitizes, because she believes in the value of word of mouth. “A lot of people are not aware. They are surprised, shocked to hear the situation. The Dutch do not understand why their government is not doing anything, but I think that it is critically important that they ask themselves questions.

“To take action like this is the only way that I can keep myself from feeling powerless.”

When she is asked what she expects from the Rwandan community, she tells us that she wishes, first and foremost , that they become aware of the situation, that they know that her mother had a family, a job, a comfortable life in Holland before she left it all behind to take on the struggle in Rwanda. She fought for the people of Rwanda, and now that she is in prison, more than ever she needs the people of Rwanda.

Raïssa adds with emotion: “What I wish is for people to grasp that an innocent woman is in prison, that this woman could be their sister, their mother, their daughter.”

What holds true for her mother, according to Raïssa, also holds true for other political prisoners. She wishes that more people would understand their struggle and fight against the injustice that strikes them.

What I wish is for people to grasp that an innocent woman is in prison, that this woman could be their sister, their mother, their daughter.

“Today I speak for my mother, but I know that there are other political prisoners who deserve the support that my mother needs.

“Imminently, what I ask from the Rwandan community in Holland and surrounding countries is to come [to a rally] this Saturday, Oct. 23, at 11:30 a.m., to the central train station of Den Haag, opposite the Foreign Affairs Ministry.

“We want the Dutch government that finances Rwanda to use its influence, use this leverage to pressure Rwanda for a change,” she told us.

“Holland is a country that advocates for human rights, freedom of expression, democracy, and I have trouble understanding their support of a regime that imprisons people who express different opinions from those of the government.”

In the immediate future, there will be a rally this Saturday, Oct. 23, 11:30 am, at the central train station of Den Haag.

“The more people come, the more power we will demonstrate. So please, come in great numbers. This is a long road; every step counts. Saturday is one step among others, and I hope that there will be many more and that we will grow in numbers.”

When we asked her what she would do if she could turn back the clock, she does not hesitates one second: “Even though it is difficult for me, I would let her leave again, because my mother does what she thinks is just. To prevent her from being involved in politics and fighting for a more just Rwanda would be to destroy a part of my mother. Some have mothers who are singers, who sing to them. Others have mothers who are nurses, who provide medical care for them.

“Personally, I have a mother who is a politician – who inspires me. Therefore, if I could turn back the clock, I would encourage her to leave again because politics is part of her.

“Even now, despite the turn of events, I am proud of her because she is fighting for what she always believed in.

“My mother taught me to live my life as I please, to never to let any obstacle block my path, never let any obstacle prevent me from doing what I want. That is the one of the greatest life lessons that I learned from my mother.

This interview first appeared on Jambonews in French. This is its first publication in English, thanks to the translation services of mesha Monge-Irizarry of the Idriss Stelley Foundation, who can be reached on Facebook or at (415) 595-8251. 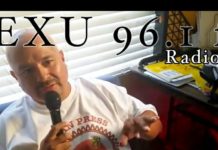