Don’t miss the great Randall Robinson discussing ‘An Unbroken Agony: Haiti, From Revolution to the Kidnapping of a President’ with Pierre Labossiere of the Haiti Action Committee and Walter Turner of KPFA’s Africa Today on Saturday, Oct. 16, 5 p.m., at the Black Repertory Theater, 3201 Adeline St., Berkeley – presented by Marcus Books, benefiting the Haiti Emergency Relief Fund 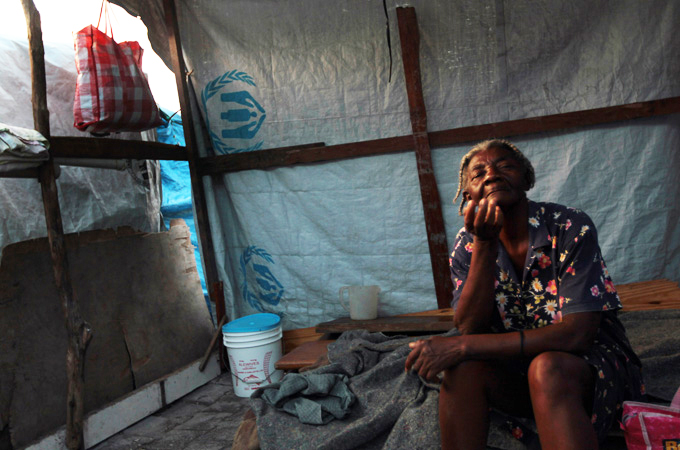 “If it gets any worse,” said Wilda, a homeless Haitian mother, “we’re not going to survive.” Mothers and grandmothers surrounding her nodded solemnly.

We are in a broiling “tent” with a group of women trying to raise their families in a public park. Around the back of the Haitian National Palace, the park hosts a regal statute of Alexandre Petion in its middle. It is now home to 5,000 people displaced by the January 2010 earthquake.

Nine months after the quake, over a million people are still homeless in Haiti.

Haiti looks like the quake could have been last month. I visited Port au Prince shortly after the quake and much of the destruction then looks the same nine months later.

The Associated Press reports only 2 percent of the rubble has been removed and only 13,000 temporary shelters have been constructed. Not a single cent of the U.S. aid pledged for rebuilding has arrived in Haiti. In the last few days the U.S. pledged it would put up 10 percent of the billion dollars in reconstruction aid promised. Only 15 percent of the aid pledged by countries and organizations around the world has reached the country so far.

With other human rights advocates from the Center for Constitutional Rights, MADRE, CUNY Law School, Bureau des Avocats Internationaux (BAI) and the Institute for Justice and Democracy in Haiti, I am huddled under faded gray tarps stamped U.S. Aid. Blue tarps staked into the ground as walls. This is not even the hot season, but the weather reports the heat index is 115.

The floor is bare dirt, soft from a recent rain. Our guide works with a vibrant grassroots women’s organization, KOFAVIV, which is working with women in many camps, and she encourages residents to tell us their stories.

Anne has seven children. She would really love to have a tent. She and her family live on a small plot of dirt 8 feet by 8 feet. Sheets are tied to pieces of wood to keep out the sun. Plastic sheeting covers the ground.

When it rains everything they have is soaked. She begs every day for food.

Therese has three children, 12, 11 and 9. She has lived in the camps since the quake. A few weeks ago when she went to get a bucket of water, some men grabbed her and raped her. Before the quake she worked as a street vendor but has no money to buy supplies to sell. She prays all day every day for help.

Caroline lived with her husband and three children in an apartment in downtown Port au Prince. The quake took her husband and left the rest of the family homeless. She was raped in the first camp she settled in. When she moved, she was raped again and fought back with KOFAVIV. She and other women set up their own security with whistles and flashlights to protect each other. They push the police to arrest. Her life is now in danger because the rapists know who she is, and she is vulnerable.

We hear from dozens of other mothers and grandmothers – Alana, Beatrice, Celine, Marcie, Rene, Wilda and others. This is what they tell us.

There is no electricity at all in the camps. Some have lights on poles that work some of the time. Many have no lights at all. 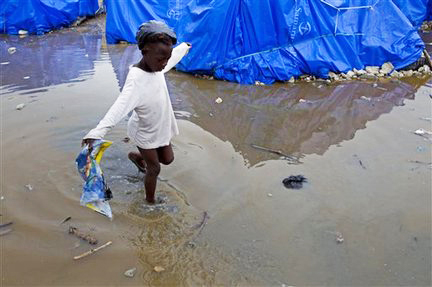 There is no food. The children are terribly hungry. The food aid program was terminated in April and nothing took its place. The authorities cut off the food so people would leave the camps, but where is there to go?

Water is hard to find. For the people in Petion Park, water is delivered by truck to a central site a block or two away in the middle of several camps.

Thousands of people line up twice a day to get water before it runs out. In another camp we visited Sunday, Camp Kasim, there was no water at all for hundreds of families and none scheduled to be delivered until Monday at the earliest. Boys and girls surged around a pipe several blocks away trying to capture some water in Oxfam marked buckets.

People are coughing, sniffling and their eyes watering. Quiet babies are the norm. Many people have skin rashes and vaginal infections. There are several volunteer clinics but usually only the very sickest are seen because so many people need help. The biggest camps now have some toilets but not enough. Drainage is a big problem especially now during the rainy season.

Children cannot be kept in the suffocating tents. They play in the muddy paths. They would love to return to school but there is no money.

Security is a huge problem. Less than a dozen of the thousand plus camps have official security at night. During the day the police may come around or maybe the heavily armed MINUSTAH U.N. forces will patrol. But at night security forces vanish. With little or no light at night, tens of thousands of unguarded sheet structures and canvas walls offer thieves and gangs an inviting target.

Violence against women and girls is widespread. Women who go to the latrines at night are attacked. Some women talk of carrying rape babies. Others will do anything for the crudest abortion. When they go to the police and ask them to investigate, officers demand money for gas. Even those who pay the police usually end up frustrated. There is a sense of impunity.

There are an estimated 1,300 “camps” of homeless people in Haiti. Homeless people live literally everywhere. People are camped in the middle of many streets. Shanty structures are built right up to the edge of streets. Every park, every school yard, every parking lot appear to have people living under sheets or lean-to tents.

The most fortunate families live in modest plastic tents. The newest tents are royal blue with red flags with yellow stars on them – donated in the last week from China. Less fortunate families, and there are many of them, live under faded sheets stretched between wooden poles made from tree branches. Within the camps there are dirt paths – some only inches wide. Tents and sheet shelters are side by side – inches apart.

Evictions are starting. Churches are pushing people off their property. Schools which are reopening are turning off the water to the people camped in the ball fields. Some in authority are openly saying that people must be forced out the camps. But only 13,000 temporary structures have been built and they are far away from family, school, jobs and healthcare. There is no place to go.

The U.N., which effectively runs Haiti with the Haitians and the U.S., holds meetings nearly every day to coordinate responses to dozens of issues like security, food, water, reconstruction and gender violence. Human rights advocates in Port au Prince complain that no meetings are conducted in Kreyol, the language of the Haitian people.

Yet there is hope. The Haitian mothers and grandmothers we heard from are fighting for their lives. KOFAVIV and BAI and other grassroots human rights groups are speaking out, demonstrating, educating the people in the camps and working together for social justice.

During a torrential downpour Saturday, dozens gathered on folding chairs under the front porch overhang of BAI to work on how to get the U.S., the U.N., Haiti and the NGOs to do their jobs.

Meanwhile, Wilda and a million other Haitians are slowly dying from starvation, illness, lack of security and neglect. Nine months after the quake.

Bill Quigley is legal director of the Center for Constitutional Rights and a professor at Loyola University New Orleans College of Law. He has worked in Haiti for years with Bureau des Avocats Internationaux and the Institute for Justice and Democracy in Haiti. He wrote this article from Port au Prince with help from Laura Raymond and Sunita Patel. You can contact Bill at Quigley77@gmail.

From the Bay Area to Port-au-Prince: Creating Food Sovereignty in Haiti

This is another event not to miss – on Thursday, Oct. 14.The keynote speaker is Pierre Labossiere, Haitian activist with the Haiti Action Committee, who will frame the evening, followed by discussions focused on how Food Justice and Food Sovereignty are working out on the ground in Haiti and locally.