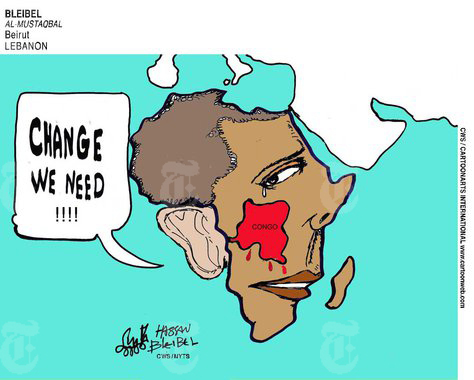 The official Oct. 1 release of the U.N. Report on Human Rights Abuses in the Democratic Republic of Congo, 1993-2003, documenting the Rwandan and Ugandan armies’ massacres of Rwandan Hutu refugees and Congolese Hutus in the Democratic Republic of Congo, should be a defining moment for President Barack Obama. How will the USA’s first African American president respond to the detailed and widely publicized U.N. documentation of genocide in the heart of Africa, committed by the USA’s longstanding military proxies, the armies of Rwandan President Paul Kagame and Ugandan President Yoweri Museveni?

Few Americans realize that the Rwandan and Ugandan armies are armed and trained by the U.S. or that the U.S. military uses both countries as staging grounds, but they may learn about it now.

Few realize either that the sole piece of legislation that President Obama shepherded into law on his own, as a Senator, was S.B. 2125, the Obama Democratic Republic of the Congo Relief, Security, and Democracy Promotion Act of 2006, in which, in Section 101(3), he quoted USAID:

“Given its size, population, and resources, the Congo is an important player in Africa and of long-term interest to the United States.”

Indeed. In 1982, the Congressional Budget Office’s “Cobalt: Policy Options for a Strategic Mineral” noted that cobalt alloys are critical to the aerospace and weapons industries, that the U.S. has no cobalt worth mining, that 64 percent of the world’s cobalt reserves are in the Katanga Copper Belt running from southeastern Congo into northern Zambia and that control of the region is therefore critical to the U.S. ability to manufacture for war.

Foreign powers and corporations’ determination to control Congo’s cobalt and the rest of its dense mineral resources has made the Congo conflict the most lethal since World War II.

“(5) The most recent war in the Democratic Republic of the Congo, which erupted in 1998, spawned some of the world’s worst human rights atrocities and drew in six neighboring countries. 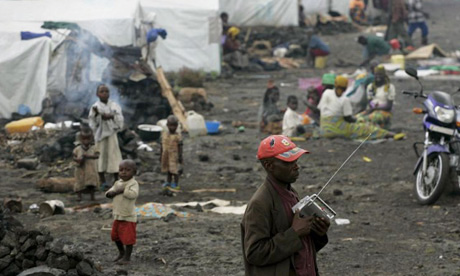 What Obama identified as the “real and perceived presence of armed groups hostile to the Governments of Uganda, Rwanda, and Burundi” was, most of all, the real and perceived presence of “Hutu militias.” They were indeed the “pretext” for the predominantly Tutsi Rwandan Patriotic Army’s massacres of Hutu civilians, Rwandan Hutu refugees and Congolese Hutus, with the help of the Ugandan People’s Defence Force – massacres now documented in the U.N. report leaked to Le Monde on Aug. 26, then officially released Oct. 1.

On the same day, the Christian Science Monitor, in “Rwandan Troops enter Democratic Republic of the Congo,” reproduced the pretext that Obama had identified in S.B. 2125:

“Rwandan troops entered the Democratic Republic of Congo on Tuesday to tackle a Rwandan Hutu militia whose leaders are accused of taking part in the 1994 Rwandan genocide before fleeing to Congo.”

Since Obama understood the pretext in 2006, he no doubt understood it that day and no doubt understands it today, as Rwandan and Ugandan troops are rumored, once again, to be moving into Congo, despite international outcry about the U.N. report.

Hutu militias and other “rebel militias” in Congo can no longer serve as the devil, the eternal excuse or, as Obama said, the “apparent pretext for intervention in the Democratic Republic by Congo’s neighbors.” Most of all, they can no longer serve as the devil, the excuse and pretext for interventions by Paul Kagame, the general turned president and so long heroized as Rwanda’s savior, because Kagame’s own army’s massacres of Rwandan and Congolese Hutu civilians has now been documented in the U.N. report.

The leak and now the official release have finally magnified President, then-Senator, Obama’s obscure, still little known revision of the East-Central African story in his 2006 legislation, S.B. 2125, which then became Public Law 109-456.

John Prendergast and David Eggers, the ENOUGH Project’s tireless advocates for U.S. intervention in Sudan, suggested, in a New York Times op-ed that Obama’s “Rwanda moment,” like Bill Clinton’s in 1994, is now in Sudan, where, they say, Obama has a chance to do what Bill Clinton reputedly failed to do in Rwanda, intervene to stop genocide.

But Obama’s Rwanda, and Congo, moment is in Rwanda and Congo now, as the world reviews the U.N. report and Rwandan troops once again advance into Congo.

He doesn’t need to intervene but to stop intervening, by withdrawing the military support, weapons, training, logistics and intelligence for Kagame, support that has so long equaled intervention. If he did so, peace and human rights activists all over the world would stand behind him and the narrative revision that he quietly penned three years ago.

An Obama decision to stop supporting Kagame would go up against the last 30 years of Pentagon intervention in the Great Lakes Region of Africa, but the U.N. Report turns his 2006 narrative revision into an outright reversal – with the weight of the United Nations High Commission on Human Rights and growing international opinion behind it.

And Obama is the commander-in-chief, with absolute executive authority over the U.S. armed forces. Yes, he can, should he choose to.

In this video, posted to YouTube July 9, 2008, during the run-up to the U.S. presidential election, Congolese star Mbilia Bel dedicates her song, “Nakei Nairobi” (“Off to Nairobi”), to her hopes and the hopes of all Africa for Barack Obama, a true son of Africa, to win the most powerful position in the world. “Today, North America Congolese communities choose the famous song to show our support to the next president of United States of America, Senator Barack Obama, whose father, Obama Senior, was a big fan of Mbilia Bel,” writes “compukin,” who posted the video.

Here is the same song as it was recorded by Mbilia Bel in 1974. This video translates the lyrics into English. President Obama’s father was undoubtedly familiar with this song.