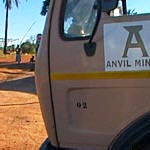 Montreal, Canada – An association representing Congolese citizens filed a class action on Monday, Nov. 8, in a Montreal court against Canadian company Anvil Mining Limited. It is alleged that the company, by providing logistical assistance, played a role in human rights abuses, including the massacre by the Congolese military of more than 70 people in the Democratic Republic of Congo in 2004. The citizens have brought the claim through an association of relatives of victims and survivors which is supported by a coalition of Canadian, international and Congolese non-government organizations.

“This case is now in Canada because Anvil is a Canadian company and must be held accountable for any role it played in what were clear and egregious violations of human rights,” said Matt Eisenbrandt, legal coordinator of the Canadian Centre for International Justice.

“Every day is a struggle to survive, and we feel abandoned,” said one of the group members, Dickay Kunda, whose father was badly beaten and tortured while in military custody. Though released after six months, his father died in November 2009. “We have no option but to turn to the international community for justice.”

The group, the Canadian Association against Impunity, alleges that in October 2004 Anvil provided trucks, drivers and other logistical support to the Congolese military to help them counter an attempt by a small group of rebels to take over the town of Kilwa, a key port for Anvil’s operations. In the course of this operation, serious human rights violations were reportedly perpetrated against the civilian population by the military. Anvil’s vehicles transported Congolese soldiers, as well as civilians, who were allegedly taken outside the town and executed by the military. The group also alleges that Anvil allowed soldiers to use planes leased by the company to reach Kilwa from Lubumbashi, the capital of Katanga province.

“Anvil’s material support enabled the Congolese army to reach the remote town of Kilwa at top speed – where they then carried out widespread abuses against the civilian population,” said Tricia Feeney, director of UK-based Rights and Accountability in Development (RAID). Anvil Mining has denied any allegations of wrongdoing and asserts that its logistical support was requisitioned by the authorities.

The Canadian action follows a controversial military trial in the Congo. In 2006, a Congolese military prosecutor indicted nine Congolese soldiers for war crimes and three expatriate former employees of Anvil for complicity in war crimes. Following numerous irregularities, in June 2007 the military tribunal acquitted all the defendants.

“It was profoundly disappointing that the heavily-politicized trial in Congo failed to deliver justice for the victims. We hope that this case will set a precedent and send a clear message to corporations that they cannot enjoy impunity if they take part in, or benefit from, violent crimes,” said Seema Joshi, legal advisor at London-based Global Witness.

“We must continue to fight against impunity. The victims’ families have never lost hope of seeing justice being done,” said Emmanuel Umpula Nkumba, executive director of ACIDH, a Congolese advocacy group that has been supporting the victims.

A U.N. report published in August cited the Anvil case as a prime example of how justice is often not done in the Congo. Less than two weeks ago, the House of Commons in Canada defeated legislation that would have created a mechanism for individuals to complain about actions of Canadian companies overseas.

“It has been a long hard road to justice and we are not there yet”, said Georges Kapiamba, vice president of the Congolese organization ASADHO and the main lawyer working with the families of the Kilwa victims and survivors in the Congo. “We sincerely hope the Canadian courts will give the victims the hearing they deserve.”

The claimants are represented by the Montreal law firm Trudel and Johnston, which specializes in class actions.

The claim represents assertions that have not yet been proven in court. Anvil will have the opportunity to respond in these proceedings.

1. Members of the Canadian Association against Impunity include Congolese citizens affected by the events which unfolded in Kilwa in October 2004. Representatives of the organizations RAID, ACIDH, Global Witness and CCIJ act as board members of this association.

2. Additional press materials include a timeline, backgrounder and document titled “Kilwa Trial: A Denial of Justice, A Chronology October 2004-July 2007,” which can be accessed at www.raid-uk.org/work/anvil_dikulushi.htm and www.globalwitness.org/media_library_detail.php/562/en/victims_of_kilwa_massacre.

3. A discussion event on the class action will be held in London, U.K., on Nov. 18, 2010. Please contact RAID or Global Witness for more details.

4. U.N. Office of the High Commissioner for Human Rights’ “Report of the Mapping Exercise documenting the most serious violations of human rights and international humanitarian law committed within the territory of the Democratic Republic of the Congo between March 1993 and June 2003,” August 2010, is available at http://friendsofthecongo.org/united-nations-report.html.

5. Another global study released in October found that Canadian mining companies were involved in more environmental, human rights and other abuses than companies from other countries. For more information on the global study, see “Corporate Social Responsibility: Movements and Footprints of Canadian Mining and Exploration Firms in the Developing World,” Canadian Centre for the Study of Resource Conflict, October 2009, accessible at http://www.miningwatch.ca/sites/miningwatch.ca/files/CSR_Movements_and_Footprints.pdf.

6. Anvil Mining admits having given “logistical support” in the form of the use of its chartered planes, vehicles and drivers to enable the military to gain access to Kilwa to quell a minor uprising that occurred in October 2004. In 2005 Anvil stated that it was compelled to provide this assistance. In June 2007 Anvil Mining’s employees and nine Congolese soldiers were found not guilty of war crimes or other crimes relating to the incident. The Congolese military court accepted Anvil Mining’s defense that it had acted in the framework of a requisition from the governor of Katanga.