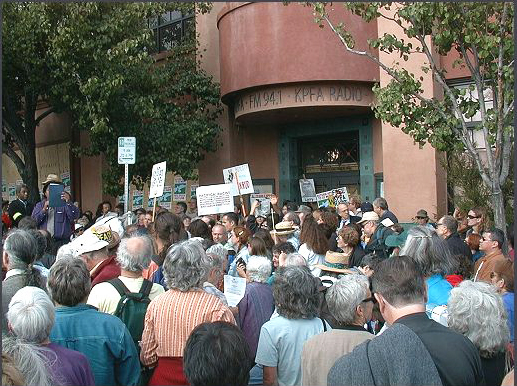 I’ve been getting phone calls and emails asking me what’s happening at KPFA. This is my best understanding of the situation after speaking with many participants and watching this situation develop over the past several years.

Brian was mainly talking about the poor financial condition of WBAI and KPFK back then – although KPFA had just had to hold its fall fund drive a month early because they were out of cash. But what he said then also applies as a very clear explanation of what is happening today at KPFA.

Just recently KPFA too exhausted its cash reserves and had to borrow money from Pacifica station KPFT in Houston to meet its Sept. 15 payroll. As with WBAI then, layoffs at KPFA are absolutely unavoidable at this point. You can listen to the recording of the meeting here:

05:00 – “We have spent, and budgeted, as if a one-time spike in listenership and listener support was long term growth, which it was not.”

“And you get pushed back, you get politicking, you get coalitions to block any kind of job cut, so the path of least resistance is to first spend down your savings, as long as you got money to pay the bills, and then go, ‘Oh my god, we’re headed over a cliff now,’ which is where we are now.”

11:25 – “So we’ve gotten ourself to a place where there’s not just a spending crisis, where we’re out of balance, but where there’s a cash crisis. There is not the money in our accounts that affords us the flexibility to take some of the steps we need to get the [Pacifica] Foundation back in balance.”

12:00 – “The income you have coming in, the revenues in that budget has to be proven. You have to be able to demonstrate that you’ve raised that kind of money by that kind of means in the past, or you can’t count on it.”

13:50 – “Stations without any cash in the bank, who are starting the year with zero, or as in the case with a couple of our stations, in the hole, negative money, have to budget a surplus …

“What I’m aiming at is not having the foundation go belly up in three months, because that’s what we’re heading for right now.”

20:55 – “What I dread even more is the day that everybody at the five stations [that comprise the Pacifica network] and Pacifica shows up to work to collect their paycheck for their last two weeks of work, and hears, ‘Sorry, we don’t have the money for you, our bank account’s empty.’ …

“And if we don’t make the cuts now, and honestly some of these cuts should have been made one or two years ago, that’s the real prospect we face, because we’re running out of cash.”

Why the Morning Show?

After a two-year delay in necessary layoffs and months of wrangling with the union this past year, the KPFA management’s proposal for layoffs was to cancel Flashpoints and Hard Knock Radio. Why did Pacifica management decide to cut the Morning Show staff instead?

After a two-year delay in necessary layoffs and months of wrangling with the union this past year, the KPFA management’s proposal for layoffs was to cancel Flashpoints and Hard Knock Radio.

There are two reasons: 1) Seniority – both the Flashpoints and Hard Knock staff have more seniority than the Morning Show staff, and 2) Uniqueness – Hard Knock is the only program on KPFA targeted towards young people of color, and Flashpoints is an award-winning investigative newsmagazine with a long-standing and passionately supportive audience particularly around their reporting and expertise on Palestine, Haiti, the U.S.-Mexico border and elsewhere. Flashpoints, in the afternoon drive time, is also the second biggest fundraiser at KPFA.

KPFA didn’t fall down when those personnel changes occurred. The program remained popular and a big fundraiser in the morning drive time.

This isn’t meant to disparage Brian or Aimee – or Andrea, Kris or Philip – but it is the reality of the morning drive-time program on KPFA. There are several other more senior staff members, and some combination of them could move into the Morning Show at least temporarily with very little if any change in its focus and popularity – Philip Maldari, Kris Welch, Davey D, Anita Johnson, CS Soong, Sasha Lilley, Dennis Bernstein – and probably some members of the unpaid staff who could also fill in for a while.

No particular person’s job is more important than the survival of KPFA.

Democracy Now could also temporarily move into an hour of that time and probably raise even more money than the Morning Show does. While money isn’t everything, of course, right now money is critical or KPFA won’t survive. And no particular person’s job is more important than the survival of KPFA.

You can help KPFA get through these hard times by doubling your contribution this year and asking everyone you know to do the same. You can also help by not getting caught up in the drama and destructive rhetorical battles.

This isn’t 1999. The Pacifica board of directors is now elected, not self-appointed. Pacifica’s new executive director, Arlene Englehardt, isn’t trying to corporatize or NPRize KPFA.

She is trying to save KPFA from its own previous uncontrolled spending and bad management that had been supported and protected by the staff who are now doing the most complaining against the new fiscal responsibility measures. She is trying to save the whole Pacifica Network – the only network of its kind in this country – that distributes essential programming to over 100 affiliated community stations across the country to counter these crazy political times, programs like Democracy Now, Free Speech Radio News, Letters to Washington, Flashpoints, Uprising and many other programs produced at the five Pacifica stations

Thanks for your support for KPFA and Pacifica. 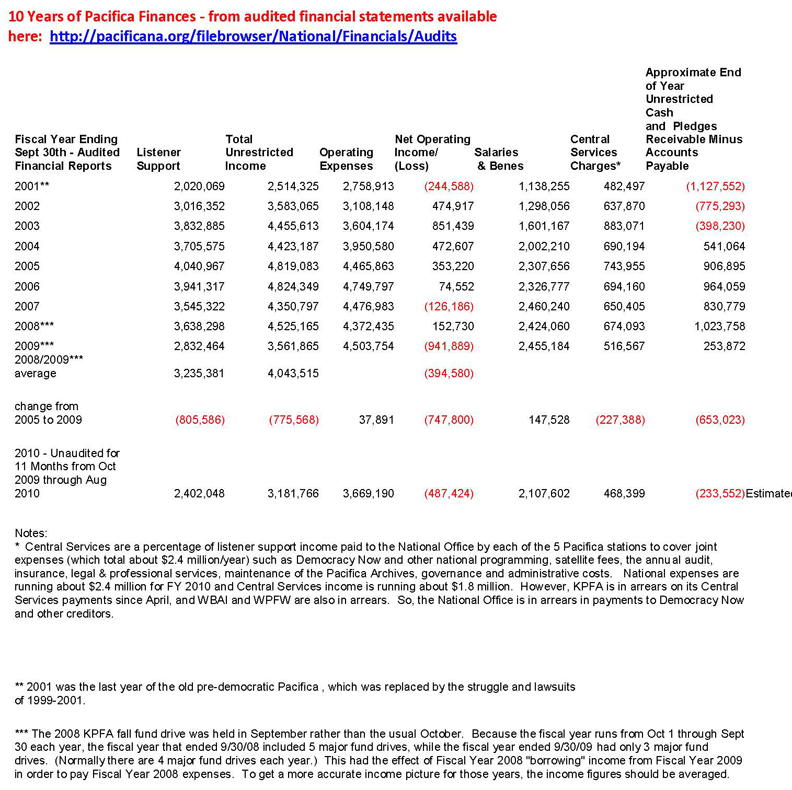 Carol Spooner was a KPFA Local Board member from 2000 to April 2005 and a Pacifica National Board member from January 2002 to January 2005. She was founder of the Committee to Remove the Pacifica Board and lead plaintiff in the “listeners’ lawsuit” from 1999 to December 2001. She can be reached at wildrose@pon.net. “Who is Carol Spooner and why are her views important?” wrote Marc Sapir, MD, MPH, on Sept. 9, 2009, on Indybay. “Carol is the lawyer who was the lead plaintiff and circulator of the petition representing the many thousands of KPFA listeners who signed onto the lawsuit that successfully brought KPFA and Pacifica back under listener control when, in 1999, the Pacifica National Board under then chair Mary Francis Berry, threw the KPFA staff out on the street, locked the doors and had the intention of selling off one or more of the five Pacifica stations and their assets. After the success of the listeners’ lawsuit, Carol was a long time member of the KPFA station board, polling first in most elections in which she competed, and was for several years a member of the Pacifica National Board. A few years ago she withdrew from KPFA activism to pursue her own career.” Carol is currently development director and a member of the board of Free Speech Radio News, heard weekdays on KPFA at 3:30 p.m.