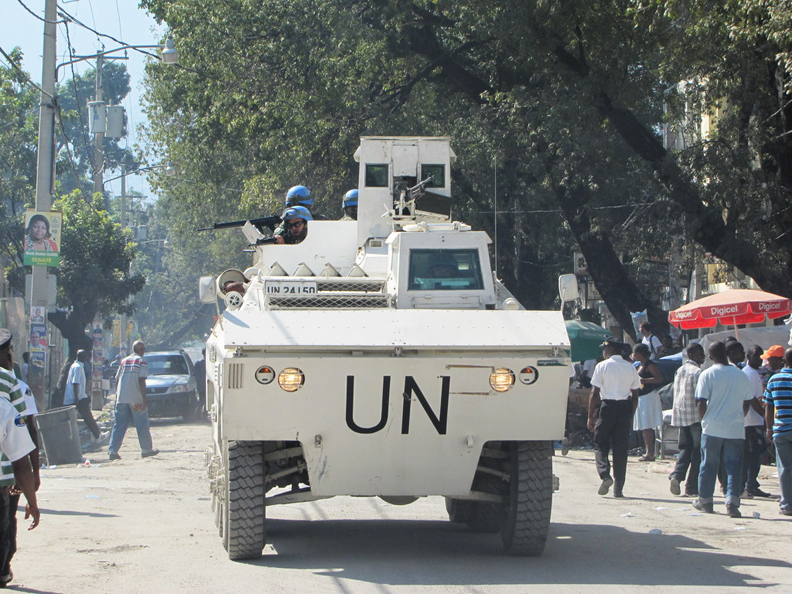 The U.N. has threatened to pull out of Haiti. Oh, what a blessed seasonal gift that would be. Bon voyage, U.N.! Goodbye. We’ll help you pack.

This is what Edmund Mulet of the U.N. had to say as reported by the London Telegraph in “U.N. threatens to pull out of Haiti”: “The U.N. and the international community will never accept that a legitimate Haitian president leaves under pressure from the street. It would be a coup,” he said. The hypocrisy of these double-faced, creepy vampires is beyond belief.

Open your ears, Mr. Edmond Mulet. The Haitian people on the streets demonstrating are asking for YOU, for the U.N. to go. Why do you only hear their call for President Preval to go and not for YOU to go? Take Clinton, the Interim Haiti Reconstruction Commission (IHRC) and the NGOs with you, please. Bon voyage, U.N. Goodbye, Clinton and 16,000 NGOs.

Haiti’s fragile indigenous people and environment, after nearly seven years of U.N. occupation, can no longer absorb all your feces. That’s a scientific fact! No pun intended.

The Nov. 28 elections in Haiti were a total fiasco, as could have been reasonably predicted by any sane person. But the level of fraud and disorganization was so outrageous, it surpassed all expectation. Some Haitians even say that given the circumstances – that is,

• 1 million of the roughly 4.7 million registered voters without ID cards;

• a partisan provisional electoral council handpicked by President Preval, loyal to Preval and his political party, instead of a permanent electoral council chosen by provincial governments, as required by law;

• over 1.5 million people homeless and most not knowing where their polling places are. 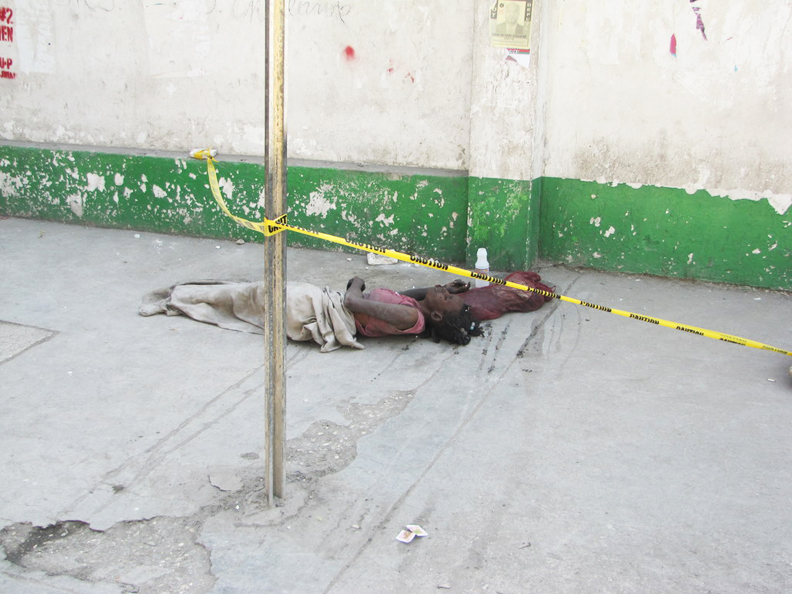 Given these circumstances, even without the open fraud on the day of the elections, the Haitian government and internationals who support their rule, appear to even have willfully orchestrated the disenfranchisement and disorganization through deliberate indifference to the integrity of elections in Haiti, negligence or incompetence.

By mid-day, 12 of the 19 presidential candidates had called for an outright cancellation of the elections. But the international community, including the U.S., Canada, France, OAS, U.N. and CARICOM – oh, how this CARICOM treachery cuts us! – has simply poured this dirty election water into our cups and insist we, the Haitian people, drink up these sham elections without regurgitating into the streets to demand free and fair elections. OR, they’ll ram it down our throats with their diplomatic maneuverings, joint declarations, guns, tear gas and threats of taking promises of reconstruction monies with them!

The morning after the sham elections, even before the vote counting for these foreign-imposed, non-inclusive elections had begun, Al Jazeera reports, the U.N. went to two of the more recognized presidential candidates and told each they were in the lead. Both Mirland Manigat and Michel Martelly stopped calling for the annulment of the U.N.-supported elections after that powerful, if blatantly contemptible foreign intervention. (See also “Signs of International Pressure to Accept Flawed Elections” at cepr.net.)

These foreigners’ threats, avarice and bullying upon a country knocked to its knees, in part by their anti-democratic malfeasance in 2004 and thereafter, continues to dismay normal and decent people worldwide.

Oh, what a seasonal gift it would be if the U.N. took their cholera butts out of Haiti, along with slick Willy Clinton and so-called “progressives,” like Paul Farmer!

These internationals support USAID/World Bank death plans, privatization, sweatshops for Haiti, false aid and false charity benevolence. Most have collected funds in the name of Haiti’s dying people and kept it in their coffers. Paul Farmer’s organization, for instance, Partners in Health, has only spent one third of the $86 million it raised after the earthquake disaster. Why? The Clinton and Bush Fund reportedly spent only $6 million in nearly a year out of the $60 million they’ve raised and say they will use the “emergency monies” they raised “in the future” for reconstruction that presumably they design, that they decide. All this, as the people die for lack of basic shelter, clean drinking water and sanitation!

So, Mulet, your priorities are not Haitian people’s priorities.

What, pray tell, has their false aid gotten Haiti in the long run? No water treatment or sanitation treatment plants, that’s for sure. Edmond Mulet of the U.N. says he believes in the CEP (Conseil Electoral Provisoire or Electoral Council) and President Preval. He believes they can turn these dirty elections into fair and free elections. What a hat trick that would be! 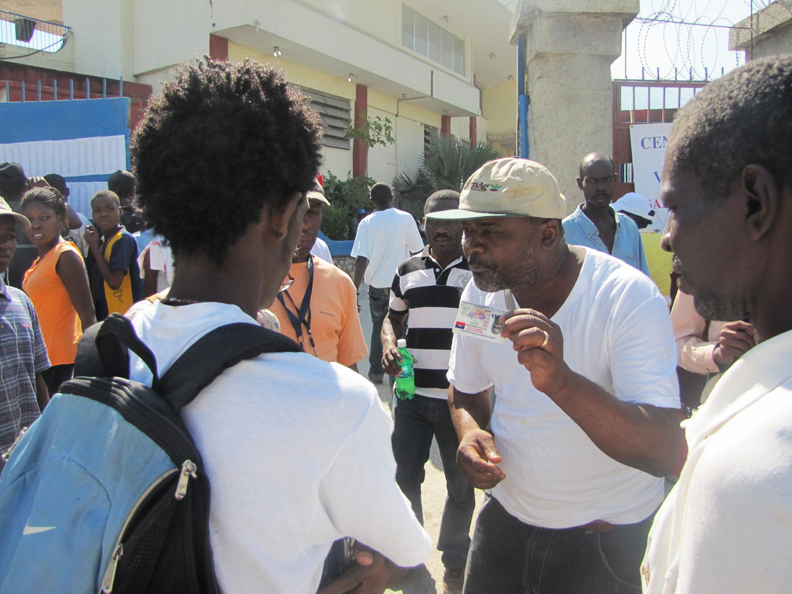 Someone tell Mulet, the people of Haiti don’t believe in such blan (white) magic! Go whitewash another country. And certainly Haiti’s people demonstrating on the streets right now have no reason to trust the current Haiti Electoral Council (CEP) and Preval’s expired government to look out for their democratic interests. Who does Preval and the CEP work for? The people of Haiti or Edmond Mulet?

No sane person really expected these sham elections to go OK. It was an exercise in futility from the beginning.

The right thing to do is to listen to the people and annul the farce, set up free, fair and inclusive elections. President Preval must finish his term in accordance with the law. But the initial 13 candidates who made the dignified stand for Haiti ought to get together and agree on some interim structure that can put forth free, fair and inclusive elections in 90 days, while also pushing forth water treatment plants to combat the cholera public health crisis.

The international community ought to support the Haitians who stood together on Nov. 28 and called for an annulment of the fraudulent elections. That’s the right thing to do.

Haitians don’t have a government in the Western sense and haven’t had one for a long time. The only ones really interested in the farce that’s called a Haiti government right now are the NGOs and international community who need a Haitian face to come to their incessant and futile meetings on Haiti. 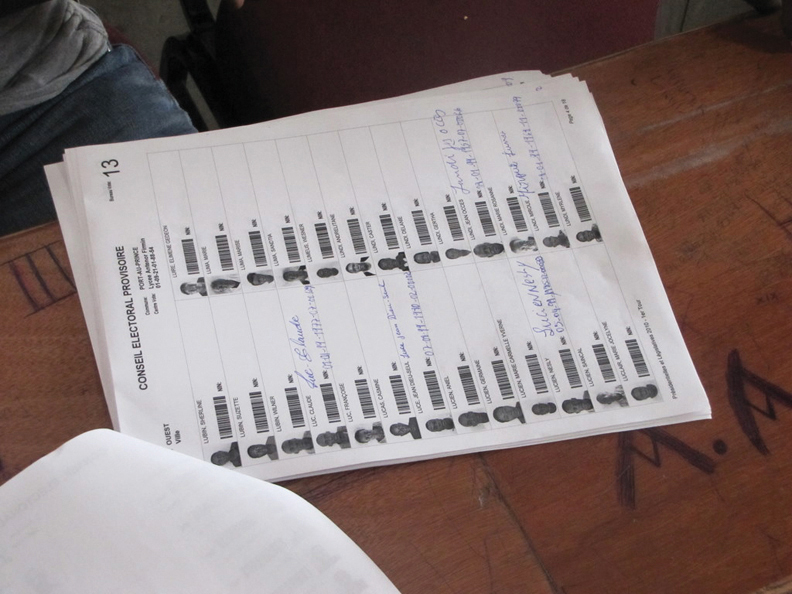 We write to let the world know Haitians did come together on Nov. 28 and said no to corruption and fraud. We write to let the world know that in that moment Haitians from different parties put their differences aside, put their personal interests aside. That moment ought to be magnified, supported and uplifted by the international community. It’s the decent, normal and right thing to do.

“If these farcical elections are not annulled, whoever wins will have no legitimacy and will depend on the U.N. and the U.S. to maintain their rule. That means the next president of Haiti will accept and legitimize the people’s brutal repression, as their rule is dependent on it.” – Ezili Dantò of HLLN 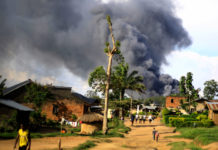 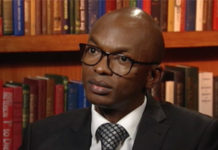