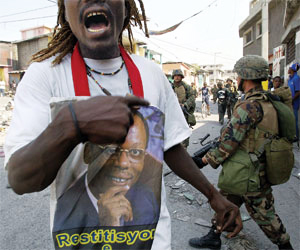 Haiti Action Committee is honored to post this full-page ad that appeared Sunday, Jan. 23, 2011, in the Miami Herald, echoing the call of Haiti’s democratic movement for the return of President Aristide.

Signed by hundreds of people, it demands that the United States, the United Nations and the Haitian government stop blocking President Aristide from returning to the land of his birth.

The text of the ad and a list of signers appear below.

In the aftermath of the terrible earthquake that shook Haiti on January 12th, 2010, calls for the return of former President Aristide have been growing louder. Last July 15, 10,000 people took to the streets in Port-au-Prince to commemorate President Aristide’s birthday and call for his return. A broad sector of Haitian grassroots organizations, women’s groups, human rights activists and educators have made it clear that now is the time to end President Aristide’s forced exile in South Africa. A petition circulating among Haitian women gathered well over 20,000 signatures within a few days, calling for the return.

President Aristide has publicly stated that he wishes to return home to Haiti to participate in Haiti’s recovery. President Aristide’s support among Haiti’s poor, who elected him twice as president, and who represent the vast majority of the Haitian population and are those most affected by the recent devastating earthquake, remains strong. There are no legal obstacles to his return; in fact Article 41 of Haiti’s Constitution, declares that “no individual of Haitian nationality can be deported or forced to leave the country for any reason whatsoever,” and Article 41-1 states that “no Haitian needs a visa to leave the country or to return to it.”

Nevertheless, President Aristide remains in exile because the Haitian government, the United States, France, Canada, and the United Nations forces in Haiti have blocked his return. The Haitian government has not responded to President Aristide’s request for the issuance of a passport. U.S. and UN officials have issued public statements opposing his return.

But they do not speak for the people of Haiti. As demonstrations for President Aristide’s return continue in Haiti, as broad sectors of Haitian society echo this call, as the voices of those living in refugee camps across the devastated city of Port-au-Prince and throughout Haiti reach us, we reiterate and support their demand. 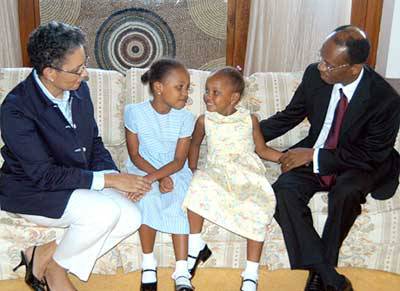 We call on the Haitian government to immediately renew President Aristide’s passport as he has requested, and to facilitate his return, without any conditions, to the country of his birth. We call on the international authorities, particularly the United Nations and the United States government, to end their opposition to President Aristide’s return. Justice, humanity and respect for self-determination are at the heart of this issue. All hands are needed in Haiti at this difficult moment.

Institutional affiliations are listed for identification purposes only. This full page ad, which appeared in the Miami Herald Jan. 23, 2011, was paid for by Haiti Action Committee, P.O. Box 2040, Berkeley, CA 94702, www.haitisolidarity.net.