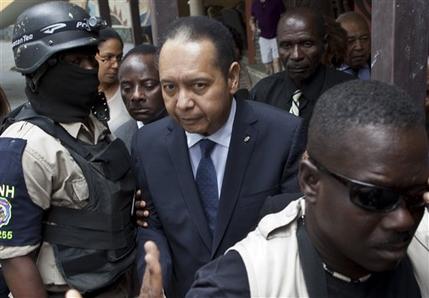 The plot to control Haiti has gone from the absurd to the ridiculous. The return of Jean Claude “Baby Doc” Duvalier to Haiti in the midst of a flawed election is truly shocking. The Duvalier dictatorship was absolutely brutal, and there is extensive documentation of the human rights violations suffered by the Haitian people during his reign. I was pleased to hear that the authorities had taken him into custody, and I urge that he be tried for his crimes. Nevertheless, Duvalier’s return raises serious questions about who in Haiti facilitated his return and what his supporters expect to gain by bringing him back.

Duvalier’s return comes in the midst of a desperate attempt by President Rene Préval to maintain control of Haiti by ensuring the election of Jude Celestin, his chosen successor. President Préval did this by appointing a Provisional Electoral Council (CEP) that was biased in his favor, which refused to allow candidates from over a dozen political parties to participate in the elections. Among those excluded was Lavalas, Haiti’s largest political party and the party most popular among Haiti’s poor. The result was a deeply flawed election that generated widespread and sometimes violent protests among the Haitian people.

Had the elections truly been inclusive, the most likely result would have been the election of a president who represented the impoverished majority of the Haitian people. This would have been contrary to the interests of the rich and powerful business elites of Haiti, whose main goal has always been the exploitation of the Haitian people as cheap labor. It is these wealthy Haitian elites who benefited under the reign of the Duvalier regime and who would no doubt benefit if he were to return to power.

Additional confusion was created by the Organization of American States (OAS), which attempted to salvage these flawed elections by issuing a report based on flawed methodology. The OAS did not conduct a full recount, but instead examined a sample of only 919 of the 11,181 tally sheets from voting booths across Haiti, threw out 234 of these tally sheets, and then concluded that Michel “Sweet Micky” Martelly should advance to a runoff, along with Mirlande Manigat, in place of Jude Celestin. The OAS report concluded that Martelly defeated Celestin by a margin of only 0.3 percent of the votes reported on those tally sheets that the OAS chose to count. This would mean Préval’s candidate, the candidate who is most likely to be trusted by the elites, would be eliminated.

However, according to an analysis by the Center for Economic and Policy Research (CEPR), tally sheets were either missing or were discounted for irregularities at 1,326 voting booths or 11.9 percent of the total. The proportion of discounted votes and other irregularities is more than sufficient to cast doubt upon the entire process, especially when the difference between the number of votes counted for Celestin and Martelly is so small. The recommendation of the OAS to change the names of the candidates included in the runoff election is an ill-advised and sloppy attempt to fix an election that should be scrapped entirely.

In any case, it is now clear that no runoff can be held this month as previously planned, and no successor will be elected prior to Feb. 7, the last day of President Préval’s term in office under the constitution. Consequently, there is the possibility that Haiti could find itself with no president, thus creating a void and the opportunity for a dictator.

The recommendation of the OAS to change the names of the candidates included in the runoff election is an ill-advised and sloppy attempt to fix an election that should be scrapped entirely.

It is absurd and outrageous that anyone would even think to take advantage of this situation to facilitate Baby Doc Duvalier’s return to Haiti. Unfortunately, he has returned, and it is important to ask why. Who assisted Duvalier in his return? Where did he get the money to pay for his return? Were any officials of the U.S. government aware of his plans to return? Was the Central Intelligence Agency (CIA) aware? If so, was any action taken to stop him from returning or to ensure that he would be arrested and prosecuted for his crimes and not allowed to usurp power if he did return? 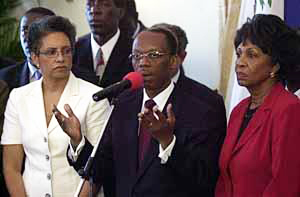 I am deeply concerned that the wealthy elites of Haiti who supported the Duvalier regime in the past, along with the assistance of international agencies, may have encouraged Duvalier to return in the hope that the flawed elections will create a power vacuum that could allow him to take power once again. I am even more concerned that OAS officials may be wittingly or unwittingly helping to create precisely the type of power vacuum that would enable him to do so.

The U.S. government promised to help Haiti recover from last year’s earthquake and develop its economy. I introduced legislation to forgive Haiti its foreign debt and allow the country to secure additional aid in the form of grants so that it wouldn’t incur further debt. I was very pleased that Congress passed the legislation in a bipartisan manner and that President Obama signed it into law just three months after the earthquake.

Haiti’s next government will be called upon to make difficult decisions regarding the allocation of these resources. If these decisions are not made by a credible and legitimately elected government, billions in U.S. taxpayer funds could be wasted and many donors may refuse to distribute the funds that were promised. Meanwhile, Haiti’s recovery could be delayed for decades and the Haitian people will continue to suffer.

I believe the only recourse is for Haiti to organize new elections that will be free and fair, inclusive of all eligible political parties and candidates, and open to participation by all Haitian voters. The U.S. government should demand a clear statement to that effect by both the OAS and President Préval, and the U.S. should stand ready to assist Haiti in organizing new elections.

Only through free, fair and inclusive elections will the people of Haiti be empowered to create a better future for themselves and their children.

• Jean Claude Duvalier returns to Haiti but former President Aristide, the most respected trusted voice of the poor within Haiti, lives in forced exile unable to obtain a visa to return? Sign the petition demanding the return of President Jean Bertrand Aristide to Haiti: http://www.petitiononline.com/haitiwom/petition-sign.html

Haitians who lived through the Duvalier era carry the terrible memories with them today. Duvalier’ s return sends them a chilling message – that in today’ s Haiti, Duvalierism is alive and will be tolerated as part of the political landscape.

It took a determined popular movement to oust Duvalier. It was this movement – representing the vast majority of Haitians – that swept President Jean Bertrand Aristide to an overwhelming electoral victory in 1990. And it is this movement that is demanding his return today.

Ousted in a U.S.-orchestrated coup in 2004, President Aristide remains the most respected and trusted voice of the poor within Haiti. Perhaps that is why the current Haitian government, the U.S. State Department and the United Nations – the same authorities that allowed the return of Duvalier – continue to block President Aristide’ s return.

A 2005 WikiLeaks cable documents the U.S. government “insistence that all efforts must be made to keep Aristide from returning to Haiti or influencing the political process.”

They are standing on the wrong side of history. It is time for President Aristide to return and time for Jean Claude Duvalier to be held accountable for his crimes against the Haitian people.