“Haiti: Harvest of Hope” is an exceptional must-watch film which documents the rise of the Lavalas movement and the coming of democracy to Haiti in December 1990. The film traces Haitian history from the U.S. occupation – 1915-1934 – through the brutal regimes of Francois and Jean Claude Duvalier, Papa Doc and Baby Doc, the latter fleeing in 1986. This was followed by a series of brutal leaders until finally the election of President Aristide in 1990.

Aristide’s own presidency is disrupted by a coup in 1991 by Gen. Raoul Cedras, an officer in Duvalier regimes later found to be on the CIA payroll, following which thousands of Lavalas supporters were murdered, some even while sleeping. Aristide returns in 1994, which is where the film ends.

What is interesting about the film in the context of the return of Jean Claude Duvalier last Sunday, is that in the 1990 elections, the Duvalierists and Macoutes hoped to use the chaos and insecurity in the country as an opportunity to return to power, this time through the ballot box. Fortunately their plan fails, as one hopes this new plan by Duvalierists to return will also fail. 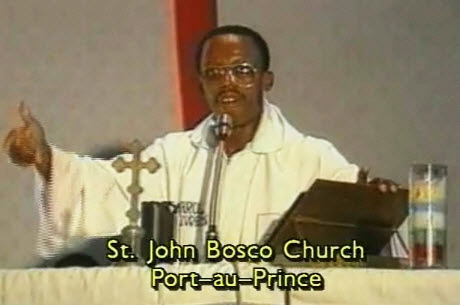 One note, given Rene Preval’s betrayal of Aristide’s vision and his aloofness towards the Haitian people to the point where he is despised by the majority, it is strange seeing him speak favorably about the movement and Aristide presidency.

The film is dedicated to the mothers who sacrificed so much to bring democracy during this period. Below is a trailer, but the full film can be watched online on the HIP website.

Sokari Ekine, Nigerian blogger, activist, educator and mentor who has spent considerable time in Haiti recently, can be reached at Sokari@blacklooks.org and www.blacklooks.org/, where this story first appeared. Another documentary by filmmaker Kevin Pina, longtime Haiti activist often heard on KPFA’s Flashpoints, is “Haiti: We Must Kill the Bandits,” described Jan. 17 in Global Policy in Brief.

Will the CIA obey a Trump order to stop funding terrorists?