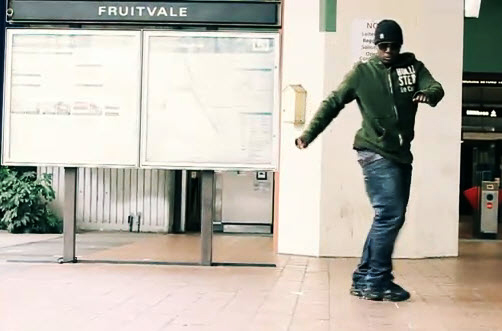 “Oscar Grant’s death was a tragedy that affected a lot of people in Oakland, especially youth,” said Kash Gaines, the co-founder of Yak Films who filmed the video. “The video is meant to be a message to everyone in Oakland about the injustices here and how we use artistic expression to deal with it. We’re not providing solutions; we’re just recognizing what happened and providing youth with an outlet.”

Yak Films and Turf Feinz reached international prominence in 2010 with the viral popularity of another memorial video, for a young man who was killed in a car accident on an East Oakland corner. The video, “‪TURF FEINZ “RIP Rich D” | YAK FILMS | DANCING in the RAIN‬” has received more than 2 million views on YouTube.

“Two dancers in this new video had been bringing up that we’ve made R.I.P. videos for the deaths of close friends, but there’s bigger incidents that affect us,” Gaines said. “A lot of people in Oakland need healing. Our dance crew, Turf Feinz, always promote dance as a peaceful expression. We’re showing this is how we deal with the situation.”

Gaines and Yoram Savion, co-founder and director of Yak Films, began creating dance films with the Turf Feinz while at Youth Uprising, an Oakland-based youth leadership program frequented by the young adults in the dance crew.

Youth UpRising, where Gaines is a photography teacher and multimedia producer, grew out of the needs articulated by Oakland youth in 1997 after racial tension at Castlemont High School erupted into violence. The young people identified problems including poor educational resources, few employment opportunities, the absence of positive things to do, and lack of community and personal safety.

During the turmoil surrounding the trial and sentencing of BART Police Officer Johannes Mehserle, Youth UpRising promoted messages of peace and unity.

The release of this memorial dance video is a reminder of the fragility of young lives in Oakland, Calif. – and an artistic celebration of the beauty of youth expression and possibility.

Yak Films began as a production team of young photographers and filmmakers dedicated to youth-led multimedia production. Its work with urban dance began with the legendary Turf Feinz crew. Yak is now a leader in the street-based documentation of the global dance movement. Turf Feinz is a group of young men from Oakland who “turf dance,” a form of movement born in Oakland that stands for “taking up room on the floor.” They have received more than 2 million views for their “RIP Rich D” video made by Yak Films.