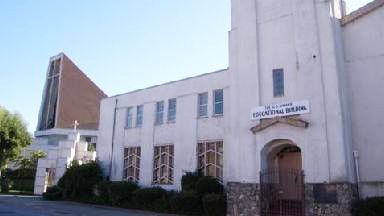 Construction is not rocket science. Slaves, who could not read, constructed mansions that are now hundreds of years old. Large white contractors and large unions have sold us on the idea that only White people can construct large projects.

Prevailing wages for construction workers average more than $40 per hour. Even laborers get $25 per hour. The labor income generated by the Beth Eden Baptist Church expansion project will be in excess of $6 million. How much of that will reach Black pockets?

Slavery and the years of oppression that followed have put some funny notions into our heads. We somehow feel superior when we can contract with or buy the services that we need from a White person. It somehow gives us bragging rights.

Beth Eden is in the heart of West Oakland. A few blocks away is a public housing project, where the Black unemployment rate is at least 50 percent – where young Black gangs are shooting each other to protect their turf. Our community response is to get the police rather than give them some work. Black contractors hire Black workers.

Black churches get Black newspapers for free. The people who read these papers feel entitled to get them for free. The Tribune and the Chronicle both charge a large subscription fee for their papers. Almost nothing in these papers is related to the things that touch the lives of descendents of former slaves.

Last week I dumped on Beth Eden for contracting with a large White contractor to build a structure for their church. I do not know who the architect is. I fear it is a White person. Like the city of San Francisco, when they decided to build a small library in Hunters Point, they contracted with a White firm from Oregon. The Bay Area Black Builders shut the project down when this White architect from Oregon started to lead the pre-bid conference. If this library had been built in Chinatown, would the city have contracted with a White architect? Have any of my readers ever seen a Black person working in a Chinese restaurant?

How do we as a Black community build capacity in our own people? How do we learn to circulate our money in our own community? It is not just Beth Eden; it is all of us.

If we cannot persuade our churches that we support with our money to help our children find training and work, how can we expect our city to do so? We do not support our Black newspapers. We elect people who have more loyalty to unions than they do to our community and our problems.

I don’t have a dog in this hunt. I despair. Readers tell me to keep on writing, but why? I have taken care of my children and my grandchildren; I have spent my life trying to make this a more just place.

I anger those in power. They run away from me. I was run out of San Francisco, because I suggested on TV that our young men should protect their construction turf like they protect their drug turf.

Not only am I not supported in my efforts, but also the Black press that is kind enough to allow me this space for my expressions is not supported. Nothing changes. The problems are the same now as they were 40 years ago.

We must help ourselves.