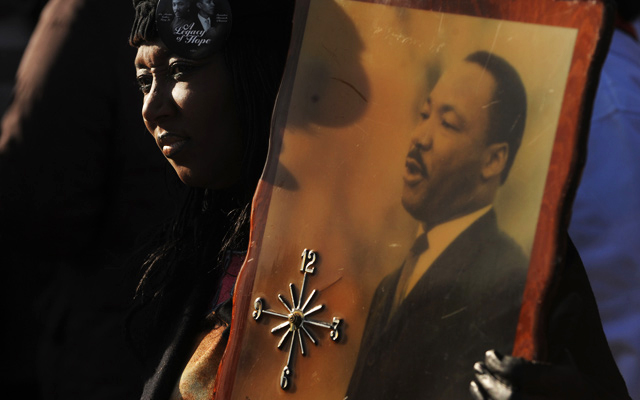 It’s been a rough year for Martin Luther King Jr. and for his legacy.

First, as has become an annual ritual, politicians went to church or some other civic gathering for last year’s King Day celebration, even as they continued to support public policies that he found abhorrent. Whether continuing to prosecute a seemingly endless and most definitely murderous war or supporting cuts to vital social programs, they demonstrate no shortage of hypocrisy when it comes to proclaiming fealty to King’s vision in words, while besmirching it in deeds, all at once.

Then of course came the venal cooptation of King’s crowning public moment – the 1963 March on Washington – by Glenn Beck this past August. Insisting that it was time to “reclaim the civil rights movement” because conservatives were the ones who “did it in the first place” – an inversion of history so grotesque as to confound the imagination – Beck inspired a gathering of tens of thousands of disaffected (mostly white) reactionaries, likely none of whom had been involved with the civil rights movement, but who now would be encouraged to see themselves as the inheritors of King’s “dream.”

This, even as they clamored for more tax cuts for wealthy folks and the repeal of health care reform, all at the behest of a guy who once said he would like to kill Rep. Charlie Rangel with a shovel. I will leave it to others far more creative than myself to determine how one might square any of that with the teachings or beliefs of Dr. King. Then again, given the recent statement by a Defense Department spokesperson who asserted that King would have supported the wars in Afghanistan and Iraq, anything is possible.

And this is especially true in a nation that has thoroughly sanitized and compartmentalized King’s message, and King himself, within the pantheon of national heroes. We have turned King into a milquetoast moderate whose agenda went little beyond the ability to sit next to white people on a bus. We’ve stripped away from the public remembrance of this man his calls for income redistribution, his insistence that the United States has become the “greatest purveyor of violence in the world today” and his proclamation that poverty, racism and militarism are the “triple evils” that America’s rulers have not the courage to confront.

When conservatives can effectively twist King’s singular line about judging people on the “content of their character” rather than the color of their skin into a reason to oppose affirmative action, even though he openly supported such efforts in his writings and interviews in 1961, 1963, 1965 and again in 1967, it ought not surprise us that folks are a bit confused about who King was and about the principles for which he stood.

The way in which we have forgotten or been misled about King’s legacy is never more apparent than when asking children what they know about his message. Sadly, when I have done so, the most typical answer given is that King stood for not “hitting people” or “not hitting back if they hit you first” or that his message would be, were he alive today, “don’t join a gang.” While all these things are true, I suppose, they rather miss the point.

After all, King’s commitment to non-violence had a purpose larger than non-violence itself. Non-violence was, for King and the movement, a means to a larger end of social, political and economic justice. Non-violence was a tactic meant to topple racism and economic exploitation and lead the world away from cataclysmic warfare. That so many young people seem not to get that part, because teachers are apparently loathe to give it to them, renders King’s non-violent message no more particularly important than the banal parental reminder that we should “use our words” to resolve conflicts, rather than our fists. Thanks, but if that message were all it took to get a national holiday named for you, my mother would have had her own years ago.

Non-violence was a tactic meant to topple racism and economic exploitation and lead the world away from cataclysmic warfare.

Were this tendency to render King divisible on multiple levels – abstracting non-violence from justice, colorblindness from racial equity, and public service from radical social transformation – merely an academic matter, it would hardly merit our concern. But its impact is greater than that. Our only hope as a society is to see the connections between the issues King was addressing and our current predicament, to see that what affects part of the whole affects the greater body, to understand that racism and racial inequity must be of concern to us all, because they pose risks to us all.

For instance, were it not for the indifference to Black and Brown suffering that animated much of the early non-response to the subprime mortgage crisis – which manifested initially in the mid ‘90s, but received little attention and even less government action – perhaps steps would have been taken to prevent what has become, now, a full-blown housing collapse. But rather than seeing the exploitation of low income folks of color as a national emergency, most politicians and media ignored it or blamed the victims of predatory lending for being too stupid to read the fine print on their loan documents.

As such, the lenders branched out, unregulated for the most part, into whiter and middle-class communities, where they took advantage of folks there too. Now, millions of middle class white folks find themselves on the verge of economic catastrophe, precisely because the suffering of the other was ignored for so long and, eventually, as suffering is wont to do, metastasized.

Likewise, if double-digit unemployment had been viewed as the emergency it is, when only people of color were experiencing it – as they typically have been, in good times or bad, year after year throughout this century – perhaps lawmakers might have seen fit to address the problem. But it wasn’t, and so they didn’t. And now whites are experiencing double-digit joblessness as well, for the first time in over three generations.

And if we had not long ago racialized the “have-nots” as undeserving people of color, thereby allowing racial bias to block government actions that might have been taken on their behalf – like universal health care or massive investment in job creation – perhaps we would not today have tens of millions of people, including millions of white folks, lacking access to medical treatment or job security. But we did, and so we do. And now we can witness white folks running around, speaking against health care reforms from which they would personally gain, all because of a fear that some of the benefits might go to “undeserving” immigrants of color, or lazy folks – typically perceived as Black and Brown – who don’t want to pay for their own care.

In short, by not understanding the fundamental truth of King’s message that an injustice anywhere is a threat to justice everywhere, we have created a society, 43 years since his death, where injustice and suffering are rampant. And one in which the dreams of the civil rights movement appear the fantastical products of some Ambien-induced haze.

Only by putting away, forever, the safe and sanitized version of this man and his compatriots, might we ever awaken from the stupor and become worthy of that which we celebrate this week.

Tim Wise is the author of five books on racism, including his latest, “Colorblind: The Rise of Post-Racial Politics and the Retreat from Racial Equity” (San Francisco: City Lights, 2010). Contact him at timwise@timwise.org and visit his website at www.timwise.org. This story first appeared on ColorLines.