San Francisco – After an iphone video shot by a passerby appeared on YouTube, SFPD officers retracted a report that they fired on a standing man armed with a buck knife.

The six minute 12 second Jan. 4, 2011, video revealed four San Francisco plain clothes and one uniformed officer surrounding and pointing guns at wheelchair-bound Randal Phillip Dunklin, 55. A startled voice on a San Francisco Examiner embedded video the Police Department released said: “This motherfucker’s got a gun! Four undercovers all gunned out. Ain’t got no witness. Let’s send this shit to Channel 7.” 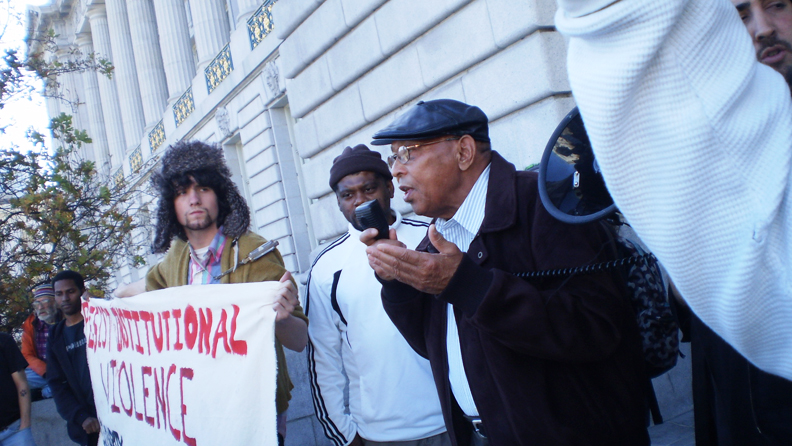 The white-haired Dunklin turned his wheelchair trying to flee. Danielle Harris, Dunklin’s attorney, insisted, “You asked me why he was so upset, and at the point that you’re looking at he’s got multiple police officers pointing guns at him, having already pepper sprayed him in the face.

“The purpose of pepper spraying someone in the face,” she emphasized, “is to make it so that they’re disabled. They achieved that … temporarily putting him in a situation where he couldn’t really see, and he was in a lot of pain.”

Seconds later as shots rang out striking Dunklin in the groin, his arms flew up releasing an object into the air. Three more armed uniforms sprinted toward the group as a police siren shrilled to a stop. Dunklin appeared to lie out of sight screaming on the sidewalk behind a seated dark-haired man receiving first aid.

Sources say Randy, as he is known, wheeled from Potrero Avenue to the Behavioral Health Services Center at 1380 Howard and 10th, waiting in his chair in the early morning cold, then entering the building. Harris told me, “He was there seeking treatment. He was told to return the following day.”

His blinded eyes stinging from pepper spray, he apparently achieved a Rambo-style lunge toward the unnamed officer slicing a wound requiring 21 stitches. The video shows he did not rise from his chair. His attorney attested, “He is in a wheelchair by necessity.” His friend verified he cannot stand on his one good leg or scoop and throw concrete blocks. He uses his small folding pocket knife to slice fruit and meat.

In a San Francisco Superior Court hearing, Dunklin pled not guilty to two counts of assault with a deadly weapon, resisting police and vandalism. The first charge appears to be the SFPD shoulder stab; the second represents the prosecutor’s claim he threw the knife at the officer. Defense states he threw it “away.”

On Tuesday, Jan. 25, I spoke with Randal’s long-time Potrero camping buddy, “Cowboy,” who worries about his friend. He suspected incorrect newspaper “facts” and has not viewed the video. Cowboy was adamant that Randal isn’t the kind of guy to lash out at anyone with a knife. He’s a “nice” quiet person, social with a few friends, intelligent, reads a lot.

Lately he seemed frustrated by the discomfort of being on the street with two disabilities, one keeping him wheelchair-bound. Though the SFPD requires that Cowboy and Randy shift belongings from place to place, neither will stay in roach and bedbug-infested SROs. Randy has repeatedly sought, and been turned away from, treatment at San Francisco General. Cowboy never noticed him hearing voices or disassociating.

On Saturday, Jan. 22, 2011, a woman driver chased by police smashed into a Daly City home. As she backed her vehicle striking an officer, police shot and critically injured her.

Shocked by the shootings, community organizers, on Martin Luther King Day, Monday, Jan. 17, galvanized a community of outraged San Franciscans and Bay Area activists to protest SFPD’s excessive force. Jeremy Miller of Education Not Incarceration told me that, consistent with the rally’s purpose, Dr. King in his “I Have a Dream” speech condemned “the unspeakable horrors of police brutality.”

The march proceeded north from the corner where the Dunklin shooting occurred outside the Department of Public Health Behavioral Health Services Building down 10th Street to City Hall.

On the steps of City Hall, Jeremy and Mesha Monge-Irizarry shared the MC role introducing rally speakers. Advocates for victims, many of whom had personally experienced police assault and false imprisonment, spoke, cheered and performed poetry.

“We’re looking at a vote of no confidence in the current composition of the Police Commission and the Office of Citizen Complaints,” stated Jeremy. Bureaucratic blockage at every level offers scant redress for police assaults upon the mentally ill and innocents on streets and in jails.

At the rally, a collective intake of breath accompanied Sala Haqueeyah’s description of her torture at 850 Bryant – face bashed into a wall, chipped tooth, sleeping on a floor with half a blanket, worried about her infant child at home. Humiliated by a cavity search, her false arrest resulted in no charges.

The rally represented “the launching of a citywide task force,” stated Mesha. In a Jan. 14, 2010, Facebook posting, she announced: “There is a coalition starting to form about police misconduct and mental health issues, involving [Eduardo] Vega, the new director of the Mental Health Association, possibly the Public Defender’s Office and the Coalition on Homelessness … Idriss Stelley Foundation, Education Not Incarceration and open to other grassroots organizations.”

Speaker Michael Gause, associate director of San Francisco Mental Health Association said MHA has “formed a partnership with the Public Defender’s Office, the Coalition on Homelessness, Caduceus Justice and the Mental Health Board and other stakeholders.”

Gause called for “concrete solutions to aggression against mental health consumers by the Police Department.” He said mental illness and health issues affect almost 25 percent of Americans. SFPD’s excessive force could be perpetrated on anyone.

He wanted “a real dialogue about crisis intervention,” insisting all officers should undergo training. “Until July of 2010, SFPD had 40-hour police crisis intervention training. Only four people … were shot in the 10 years that that was in place. Since July, three mental health consumers have already been shot.” The program should be immediately refunded. 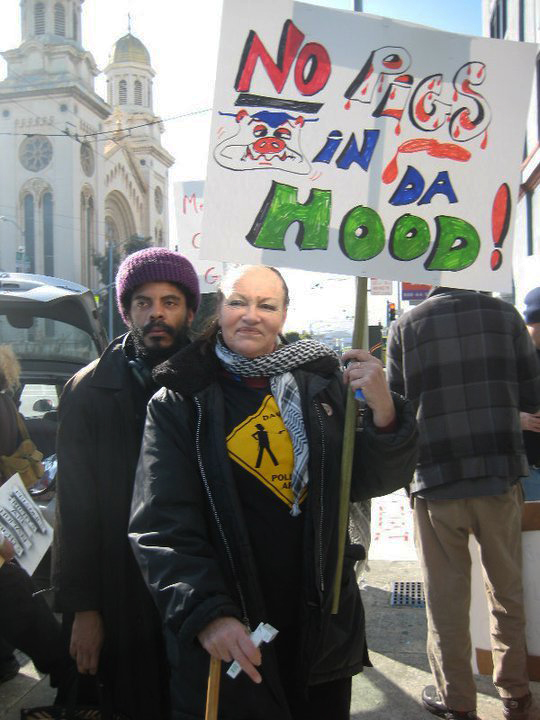 “When you call Mobile Crisis, which has been cut to the bone, they say, ‘Call the police.’” Mobile Crisis, not police, should respond first to mental health situations.”

Finally, he called for “real cultural change within the Police Department.”

At their June 2010 National Policy Summit, IACP, the International Association of Chiefs of Police, offered protocols for police departments nationwide:

• People with psychotic symptoms want to be left alone. They yell because they are frightened of people persecuting them. Intervention by force is the worst case scenario. Crisis intervention officers or teams lift the burden of messy, unpredictable interventions that steal time from a cop’s busy day.

• Mandatory CIT training forced on every officer undermines the dedication of mental health professionals cooperating together in a culture of compassion and acceptance that can permeate law enforcement systems.

Helynna Brooke, former director of the San Francisco Mental Health Board, recalled 10 years ago that Marykate O’Connor, Jennifer Friedenbach and others started a police crisis intervention training collaboration between the Mental Health and Police Departments. Veteran San Francisco police officers said it was the most valuable training they had.

“We must provide this training for our officers,” she urged.

Helynna outlined effective techniques for dealing with people in psychiatric crises. Keep a good distance. Notice cues: Are they looking left or right, unaware of the officer? Ask if they’re hearing voices and what the voices are saying. Lower your tone to trigger the human reaction to speak quietly, stop body movement and pay attention. 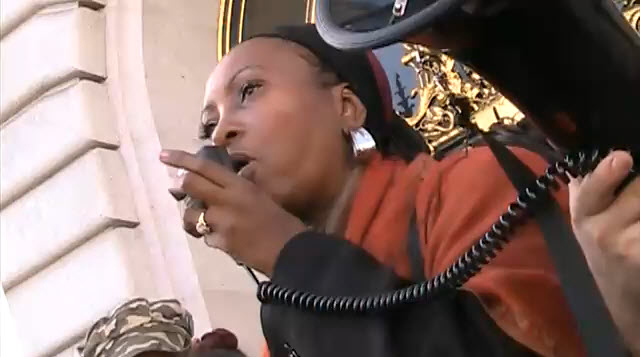 The uphill battle to redress what Jeremy calls a “diseased police bureaucracy” is aggravated by the outgoing mayor’s appointment of SFPD Chief Gascon to the district attorney position after he terminated crisis intervention training and gave thumbs up to his officers’ shooting of Randal Dunklin. Of the absurdity of Gascon’s office both investigating and prosecuting the Dunklin case, Coalition on Homelessness organizer Bob Offer-Westort noted dryly that it’s “Gascon investigating himself.”

Danielle Harris told me, “I am researching a motion for the District Attorney’s Office to recuse itself.”

During his time as police chief, Gascon never attended the funerals of SFPD officers who committed suicide, noted Mesha, adding, “That shows his commitment to mental health issues.”

Carol Harvey is a San Francisco writer whose work is published by many Bay Area periodicals. Email her at carolharveysf@yahoo.com. To learn more and get involved, contact Jeremy Miller of Education Not Incarceration at (415) 595-2894 or djasik87.9@gmail.com.