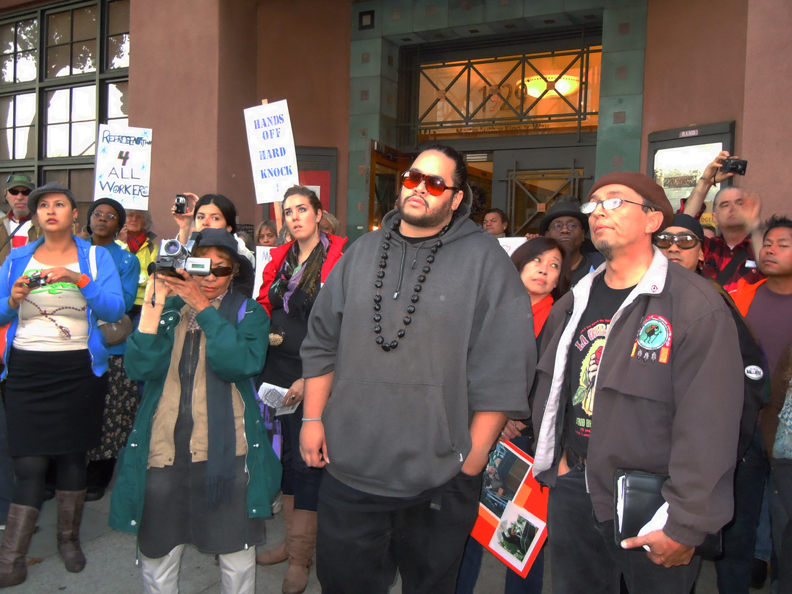 Friday was the fifth day of KPFA’s annual major winter fund drive. In a previous article, I wrote with great concern for the future – the financial viability – of the station and the Pacifica Network of which it is a part. My concern has not lessened as both the network and KPFA remain close to insolvency, and so the outcome of this present fund drive is particularly important, although a mini-fund drive in December was a great success bringing in 150 percent of projections.

In the interim, the governments of Tunisia and Egypt have fallen and massive non-violent uprisings are occurring throughout North Africa and the Arabian peninsula, all this widely covered daily on KPFA, which recently became the only national network carrying Al Jazeera-English. In addition, the staff of the program Voices of the Middle East and North Africa put together extended shows that aired in prime time with fantastic commentary from experts and activists rarely heard anywhere in U.S. media.

At the same time Amy Goodman’s senior producer, Sharif Abdel Kouddous, an Egyptian-American, traveled to Egypt where he was on the scene daily reporting from Tahrir Square as well. Through the good sense of Pacifica Executive Director Arlene Engelhardt, Goodman’s show, Democracy Now – KPFA’s most listened to program – is now running in the 7 a.m. drive time slot, complemented by a diverse and local Morning Mix show at 8-9 a.m., which has also brought to KPFA airwaves many new voices and perspectives.

Meanwhile, the organized effort by a group of paid staff and their supporters to weaken KPFA’s and Pacifica’s leadership has not abated, and their inflammatory approach could diminish income from the just begun fund drive. Attacks on Pacifica Executive Director Arlene Englehardt and efforts to undermine the changes she has made, which have strong support among unpaid staff and listeners, continue.

Some of those responsible for the incessant cacophony continue to post absurdly distorted visions of the Pacifica world on two web sites using the KPFA name – an illegal use of the name – continue their “informal” boycott of the Morning Mix programming and continue the baseless claim that Pacifica has been both taking “KPFA’s money” and is guilty of profligate spending.

For one thing, KPFA is not and never was an independent entity. It was the founding station of the Pacifica Foundation, and Pacifica is a collaborative network whose national board is selected from the local station boards.

The facts are terrifyingly clear that the network is in financial trouble with both reduced income and listenership. And all the stations need to redouble their efforts to re-expand their audiences with engaging and creative programming to gain new listener sources of revenue for this important font of independent journalism and left-populist political advocacy to thrive.

I continue to believe that the Morning Mix at 8 a.m. deserves all the financial support that people can give, yet I ask all reading this letter to give generously to support the station at any time of the day or night and in any way you can or choose to do so. The easiest way is to go to http://www.KPFA.org and pay on line with a credit card.

If that isn’t convenient please help out by calling in to a program you value at 1-800-439-5732. If you are local in the East Bay, come down to the phone room and help answer pledge calls during your favorite programs. With your support, new programming changes and coverage of vital struggles in the U.S. and around the world will continue. Without it, Ms. Engelhardt’s valuable efforts may be hamstrung.

Marc Sapir, MD, MPH, can be reached at marcsapir@gmail.