San Mateo legislator seeks to shut down state-funded construction in cities with local hiring laws and project labor agreements; proposal hurts even members of his own district 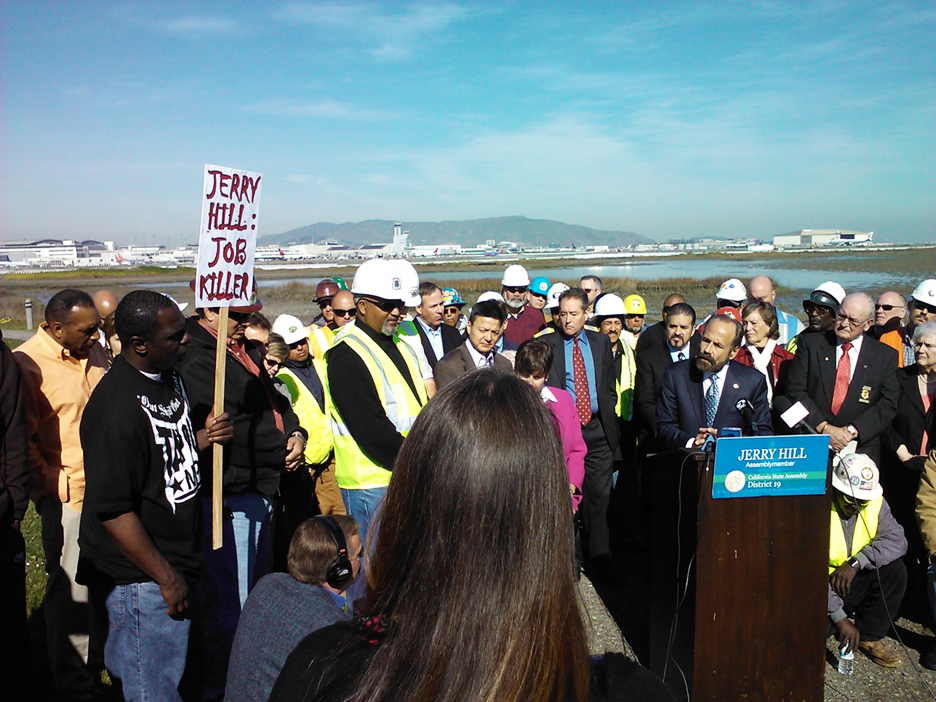 Today, however, Assemblymember Hill unveiled legislation that attacks what he calls “the increased construction costs” of local hiring by banning state-funded construction in any city with a local hiring law or project labor agreement with local hiring provisions, even shutting down Bay Area projects that residents of his own district work on. The proposal not only seeks to unravel what Supervisor Avalos and former San Francisco Supervisor Sophie Maxwell called “a New Deal for San Francisco,” but thumbs its nose at Hill’s Bay Area colleagues in Sacramento who have publicly supported the San Francisco law and its effort to coordinate the numerous local hiring policies on the books in neighboring cities such as Oakland, Richmond and Berkeley, as well as cities in Hill’s own district like East Palo Alto.

Assemblymember Hill had backed off in recent months after news that the San Francisco law exempts state- and federally-funded construction and large regional projects at SFO and on the Hetch Hetchy water system, leaving the $4 million demolition of a jail in San Bruno as the only work in his district impacted by the new law. That project will produce an estimated 24 jobs next year, with a requirement of six of those positions for San Francisco residents paying for the project and up to 18 available to San Mateo workers.

With the deadline to introduce state legislation looming, however, Hill has come back with a vengeance to shut down state-funded work for San Francisco and San Mateo union members, as well as workers in Los Angeles, San Diego, Hayward, Stockton and any other city with a project labor agreement or local hiring ordinance that promotes jobs for local residents on local construction projects. Sacramento insiders insist that Hill’s proposal is pure politics, as it would kill initiatives such as the California High Speed Rail project that state lawmakers have promoted for many years and would run through multiple cities with local hiring laws.

“We fought hard for this law in Bayview Hunters Point and in communities throughout San Francisco,” said Aboriginal Blackmen United president James Richards, a San Francisco electrician and community jobs advocate. “The local hiring law was our Christmas present and this man wants to take jobs from every community in every city trying to get a fair share of jobs they pay for with their taxes.”

“I can’t believe that a politician with local unemployment almost as high as our own would propose a law that ties the hands of opportunity for his constituents and the rest of California,” said James Bryant, director of the A. Philip Randolph Institute, a San Francisco Labor Council affiliate that represents Bay Area tradesmen and tradeswomen of color. “I was honestly surprised to learn that Hill is a Democrat.”

“Many people worked very hard to help Mr. Hill read the San Francisco law and understand that all of his concerns had been addressed in the legislation,” said Joshua Arce, executive director of Brightline Defense Project, who worked with Supervisor Avalos and other community advocates to craft the San Francisco local hiring law. “His proposal will hurt workers statewide, including in his own district.”