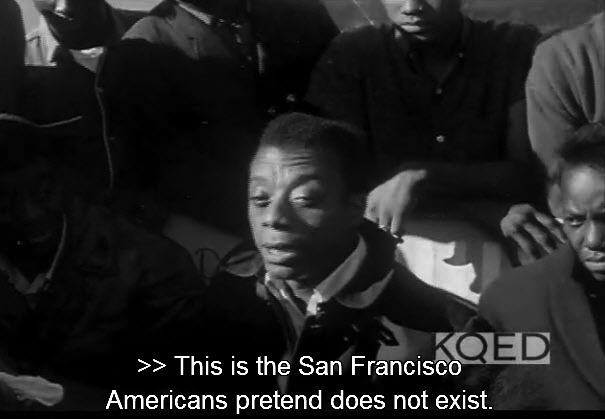 KQED’s mobile film unit follows author and activist James Baldwin in the spring of 1963 as he’s driven around San Francisco to meet with members of the local African-American community. He is escorted by Youth for Service Executive Director Orville Luster and is intent on discovering “the real situation of Negroes in the city, as opposed to the image San Francisco would like to present.”

These videos include frank exchanges with local people on the street, meetings with community leaders and extended point-of-view sequences shot from a moving vehicle, featuring the Bayview Hunters Point and Fillmore/Western Addition neighborhoods.

Baldwin reflects on the racial inequality that African-Americans are forced to confront and at one point tries to lift the morale of a young man by expressing his conviction that “there will be a Negro president of this country. But it will not be the country that we are sitting in now.”

“Take This Hammer,” directed by Richard Moore, was originally produced by KQED for National Educational Television (NET), the predecessor of WNET, and first aired in 1964. The copyright is held by WNET.ORG Properties LLC. All rights reserved. WNET.org is the premier public media provider of the New York metropolitan area and parent of public television stations WNET and WLIW.

This film was added in 2010 to San Francisco State University’s San Francisco Bay Area Television Archive, where this note appears: “The TV Archive would like to thank Darryl Cox for championing the merits of this film and for his determination that it be preserved and remastered for posterity.”

Take This Hammer from Brendan Nee on Vimeo.