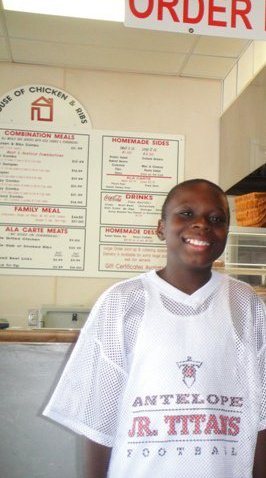 I grew up in the Western Addition on Eddy and Buchanan. My mother is Joella Barnett (Moon). She started the first free lunch program in the projects where we grew up.

Trion came to us on Jan. 30, 2009, on my birthday. Trion was in foster care in San Francisco and had no idea where his mother was or when she was coming back to get him, so he waited for more than four years for her.

My mother was informed of Trion at some point, talked to the workers in Child Protective Services and arranged a visit with me and my family. Trion’s dad was killed – murdered in San Francisco in 2001 – and we had no idea that he had a son. The mother never contacted us to help or let us know that Trion was our family member. However, from the moment I saw him, I knew he was my great nephew.

I filed for temporary custody, but Child Protective Services said that he was in a good place and even though I was family, he was better off where he was. I have graduated two children from high school and both finished college with an average of 4.2 each, one with a master’s at 23 years old. Somehow the authorities later found out that the foster home he was in was not better for him. That was when we were contacted to take temporary custody of our nephew.

It was very hard in the beginning for both Trion and my family, but this was my mother’s dying wish that Trion be placed with me and my wife. I helped Trion get on track and look forward to a better life with us than if he hadn’t been placed with a family member.

We care for him so much that it now shows in every way possible. Trion is now top in his class, just made the final of the Center Unified School District Spelling Bee. He had never played on a football or basketball team; now he has excelled in both sports in the community.

Trion has learned the family business here at The House of Chicken and Ribs, which I’ve owned now for 11 1/2 years in Antelope, Sacramento County. He is a great server. Also Trion helps my son Dominick make sauces, baked beans etc. on a daily basis before he goes to school, where he has done well enough to make great progress every day.

I just believe that had we left him in foster care, Trion would never know how much he is truly loved by his true family and new friends

Dwight Barnett, owner of the House of Chicken and Ribs, 3535 Elverta Road, Antelope CA 95843, (916) 332-7041, invites readers to drop in, say hello to Trion, and let him serve you a delicious lunch or dinner. Thanks to Barbara Harris for hooking him up with the Bay View. 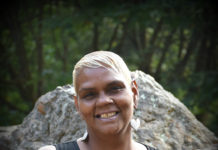