by Samuel Walton and Michelle Romero 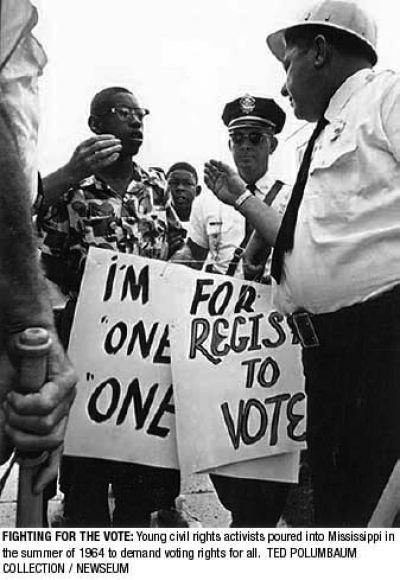 Since the founding fathers signed the Declaration of Independence and penned the United States Constitution, the issue of voting rights has been very contentious. While the right to vote is the very cornerstone of democracy, poor white men, Blacks, women and others were initially denied this right. One could argue that while the United States held itself out as a democracy, it was very much an aristocracy until after the Emancipation Proclamation and passage of the 13th, 14th, 15th and 19th amendments and the Voting Rights Act. And even that wasn’t enough.

Many Americans know about the egregious voting rights violations that were once common in the South, where literacy tests, poll taxes and other tricks – sometimes backed by intimidation and violence – systematically kept African Americans from voting. But discrimination happened in plenty of other places, including California. As a result, Monterey, Yuba, Kings and Merced counties are now required to get pre-approval from the U.S. Justice Department for any change in election procedures.

Some forms of discrimination are obvious, but more subtle ones can also be harmful. Here is one you may not know about – redistricting, the process of re-drawing district boundaries to ensure equal representation. Redistricting occurs every 10 years, following the U.S. Census.

State legislatures in many states have used redistricting to minimize and/or deny racial and ethnic minorities their right to representation. They do this by drawing lines through a given community to disable that group’s collective voting power, or by packing them into as few districts as possible to ensure their voice is small in Sacramento and Washington.

In these cases, we end up not much better off than when we didn’t have the right to vote at all.

In California, Propositions 11 and 20 recognized the abuses by the California Legislature and reassigned the responsibility for legislative and congressional redistricting to an independent Citizens Redistricting Commission. Beginning this year, California will redistrict using this completely new procedure. We’d better pay attention.

State legislatures in many states have used redistricting to minimize and/or deny racial and ethnic minorities their right to representation. Given the systematic inequalities and racism that still exist today, it is crucial that people of color get involved in this process.

The result of this new redistricting procedure should be a more open and transparent process. The commission is even required to hold public hearings to hear from the people about where we think the lines should be drawn. The question now is, will we show up?

Given the systematic inequalities and racism that still exist today – look at the vile rhetoric coming from the Tea Party crowd, for example – it is crucial that people of color get involved in this process. Think about what might happen to our communities if we were to be silenced again. If low and moderate income voters were silenced, politicians could stop funding public education, affordable housing or social services altogether.

Or imagine what could happen to Latinos if their communities were divided and their votes no longer counted. We could have an Arizona-style “papers please” law in a heartbeat, turning anyone who looks “foreign” into a second-class citizen. Or perhaps politicians’ pandering to public fear would have them all put into concentration camps. That may sound far-fetched, but it actually happened to Japanese Americans during World War II.

District lines need to respect communities – including racial and ethnic minorities – so that everyone’s voice can be heard. If we don’t speak up, someone else will be speaking for us – and for the next 10 years, we’ll be stuck with their decisions about who represents us in Sacramento and Washington.

We need to educate ourselves, show up at community meetings and tell the commission, “This is my community. Don’t divide it!”

As part of The Greenlining Institute’s statewide campaign to ensure that California’s low-income communities and communities of color are heard as legislative district lines are being drawn, the institute is sponsoring a series of community meetings around California. The meetings are starting as new census data is released, enabling the nuts and bolts work of redistricting to begin.

“These meetings are designed to educate our communities about what redistricting is and what’s at stake,” said Greenlining Institute redistricting fellow Michelle Romero. “A newly-created Citizens Redistricting Commission is about to determine where the lines are drawn and whether we will have a voice in Sacramento and Washington, D.C. It’s important that our communities get involved in this process to ensure we are fairly represented.”

The list of meetings now scheduled is shown below. Each will include a 30 minute educational and informational segment, followed by small group break-out sessions aimed at helping community members learn to identify and advocate for the interests they care about.

All are welcome, but those wishing to attend are asked to RSVP to Michelle Romero at micheller@greenlining.org or (510) 926-4016. More information about Greenlining’s redistricting efforts is available at http://www.greenlining.org/initiatives/redistricting.

The Greenlining Institute is a multi-ethnic public policy, research and advocacy institution. Learn more and get involved at www.greenlining.org.

Texas oil companies are attacking our communities with Prop. 23