Washington – Congresswoman Maxine Waters, D-Calif., and the African American members of the House Financial Services Committee, known as the FS 10, were recently honored by the Black Press of America and the National Newspaper Publishers Association Foundation (NNPAF) with the 2011 Political Leadership Award for their work during negotiations for the Dodd-Frank Wall Street Reform and Consumer Protection Act of 2010. Congresswoman Waters and Congressman William Lacy Clay Jr. accepted the award on behalf of the FS 10 at an event last week at a Newsmaker Dinner and Gala at the Omni Shoreham Hotel. Afterward, she issued the following statement. 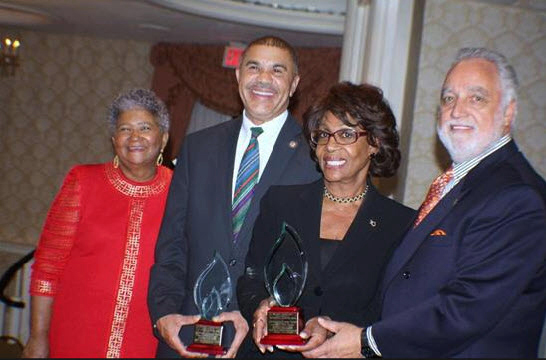 I know I speak for my FS 10 colleagues when I say that we are very humbled to have received this award from the Black Press of America and NNPAF. It was a particular honor to receive the 2011 Political Leadership Award from my friends Dorothy Leavell and Danny Bakewell. Congressman Clay and I graciously accept it on behalf of our colleagues, in the name of those we have all spent a lifetime – especially so over the last year – advocating and standing up for: minorities, women, the poor, those facing economic and social hardship, and anyone whose voice is naturally or willfully ignored in the halls of power.

Dodd-Frank is an extremely important and powerful law that increases consumer protections, enforces stricter rules and oversight for Wall Street, and helps people and communities who are struggling from the worst recession since the Great Depression. But it wasn’t originally so strong. My FS 10 colleagues and I quickly realized that we could leverage our numbers and our power on the committee to make the bill stronger. We knew we couldn’t just go along to get along when we had a real opportunity to make a difference in the lives of millions of Americans who by and large just wanted to keep their jobs, their homes and their savings.

So we got to work. And as a result of that work, we secured an additional $1 billion for the Neighborhood Stabilization Program, which I authored three years ago to help communities clean up abandoned and foreclosed properties that blight neighborhoods and drive down property values; $1 billion for a program to help unemployed homeowners access affordable loans so they can continue to make their mortgage payments; and the creation of the Offices of Minority and Women Inclusion at the Federal government’s financial institutions to increase opportunities for minorities, women, and minority-owned and women-owned businesses in hiring and contracting opportunities.

We are very proud of our work and the overall Dodd-Frank law. But our friends in the Black Press know that we now find ourselves defending that work as Republicans seek to defund or repeal key components of the law. So the work goes on to help all Americans achieve economic security, and the FS 10 will continue to help lead the way.