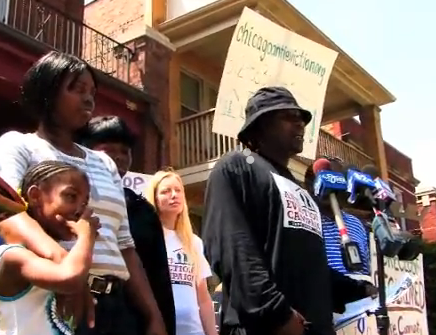 Chicago – On June 17, at 1:45 p.m. in the Park Manor neighborhood, Martha Biggs and her four children  – displaced like so many others from Cabrini Green and currently homeless  – moved into a house at King and 72nd Street near Meyering Park, two years vacant and foreclosed on by one of the top four banks responsible for home foreclosure in Chicago: Deutsche Bank.

Martha and her children will be joined by their new neighbors, members of the Chicago Anti-Eviction Campaign and others fighting for housing as a human right, as they move in furniture, towels, bedding and other items donated by their very supportive neighbors. The group will also prepare for possible opposition by police or other city authorities, though the legal case against this property, as with 1,700 others in Cook County, will be brought back into court due to fraud committed by the law firm Fisher and Shapiro, who were retained by many of the big banks to process foreclosures, including Fannie Mae.

Given the current state of housing in Chicago, numerous foreclosures and systematic evictions from public housing, Martha and members of the campaign argue that this is the only course of action that makes sense. According to the 2010 census, Chicago’s housing vacancy rate was 12.5 percent and, with 10,000 foreclosures filed every day in the U.S. and banks refusing to work with homeowners or tenants, that number is likely to increase everywhere.

According to the Woodstock institute, over 99 percent of homes lost to foreclosure since 2008 have gone back to the lender and not to a family. Because these mortgages were federally insured, the public has effectively bailed out the bank in each foreclosure and thus the banks have no incentive to work with homeowners or tenants in foreclosed properties, this homes may be in need of a repairman or a water damage Houston TX service, but not the owners or the bank provide these services. Meanwhile, the state and city continue to receive funding for modification programs with which the banks need not comply and for programs to address vacancies that community groups cannot access.

Six weeks ago Martha Biggs joined up with skilled campaign members like Alvaro Tellez, who successfully fought HSBC to keep his home. They trained volunteers and got to work on one of these vacant homes, repairing damage resulting from vandalism, including drywall, plumbing and painting. They did all this work with financial and material donations procured by the campaign and community.

While this is just one house and one family, the group hopes to inspire other community groups to reclaim land and housing in their own communities and to think critically about how this crisis is part of a recurring cycle of displacement and dis-empowerment. They also want to force the city to get serious and act, hopefully encouraging them to work with the community members impacted by foreclosure, eviction and unemployment, as well as stopping the diversion of millions of dollars of public resources to institutions who are not invested in those communities while claiming that there is no revenue to fund public housing, schools, clinics or job programs.

Martha Biggs has committed to fighting for this house and her new community and while it may be just one property, it’s also a long hoped-for home for her family.

As Pat Hill, community member and co-convener of IYPAD (International Year for People of African Descent) Chicago put it:

“We are truly proud of the good citizenship shown by these young people. The land truly belongs to the people, not the government, not the banks. What these young people have done is proper and correct and that is evident by the community’s overwhelming show of support. It’s time for the people of Chicago to come together on behalf of one another.”

Willie J.R. Fleming is the founder of the Chicago Anti-Eviction Campaign, featured in the NESRI Campaign To Restore National Housing Rights, the USHRN Land and Housing Action Group and the Chicago Hip Hop Congress. For more information on the work in which he is involved, go to http://chicagoantieviction.org/ and www.restorehousingrights.org.