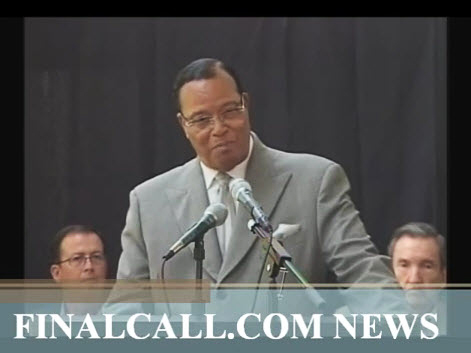 Nation of Islam leader Minister Louis Farrakhan delivered a scathing statement on the relentless bombing of Libya by NATO forces at a press conference held at United Nations Plaza Hotel Millennium in New York City on Wednesday, June 15, 2011. Minister Farrakhan’s acute analysis of the situation in Libya and international politics was insightful and educational. The press conference had a live link to Libya and South Africa and will be translated into Arabic for the Libyan people.

Minister Farrakhan began: “I am here to discuss the current state of affairs in Libya and the actions taken by the U.N. with respect to Security Council Resolution 1973, passed on March 17, 2011. I am addressing my remarks to the U.N. and all of those who have joined to destroy Brother Leader Col. Muammar Qaddafi and the Libyan Jamahiriya”: namely the U.S., U.K., France, Canada, Italy and Germany, including also China and Russia, who abstained.

Demanding the justification for such an action, Minister Farrakhan said, “If the Security Council passed Resolution 1973 to protect the people of Libya from the so called ‘evil intentions’ of the leader … Why then is NATO now using Resolution 1973 as a pretext to assassinate Muammar Qaddafi and create regime change?” Minister Farrakhan questioned the U.N.’s fostering of armed rebellion and civil war and not humanitarian concerns.

“They say that he [Qaddafi] has lost the moral authority to lead because he has killed his own people. But they have not proved that charge,” he said.

He then compared their historic record of murder throughout the world by Western nations to the record of Libya. He cited America’s decimation of the indigenous people of the U.S., the transatlantic slave trade, atomic bombs dropped on Hiroshima and Nagasaki, the war on Iraq based on lies causing the death of thousands of U.S. soldiers and hundreds of thousand Iraqis, and England’s abuse of the people of Asia, Africa, the Caribbean and all the places that they ruled.

“They say that he [Qaddafi] has lost the moral authority to lead because he has killed his own people. But they have not proved that charge,” he said.

Minister Farrakhan then compared the conditions of the people of Libya to the people of the West, particularly the U.S.’s poverty, homelessness, lack of health care, decaying infrastructure, crime and illiteracy, which are virtually unknown to the Libyan people. The massive profits from their nationalized oil reserves are shared with the people. Development of the country has been phenomenal under the leadership of Col. Qaddafi. They transformed the desert into farmland through massive irrigation projects. While the people of the U.S. are burdened with a $62 trillion national debt, Libya is debt free.

Further, “NATO and America are trying to recolonize Africa through AFRICOM (African Command). My question to African leaders is, will you allow it? Out of fear of the so-called power of the West: Will you bow down and act against the interests of African people worldwide?”

“Look at the arrogance of Hillary Clinton, the secretary of state, speaking in Addis Ababa, the capital of the African Union. That’s some gall, to go right to us and tell us like children what she wants us to do.”

“My question to African leaders is, will you allow it? Out of fear of the so-called power of the West: Will you bow down and act against the interests of African people worldwide?”

Minister Farrakhan then quoted Clinton’s speech: “It is true over many years Qaddafi played a major role in providing financial support for many African nations and institutions including the African Union.”

Col. Qaddafi has been a principal advocate and organizer for a United States of Africa.

Clinton continued, “But it becomes clearer by the day that he has lost his legitimacy to rule and we are long past a time where [Qaddafi] can and should remain in power.” Clinton urged them to “call for a genuine cease-fire and call for Qaddafi to step aside.” Further, Clinton urged them to suspend operations of Qaddafi’s embassies in their countries, expel all pro-Qaddafi diplomats and increase support for the Transitional National Council.

Some African leaders have condemned NATO’s war on Libya and their aggressive attempt at regime change at any cost, including assassination.

A member of the press asked what we could do. Minister Farrakhan reiterated the plans laid out by Viola Plummer, who called for a Harlem Millions March against the attack on Africa (Libya and Zimbabwe) and Bloomberg’s attack on Black people in New York City. The march will take place on Saturday, Aug. 13, in Harlem.

Minister Farrakhan gave his full support to the march and explained the “importance of Black people in the U.S. exerting their collective influence over U.S. policy during this election year. Black elected officials, including President Barack Obama, must be held accountable and we must push them to stand up in the interest of African people worldwide.”

For more information on the upcoming Harlem Million March to end the bombing of Libya, illegal sanctions in Zimbabwe, and Bloomberg’s destruction of education, housing and health care, call (718) 398-1766.

Amadi Ajamu can be reached at mamadi4@aol.com.