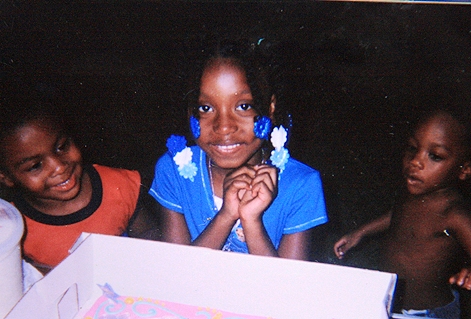 Detroit – One year after a Detroit police assault team shot 7-year-old Aiyana Stanley-Jones to death in her home while A&E’s “First 48” TV show was filming, neither Wayne County Prosecutor Kym Worthy nor U.S. Attorney General Eric Holder has brought charges against those responsible.

“This was an assassination by video,” said Roland Lawrence as he and others watched a small plane fly a sky banner demanding “Justice for Aiyana Jones” over the east-side Detroit neighborhood where Aiyana lived with her family on the anniversary of her death, May 16.

“It is an insult to me as a human being and to the rest of the community that no one has been charged. Aiyana represents all this city’s little children who are already vulnerable. The police actions were absolutely reckless and showed a total disregard for a poor Black community.”

Lawrence heads the Detroit-based “Justice for Aiyana Jones Committee (JAJC),” which conducted a Facebook campaign to raise funds for the company Traffic Displays to fly the protest banner. The plane repeatedly looped over Aiyana’s neighborhood and east-side Detroit to the downtown Detroit headquarters of Prosecutor Worthy and the Detroit police and back.

Cornell Squires of the JAJC said he has worked for years against police brutality since he and his family were victimized by Detroit police officers Robert Feld and William Melendez. He is also a co-founder of the Original Detroit Coalition Against Police Brutality.

“We want charges brought against the police for killing Aiyana,” Squires said. “They are also guilty of many other unjustified homicides, but Kym Worthy has not brought charges in a single one of those cases since taking office. Even Officer Eugene Brown, who killed three people, is still free.”

In a recent news report, Brown was shown brandishing his gun and boasting that he is still on the job while his union appeals his recent discharge for overtime fraud.

The family’s attorney, Geoffrey Fieger, said they were very grateful for and supported the memorial protest. He has filed civil lawsuits, one against the Detroit police and one against A&E and “The First 48” on behalf of the family. 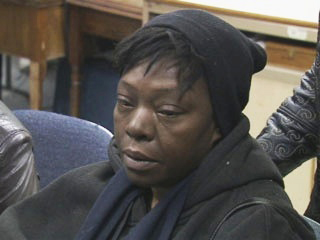 Aiyana’s grandmother Mertilla Jones expressed profound grief on the first anniversary of the child’s death in comments on her Facebook page:

“Ohhhh My BABY Ms. AIYANA JONES !!!!” Jones wrote. “ITS 1 YR. SINCE THAT DAY I WATCHED N HORROR AS THE DIRTY COPS N DETROIT, MI MURDERED U! I’m hurtn so bad everyday all day 4 tha last yr. Livin w/o you. Missin & Lovin You AIYANA!”

The little girl was sleeping with her grandmother on the family’s living room couch at 12:30 a.m. May 16, 2010, when police tossed an incendiary grenade through the window directly above the couch. Fieger commissioned a second autopsy which showed that an officer shot Aiyana through the top of her head from the doorway, as the bomb exploded.

Detroit police identified the officer as Joseph Weekley, a featured star on “The First 48” for several years before Aiyana’s death. He previously shot two dogs to death in front of small children in another home invasion. Aiyana’s cousin said he warned the “Special Response Team” that there were children in the house when they threw him to the ground and handcuffed him prior to the assault. 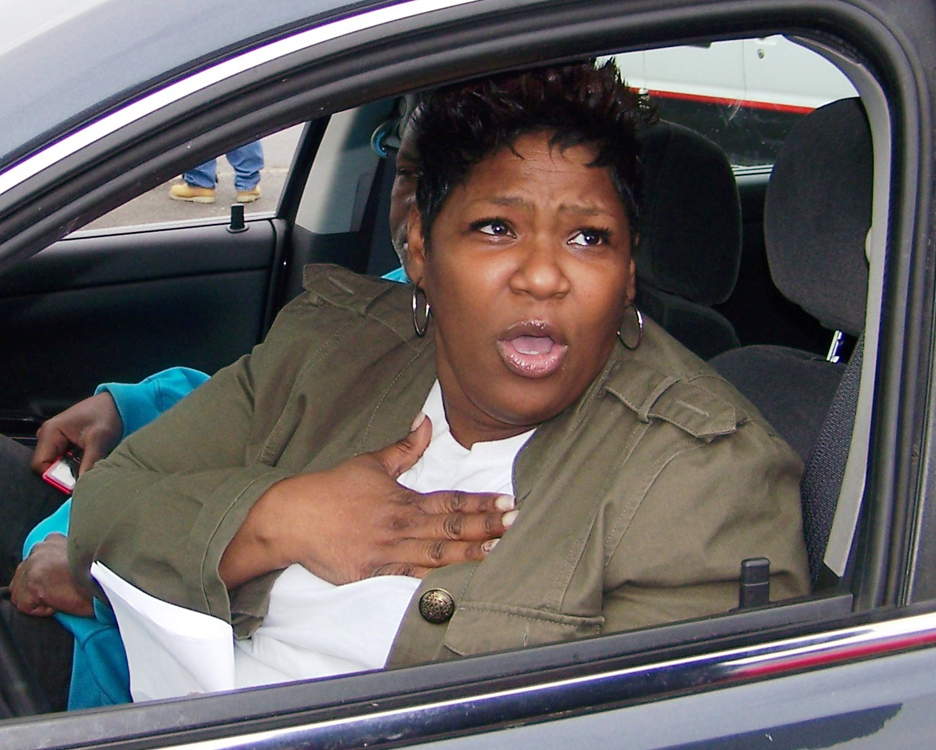 The police said they had a murder warrant for Chauncey Owens, who lived in the upstairs flat above Aiyana and her family. Fieger said later that a police surveillance car saw Owens leave the flat at 6 p.m. the previous day and could easily have arrested him then.

Owens pled guilty to killing 17-year-old Je’Rean Blake Nobles on April 11 after numerous pre-trial motions filed by his attorney. They included motions to suppress statements and for a competency hearing.

He is scheduled to be sentenced May 23 in front of Wayne County Circuit Court Judge Richard Skutt. He is allegedly to receive a reduced sentence in exchange for saying that Aiyana’s father Charles Jones gave him the gun he used.

“They said they were out to serve a warrant for a murder suspect,” Lawrence said. “But they wound up murdering a little girl. This would not have happened in Grosse Pointe. They were showing off for the cameras.”

Tracy LaRock and a friend were in the Warren-Conner shopping center parking lot as news cameras gathered to film the sky banner.

“This was heart-breaking,” LaRock said. “I have a 5-year-old girl and a 13-year-old myself. But, Kym Worthy, you won’t charge these police officers? There isn’t any way these men are not supposed to be charged. We need to get rid of Worthy. How can she be so focused on Kwame Kilpatrick, but she won’t go after cops who threw a bomb and shot in the house and then lied on Aiyana’s grandmother to cover it up, and they have it on videotape? Kym Worthy has an adopted daughter. If that was her daughter, these cops would have BEEN charged! Kym, WHAT IS THE PROBLEM?”

Worthy gained national publicity for bringing perjury charges against Detroit’s former mayor because he denied having an affair with his chief of staff during testimony in a civil lawsuit. She recently asked the state parole board not to grant him early release. 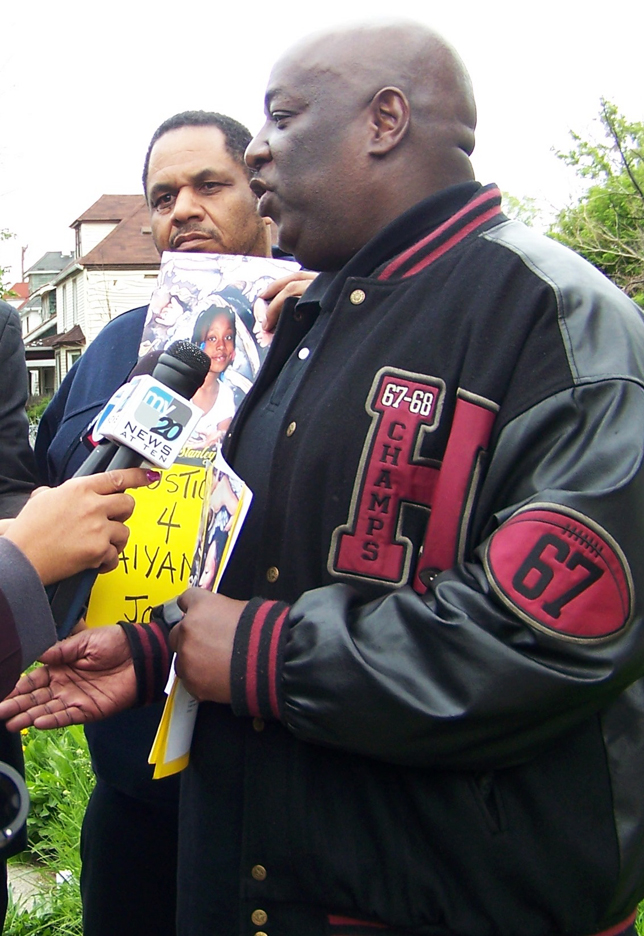 Lester Barnett, chef at the Detroit Yacht Club and owner of classycaterers.com, said he lives in the neighborhood where the police killed Aiyana.

“I’m glad to see that people have not forgotten this young lady,” he said. “My community is glad. We will keep Aiyana and her family in our prayers, and we want justice, too. If not now, when?”

Worthy immediately turned the investigation of Aiyana’s killing over to the Michigan State Police, saying she wanted to avoid the appearance of a “conflict of interest” because of her ties to the Detroit police.

“I agree that it is most appropriate that this be done independently,” Worthy said then.

But on May 16, Worthy issued the following statement:

“The Michigan State Police (MSP) conducted a 9 month investigation into the death of Aiyana Jones and turned it over to my office in March 2011. In any police shooting we conduct our own independent investigation. When MSP turned the matter over to us, we candidly indicated that our investigation would be a lengthy investigation, and that continues to be the case today. We are more concerned with being thorough than being rushed in this important case. We can have no further comment at this time in this ongoing investigation.”

Subsequently, U.S. Attorney Barbara McQuade, head of the Justice Department’s office in Detroit, said in a statement: “The shooting death of Aiyana Jones is a tragedy and our condolences go out to family and friends of this little girl. While the Michigan State Police is the lead investigative agency handling this case, the Department of Justice is monitoring the situation.”

Later, McQuade said in published remarks: “The Michigan State Police is investigating and so we are sort of standing by and keeping track of what’s going and to see if that’s resolved satisfactorily. We’ll wait for that process to conclude.”

McQuade issued the following statement regarding the current situation: “As a parent and member of this community, I can understand the frustration with the amount of time that has gone by since Aiyana’s death without a resolution. However, I also understand and respect the care that is required in investigations to ensure that justice is served. We are currently awaiting the conclusion of the state process before we consider federal action.”

McQuade has not yet responded to a request for clarification regarding whether she is including the county prosecutor’s investigation in the “state process.”

In the past, Prosecutor Worthy’s office has informed this reporter that cases were still under investigation, when in fact the investigations and the cases had been closed for some time.

Before press time, the office of U.S. Attorney General Eric Holder had not responded to a request for a statement on whether they will investigate the killing of Aiyana Stanley-Jones in response to community demands for justice.

For more information, email The Justice for Aiyana Jones Committee (JAJC) at justice4aiyana@hotmail.com or call (313) 989-8850. The committee is also on Facebook.

Detroit-based journalist Diane Bukowski is the publisher of The Voice of Detroit, was an investigative reporter for the past decade for the Michigan Citizen newspaper, and has been an activist in union and people’s struggles for 40 years. She can be reached at diane_bukowski@hotmail.com.

‘Help bring me home for the holidays,’ a life and death appeal from renowned people’s attorney Lynne Stewart