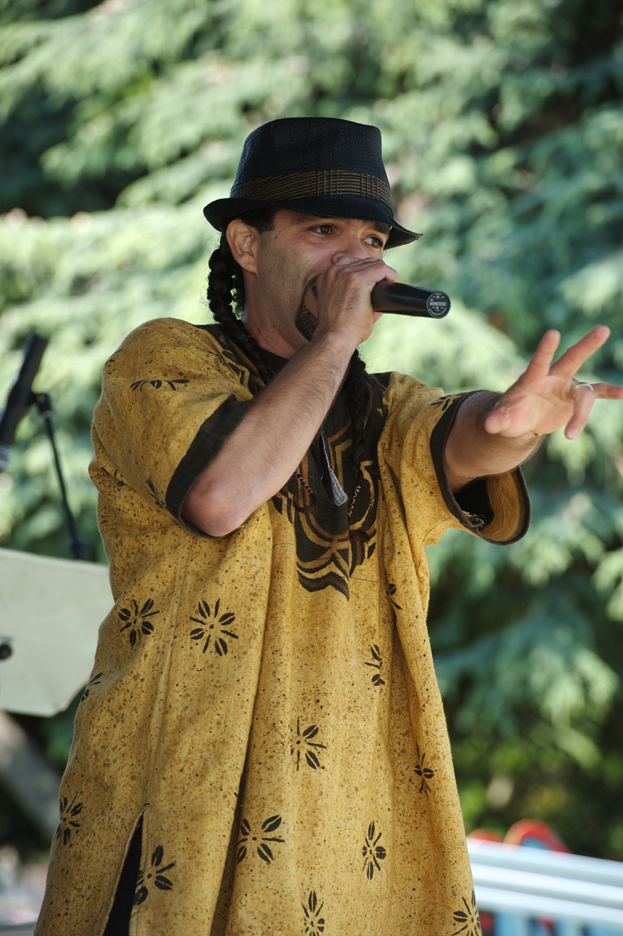 Rico Pabón is one of the most talented, versatile, dedicated and well-informed artists that I know on the West Coast. At home in the studio or on the stage, the Afro-Puerto Rican bilingual musician known as Rico Pabón is a man of many genres. Although hip hop is the music of his generation, he is just as comfortable singing traditional Afro-Carribbean tunes with a live band.

Music is becoming more and more accessible on a global level due to the internet, which in turn means that future trends will reflect more of a global sound. Rico Pabón is on the forefront of this innovation. Check him out in this exclusive Q&A …

M.O.I. JR: I understand you come from a musical family. When did you notice that you were a musician?

Rico Pabón: I have an uncle who has made it a point to teach all of his nieces and nephews something about music, beginning with the clave, which is the backbone of most African rhythms. Those rhythms are the same ones we hear in traditional Cuban, Puerto Rican, Haitian and Brazilian music, to name a few.

I can’t say that I remember not playing music in my life. We always had congas, bongos, claves, maracas, cowbells and a guiro at home and playing was just a part of living. To this day we bang on the pots and pans when there aren’t any instruments around. Actually, on my last album, there is a bell part that I play on two frying pans. Music is everywhere.

I found my voice as an emcee at around 15 years old, right in the middle of some of the hardest times of my life.

M.O.I. JR: What kind of music did you start off playing?

Rico Pabón: My introduction to playing music was first learning clave, then learning a basic mambo pattern on the conga drums – which is what you hear in salsa songs frequently. But when I was young, my passion wasn’t the music that my family played at home, but the funk and R&B that my auntie Janet grew up listening to and singing: Stevie Wonder, Prince, Michael Jackson, Teena Marie, Rick James, Herbie Hancock, Sugarhill Gang, Marvin Gaye, man, forget about it. That was my bump! But I have to say, the first music I started playing would have to be “salsa” and bomba, which is our traditional Afro-Boricua music.

M.O.I. JR: How would you compare traditional Puerto Rican, Cuban, African and hip hop music, considering that you dibble and dabble with all of these?

Rico Pabón: Well, I see them all as just different expressions of our African selves. Depending on the day, I may feel like some “traditional” Puerto Rican music, some “traditional” Cuban music or some “traditional” hip hop music, and they each are their own thing of course, but at the root is always Mama Africa. I love bringing them together whenever possible.

Actually, I’m working on a song right now that was inspired by a brother I met at an open mic that I was hosting for a while. He had been out here for only three days from West Africa – Gambia, I believe – and he played a song on an instrument called the kora. This instrument is ancient and to play it, you are usually born into a family of kora players. It is a gourd with a long neck, like a baby upright bass, but it has a gang of strings and it sounds almost like a harp.

The song brought me to tears and it had no words, but it spoke to me in my soul. It felt like home to me. I ended up writing lyrics to it and when I brought it to a guitar player that I’m working with, he told me that what this brother was playing was called a “Seis Mapeye” in traditional Puerto Rican music, but in P.R. it’s played on a cuatro, which is a 10 stringed guitar related of course to the kora, by way of Spain, by way of Africa.

It made sense why the song was so familiar. Africa is everywhere. I recorded the song with the cuatro and the kora together, and I’m singing a traditional style known as decima, and I rhyme at the end for about two minutes straight: no breaks, no hooks. The song is eight and a half minutes long, but it should sound like what it was: a journey back to ourselves.

M.O.I. JR: How long have you been a rapper on the Bay Area scene? 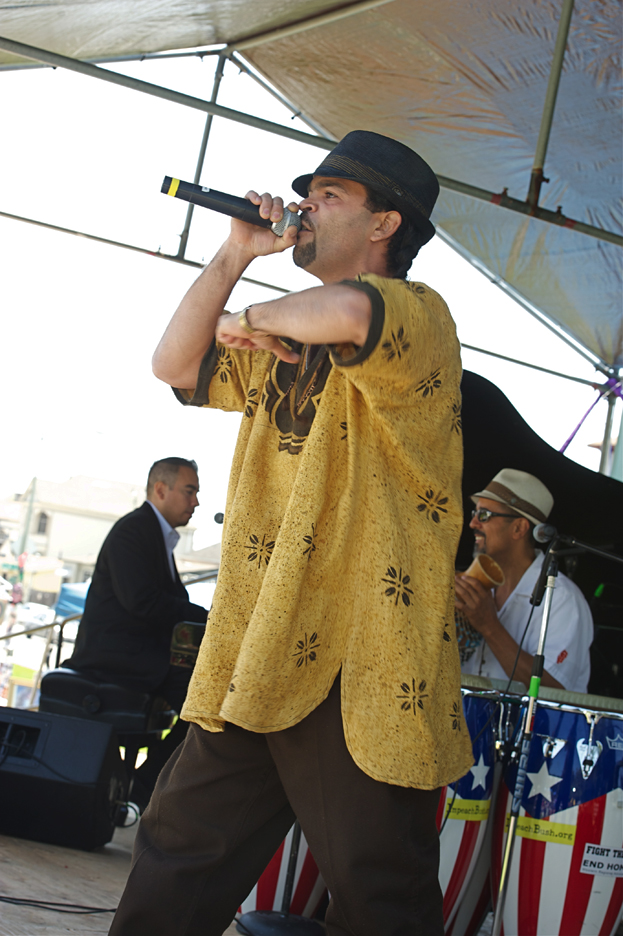 Rico Pabón: Since the dawn of man. Some of my rhymes are carved into the concrete that hold up the pillars of the Bay Bridge. Just kidding, papa. About 20 years or so starting with my first group, “Prophets of Rage,” back in the four-track and cassette tape days.

M.O.I. JR: I remember talking to Dead Prez about you in early 2000 and something. What kind of attention have you received nationally and internationally?

Rico Pabón: You know, it’s hard to tell. But when I first met M1, I believe through you, good brother, he told me that they heard about us when they were on their first trip to Africa – crazy. Music is alive and it moves around. There’s a bootleg of my second album that I found got released in Germany, and there are folks in France who are still trying to buy my first album from way back. You never know what type of attention you really get. But I love the Bay. This is where there had always been love, every time. There’s no place like it.

M.O.I. JR: What do you think about the student movements in Puerto Rico right now?

Rico Pabón: It’s a damn shame that young people still have to put their bodies on the line just to get treated fairly. Puerto Rico is still a colony of the U.S. What I really think is that I expect nothing more from a colony. Since when did the colonizer care about the indigenous peoples of the land? I salute those young women and men who are standing up for our future.

M.O.I. JR: What do you think about the issue of political prisoners, especially the Puerto Ricans who are imprisoned for fighting for independence?

Rico Pabón: Well bro, Puerto Rico is still a colony of the U.S., so until that changes we will continue to have a legacy of people fighting for their birthright. What I will say is that it’s wicked: the way that people can be incarcerated for their ideas – while true criminals run rampant all over the world, murdering people for profit, destroying the Earth for material things – and all we want is to be able to decide our own fate. That is truly criminal.

M.O.I. JR: What are you working on now musically?

Rico Pabón: I’m working on a few albums right now. I’m doing an album that will be a blend of hip hop music, reggae dancehall and traditional Afro-Caribbean music of all types. That will be ready by the end of the year or so. I’m not really putting a date on it because I want to work on it until it’s complete.

I’m also working with John Santos on his new project, “Filosofía Caribeña,” which he will release next year I believe. I’m working with Linda Tillery and the Cultural Heritage Choir and just finished recording with Linda on some new and old material from her extensive library of songs.

I also just completed an album with an artist by the name of Joowan Kim. He put together a “hip hop opera” of sorts. It’s a blend of classical music and hip hop, with a story that runs all the way through like an opera. He completed Part 1 with Kirby Dominant as the emcee, playing the role of the Black Swordsman. I will be the emcee on Part 2, playing the role of the Water Bearer. We will start presenting Part 2 in September, I believe.

Last but not least, I’m working on another hip hop album of my own. I’ve got a gang of beats and I’m just trying to bang them out with the little time I have in a day.

M.O.I. JR: Your family used to have a Puerto Rican restaurant in the Fruitvale district of Oakland. Are you guys going to ever reopen in Oakland?

Rico Pabón: I won’t ever re-open anywhere, ever again. Although I enjoyed watching the community build itself within the walls of my old spot, being a restaurant owner wasn’t my passion, and what is life without passion? I had to redirect my energy into what keeps my spirit alive and that is making music.

M.O.I. JR: How has being a father contributed to your work?

Rico Pabón: All of the beliefs that I had about the world and correcting the injustices have just been multiplied a hundred fold by having children. I’m also a lot more careful about what I say and how I say it. I only want to write from a perspective of love and hope so that it may manifest itself in this world that we will leave to our children.

I also feel like I am every child’s father. I love children more than ever and I realized only after having my own that I love them not because they’re “mine” but because they are love. They are God. I knew as soon as I met my son that I could raise any child as my own, because we are all connected and children are the purest of beings, and none of them “belong” to any of us. They are sent here to guide and teach, to follow and learn, like all of us.

Thanks JR! Much love and respect to you, hermano. Keep doing your thing bro! Your work is our voice.