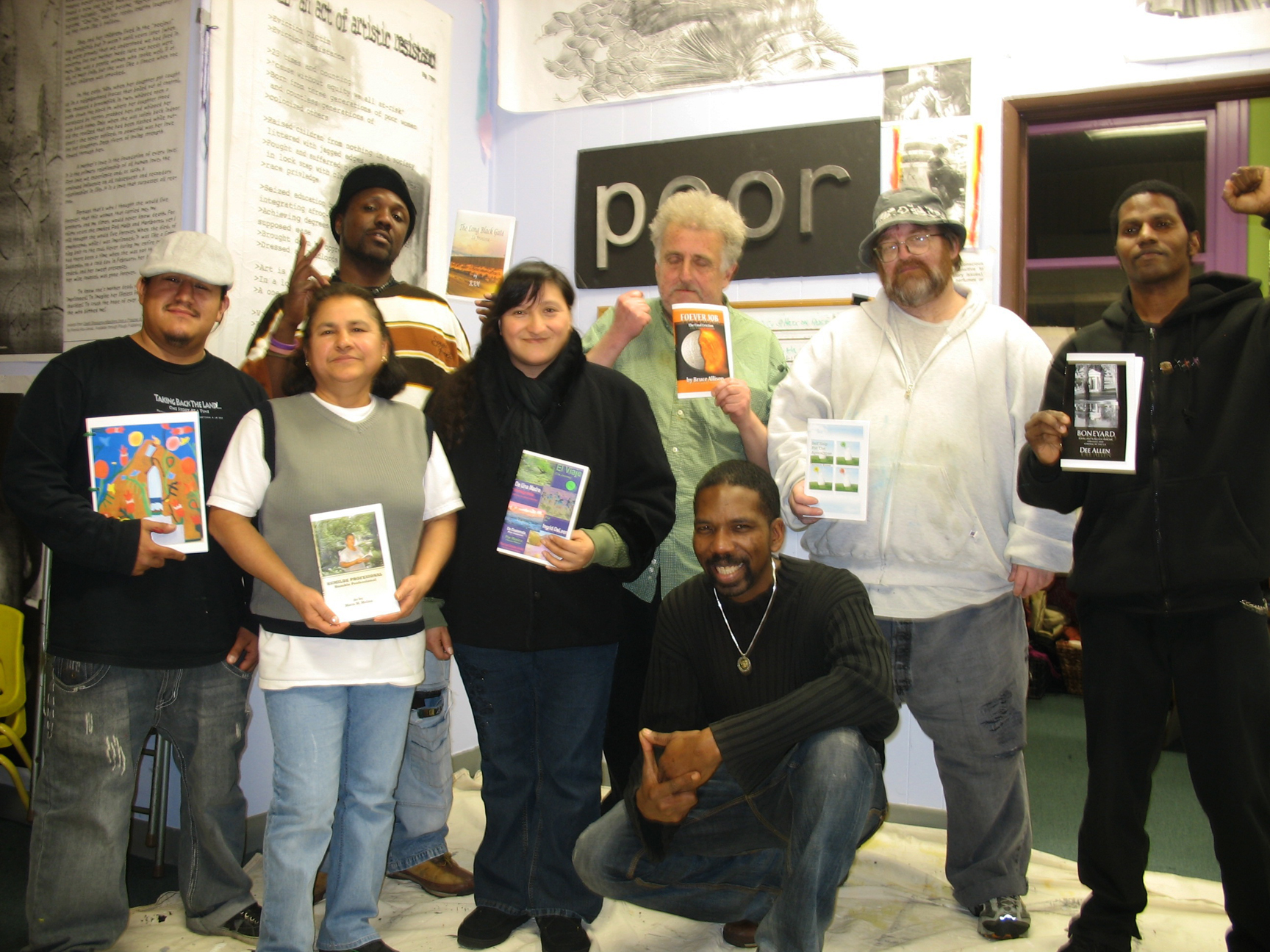 One of the most interesting publishing ventures in the San Francisco Bay Area is the POOR Press project. This revolutionary bi-lingual enterprise grew out of POOR magazine, a journal of poetry, polemics and righteous articles created by the inimitable Tiny, aka Lisa Gray-Garcia, the indomitable force and magnet of affirmation of the people on the street, the economically poorest section of this society and her late mama who is always still close to Tiny’s heart and always evoked by her in a continuous solidarity.

The POOR Press project is central to the struggles especially of the immigrants from Latino countries, of African Americans, Native Americans, Filipinos and the homeless and poor of whatever color or ethnicity.

In short, this is a people’s press, by which I mean that I would prefer reading the books of these “poor” poets and writers – and that word is so ironically apt because there’s nothing poor about the POOR Poets, their expressive energies are what real poetry is all about – rather than what goes into the upper realms of literature. Any day.

A few weeks ago I had the great pleasure of reading a poem I wrote in Tagalog about Al Robles, the late and great poet and community organizer of the Manila-town Filipino people. The POOR scholars – that’s correct, these are scholar poets and scholar artists – were dedicating a room in their offices to the beloved Robles. So there is now the Al Robles Library as part of the POOR Magazine complex on 16th Street in San Francisco’s Mission barrio.

It’s a small room housing Al’s library and other books, but it’s got his heart everywhere and anyone entering it cannot help but feel his presence.

To give some idea of what the POOR Press is about, one of its biggest books is “Los Viajes” (“The Journeys”), which is 180 pages of poetry, prose and art – defining, manifesting and affirming immigrant life in the States.These are stories, images and sounds of people crossing borders all over pachamama, mother earth.

Here’s an incredible line by Mexican poet Silencio Muteado from his poem in the anthology, “What is the Amerikkkan Dream?”:

“What dream got you in that car trunk, in the middle of the border line?/ Is that the American dream?”

Every aspect of immigrant struggle is manifested in this extraordinary book which ought to be read by all as a work that can really save one’s humanity in a time of insane wars and chaos.

Ingrid Deleon, who is included in the anthology, also has a book of her own story of one immigrant mother and her journey from Guatemala through Mexico to the United States.

And there’s the wonderful poems and stories of Tony Robles in his book, “Filipino Building Maintenance Company.” Tony is the nephew of Al Robles and, raised in the latter’s shadow, he has developed into an important voice especially for the Filipino people and their familial continuity.

Likewise, with powerfully intense activist fervor, is Dee Allen, whose book is called “Boneyard Poems and Songs of African Struggle and Survival in the U.S.” Allen is a member of the Revolutionary Poets Brigade and has written terrifically animated poems of both class and race issues. For examples, some lines from “Under Suspicion”:

“Guilty of being an/ innocent piece of dark meat/ looking forward to an/ honest day’s toil.”

The poetry books of POOR Press are small editions – “Los Viajes” is an exception – of about 30 pages each and include a book of stories by Marlon Crump and the outrageously brilliant “Life, Struggle, Reflection”poems by Queennadi, who writes blingo or black lingo, blango or black slang – and is ebonically ebullient on virtually every page of her book.

These are poets and storytellers who are making hope get the hell up from the grave that this conniving and warmongering government has sentenced it to, and pointing a way to a future that just might belong to all.

Jack Hirschman, one of the legendary Beat poets who still hangs out at Caffé Trieste in North Beach, is former poet laureate for San Francisco, current poet in residence at the San Francisco Public Library, and the author of more than 50 volumes of poetry and essays. He is also a painter and collagist who has translated over two dozen books from German, French, Spanish, Italian, Russian, Albanian and Greek. Visit his Facebook page, at http://www.facebook.com/pages/Jack-Hirschman/106125266085635.

‘In My Country’ is in his heart

Another world defined by community not corporations

A journey to publishing access: POOR Press books for 2009