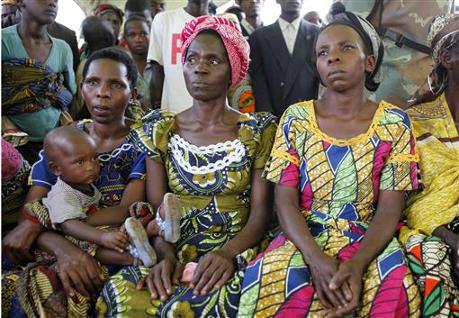 Alertnet posted this Médecins Sans Frontières and Reuters news, with this headline, photo and subheads, to their website on June 23, 2011:

“KINSHASA, June 23 (Reuters) – About 100 women have been sexually assaulted and many more injured in the latest mass rape by suspected rebels in eastern Democratic Republic of Congo, international aid workers and local media reported on Thursday.”

Same news report for over 10 years

So can we just stop and think about this a bit?

Congress, including President Obama when he was a senator, the U.N. Security Council, Hillary Clinton, John Prendergast and his ENOUGH Project, Lisa Shannon and her “Run for Congo Women!” Eve Ensler and her “V-Day” and many more have been talking about this for well over 10 years – with no end in sight.

I’m sure that some of these people are well-meaning. I’m sure that some have provided some real comfort on the ground. But let’s think about this just a little bit. Let’s think about “rape blamed on rebel soldiers, eastern Congo still unstable after war.” The world has been reading this report, the same report, over and over for well over 10 years.

‘Rebels’? Rebelling against whom, to what end?

Just who are these “rebels” supposed to be rebelling against? With what aim? Identifying the perpetrators as aimless and amorphous “rebels,” the indistinct label for most all gangsters a.k.a. armed profiteers and combatants paid by whomever for whatever in Congo, just creates a vague, insoluble, unending tragedy and benefits no one but the mega-NGOs who raise huge amounts of money to keep responding.

Or are they furthering the aims of those heads of state by shattering communities in eastern Congo, driving people into refugee camps and thus separating them from the vast resources that corporations and government geostrategists of the major world powers – most of all the U.S., its allies and China – are so determined to control?

Even if the “rebels” are simply mineral smuggling gangsters or freelance terrorists serving mining companies and mineral smuggling syndicates, the effect is ultimately the same. They’re not rebelling against, i.e. trying to overthrow, a government. They’re terrorizing people. Not just women. People. They’re driving people from their homes and communities off of their land and away from their resources into refugee camps.

Cui bono, as any good legal reasoner or anyone who takes the time to consider the logic and consequence of all this would ask. Who benefits from all this tragedy and chaos, including mass rape, in eastern Congo?

Why so many years of the same vague news report?

Why so many years of the “rape blamed on rebel soldiers, eastern Congo still unstable” report? One answer is just lazy news reporting, but another is that more precise reporting and analysis would be too damning to Museveni’s Uganda and Kagame’s Rwanda, the USA’s most effective military proxies in Africa. Consider this section of the “U.N. Mapping Report on Human Rights Abuse in the Democratic Republic of Congo, 1993 – 2003,” regarding a Ugandan-Rwandan-Congolese battalion under the command of Gen. Kames Kabarebe, who has since become the Rwandan defense minister:

“329. On 4 August 1998, hundreds of Rwandan troops and a small number of Ugandan troops placed under the orders of James Kabarebe arrived by plane at the military base in Kitona, in Moanda, having travelled from Goma. Some ex-FAZ soldiers stationed at the Kitona base for several months rallied to join them. During the days that followed, the Rwandan-Ugandan-Congolese military coalition was reinforced by several thousand men and embarked on its conquest of the Bas-Congo via the road between Moanda, Boma and Matadi. Some elements in the FAC, which included numerous children associated with armed groups and forces (“child soldiers”) (known as “Kadogo” in Swahili) tried to resist, particularly in Boma and Mbanza Ngungu, but were swiftly overwhelmed; many died during the fighting.

“330. Throughout their advance on Kinshasa, the Rwandan-Ugandan-Congolese coalition, referred to in the remainder of the report using the acronym ANC/APR/UPDF, killed numerous civilians and committed a large number of rapes and acts of pillaging.” (“U.N. Mapping Report on Human Rights Abuses in the Democratic Republic of Congo, 1993-2003,” pages 164-165.)

And then consider this picture of AFRICOM Commander William “Kip” Ward taken with Kabarebe during AFRICOM exercises in Kigali, Rwanda, in June 2010.

The tears that people, especially women all around the world, shed in response to these horrific rape stories are understandable. Any genuine effort to deliver comfort on the ground is, of course, laudable. But anyone who’s been reading the same “rape blamed on rebel soldiers, eastern Congo still unstable” story and the story of mass killing and millions of war dead in Congo for over 10 years should also be asking why.