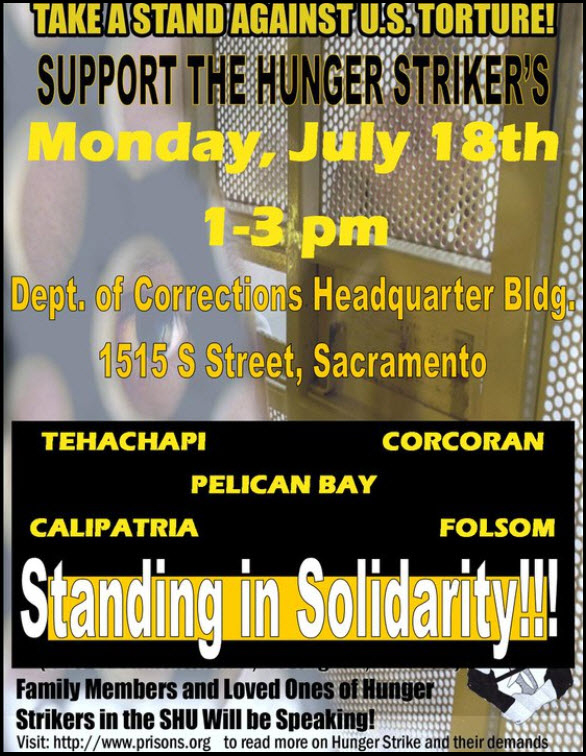 An indefinite hunger strike began on July 1 by the prisoners held in the Pelican Bay Security Housing Unit (SHU). They have been joined by prisoners in the Corcoran and Folsom SHUs and at other prisons. Strong domestic and foreign support has been organized for these prisoners.

For this struggle to be won, however, every available resource must be brought into play. We are at a historical juncture in which prisoners can take control of their lives, to have some say in the conditions in which they are expected to exist, or else they will continue to be mere pawns acted upon by external forces and watch things get even worse.

Starting IMMEDIATELY, prisoners can start the process of improving their conditions of existence by implementing a peaceful work strike in every prison in the state. Defendants may draft demands as each facility sees fit, however, the first demand on the list must be to implement the core demands of the prisons held in the SHUs,.

The longest prison work strike in U.S. history, in Washington State Penitentiary at Walla Walla in 1978, lasted 47 days. It resulted in the release of the Walla Walla Brothers from the isolation unit, the firing of Director of Corrections Harold Bradley, removal of the warden and the transfer of the associate warden of custody to a youth facility. Work strikes can and do result in positive change!

In the recent Georgia strike, prisoners in nearly every prison went on a statewide peaceful work strike. The prisoners were supported by their families and friends, who helped spread the word of the planned strike to other prisons and found supportive groups in a wide variety of communities to bring information about the prisoners’ conditions and bring attention to their demands.

Prisoners in California want to do the same thing.

It is up to YOU to get this message to everyone you trust at your prison and to spread the word across all yards. You are being asked to tell other prisoners that, STARTING IMMEDIATELY, no work will be performed.

NO WORK means no kitchen, no hospital, no anything, NO EXCEPTIONS.

Anyone advocating violence is a provocateur and listening to such people will only result in defeat. The struggle must be solid and protracted. Supporters on the outside will amplify your voice. If you are not the person to get this done, then please give this document to someone you think is.

The work strike is over when the hunger striking prisoners win or are defeated.

If local demands are not met, then the strike may continue at that individual facility.

The first step toward becoming part of prisoner history is to communicate the essence of this document to others on the inside. This message is going into prisons across the state by this and other means.

Send this to everyone in every prison by every means possible.