by Kelly Parker, Special from The Louisiana Weekly 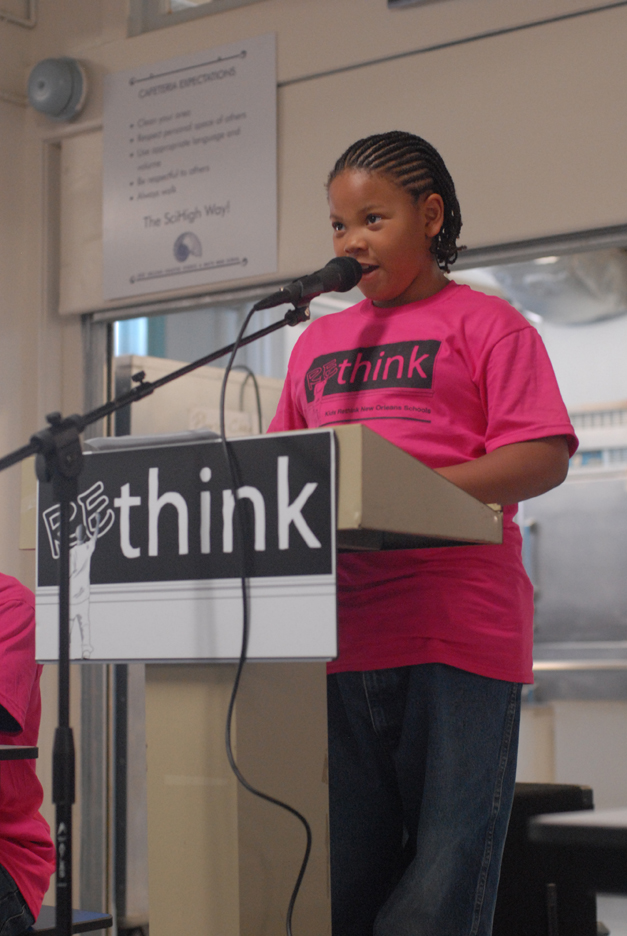 Two of the nation’s most pressing issues involving young people — childhood obesity and violence — are indeed connected. How so? Just ask the Rethinkers.

The correlation between unhealthy food choices and crime and violence was at the focal point of this year’s Rethink press conference. “Candy Bars, Prison Bars — How Schools Can Reverse the Major Youth Epidemics of Our Time” took place last Thursday at the New Orleans Charter Science and Math high school in uptown New Orleans.

“Here in Louisiana, we have the fourth highest obesity rate in the nation; 20 percent of our children in this state are obese,” Rethinker Vernard Carter stated. “The school-to-prison pipeline is when children are pushed out of school because of many policies and pushed into the juvenile justice system.”

Carter added that this year, there are over 4,000 youth under the supervision of the Louisiana Office of Juvenile Justice. “Why? he asked. “What’s wrong here?” 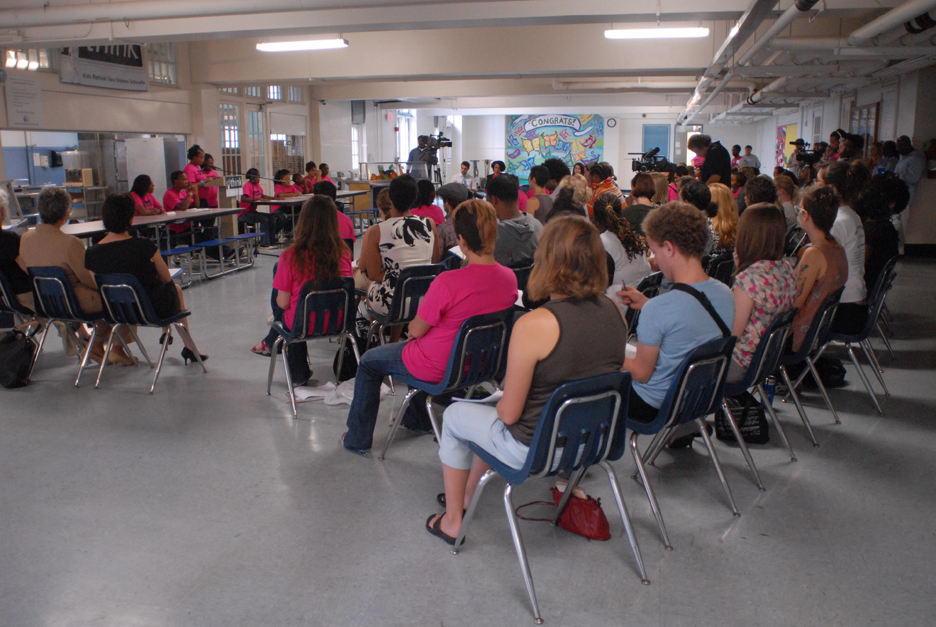 This was the second Rethinkers press conference for White. “This is an extraordinary program and I’m so happy to be back here for the second time in a couple of months to speak with these extraordinary youngsters,” he said.

Rethinkers, that is, school reformers, aged 8 to 18 have set out to cease what they call “the two biggest youth epidemics of our time” — childhood obesity and the school-to-prison pipeline. Last month, the Rethinkers received a grant from the Robert Wood Johnson Foundation and the Funders’ Collaborative on Youth Organizing to conduct a youth-driven campaign to stem childhood obesity in area schools. The July 21 news conference marked the official campaign launch.

“Over the summer, we learned that childhood obesity and the school-to-prison pipeline are connected,” Vernard Carter told those in attendance. He continued:

“First, they both affect a disproportionate amount of low-income Black youth. Second, when students eat unhealthy, sugary foods, have no exercise and have a lot of stress, they tend to act out in school, which often leads to suspension and expulsion, which basically puts them in the juvenile justice system.

“We as young people most affected by these epidemics should be at the forefront of this fight for change.” 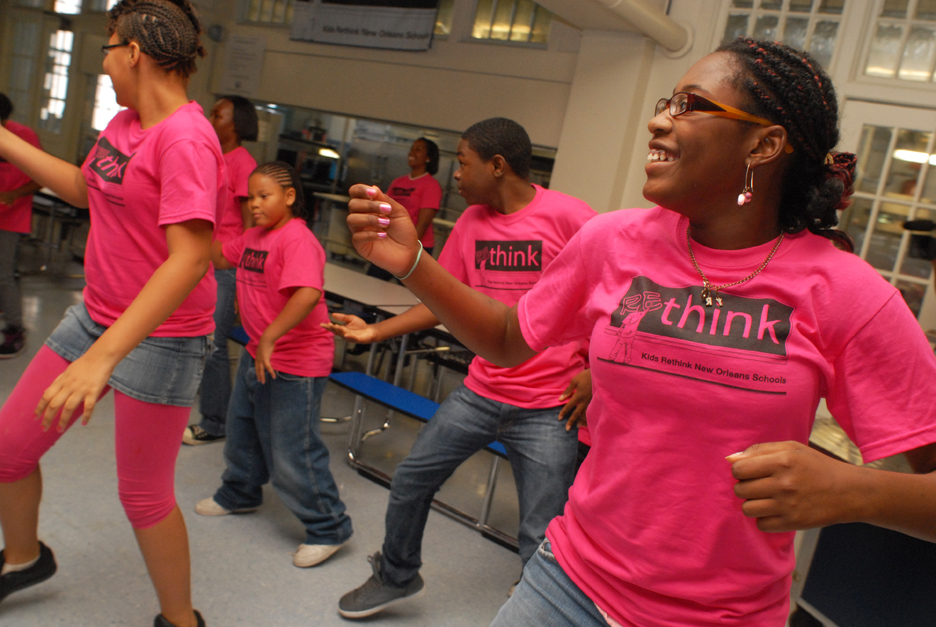 The recommendations detail concrete changes schools can adopt to make kids healthy and keep them out of the criminal justice system, for example, replace snacks like nachos, candy bars and hot dogs with healthier choices at school events; teach cooking and gardening at every school; and keep school gardens open after school so healthy habits carry on after school ends by students as well as other members of the community.

The group also asks that teachers reward students with healthier treats in place of candy bars. “That’s really not helping us to be healthy and fit,” says Rethinker Arieanna McKnight. Another goal of the Rethinkers is to provide healthier options in school vending machines.

This parallel addressed by the group is nothing new. In 2009, research led by Simon Moore, a senior lecturer in violence and society research at Cardiff University in the U.K., showed that “kids with the worst problems tend to be impulsive risk takers and that these kids had terrible diets — breakfast was Coke and a bag of chips,” for example.

“We are thrilled at the kind of thinking and work that the Rethinkers are doing,” City Commissioner of Health Karen DeSalvo said. “You guys are a wonderful voice, not just of youth but, I think, for everybody who cares about us being healthy. I hope we can become a model for other cities.”

The Rethinkers are asking that schools provide all students from grades K-8 with 30 minutes of physical exercise a day — which is a Louisiana state law. They also recommend the inclusion of the innovative Instant Recess Activity, a concept introduced by Dr. Toni Yancey, a UCLA professor, which consists of regular 10-minute exercise breaks that can be incorporated at work, in the community and in the classroom twice a day, giving more exercise options to all students. 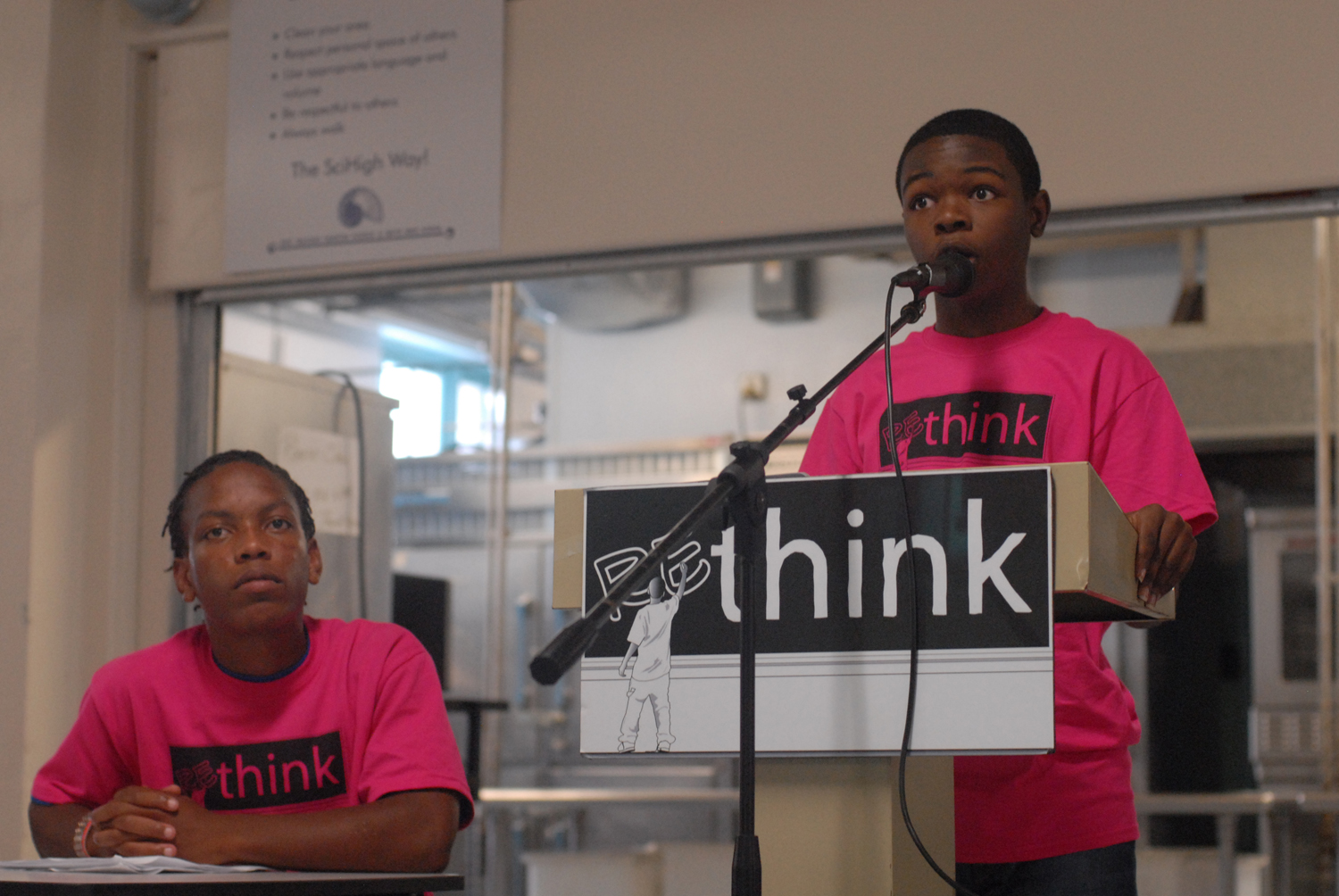 Rethinker Jada Cooper stated that many her of female classmates often opted out of P.E. because the activities were often geared to male students. “A lot of times, they snuck in candy, chips and sunflower seeds,” she added.

Ron Triggs, a fourth-grade “PreThinker,” says: “All students need to exercise, so they can burn off energy and focus in class. If some don’t exercise, they will act out and get in trouble. We have P.E. in my school, but not every week.”

The group highly stressed the need for community-building activities in every homeroom, along with support groups including teachers, counselors and students. To the Rethinkers, the issue of conflict resolution is a key component in this campaign.

“After someone has participated in a restorative justice circle, they are 60 percent less likely to get in trouble again,” says Vernard Carter. “We strongly suggest that restorative justice be placed in all schools in place of suspensions and expulsions.”

RSD Superintendent White invited the Rethinkers to meet with his staff to take the next step in helping change many of the policies the group has addressed.

“I’d like to invite a committee of the Rethinkers to come in and meet with me and experts who have advised us on the issues.”

Kelly Parker is a freelance reporter for The Louisiana Weekly, where this article first appeared.