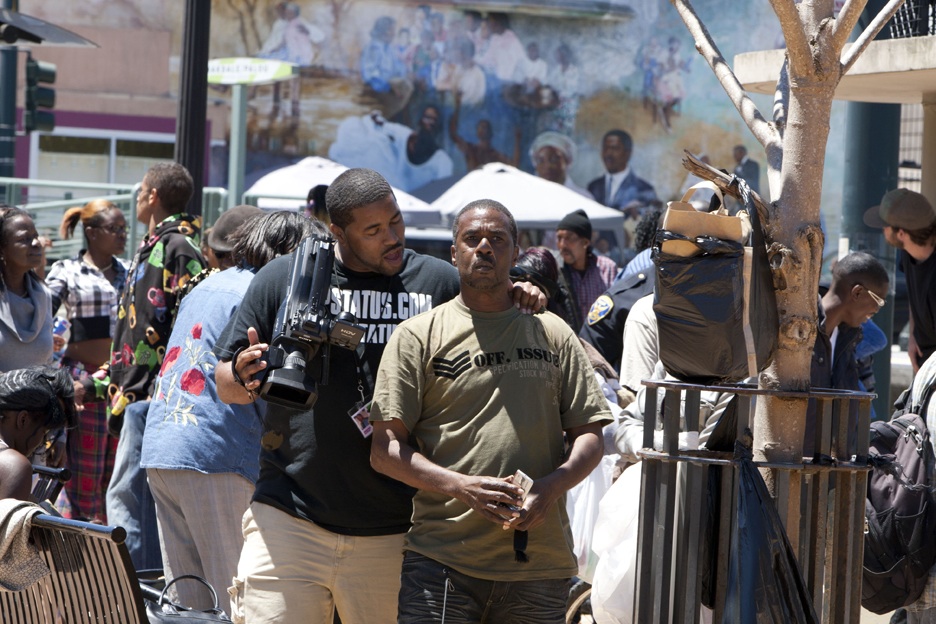 Nineteen-year-old Kenneth Harding Jr. was shot and killed on July 16 as he ran away from two police officers interrogating him for his alleged failure to pay a $2 fare for a ride on the city’s light-rail train.

Incredibly, after originally admitting that two officers shot and killed Harding, the new story from the police some days later is that the young man must have killed himself.

The ever-changing stories by the police are actually all hard to believe and give urgency to community demands that the federal government begin an independent investigation.

Doubts have increased dramatically since the latest claim that Harding’s wounds were self-inflicted. This scenario seems incredible especially after viewing dramatic and graphic camera videos which show a bleeding and dying Harding lying on his stomach, desperately fighting for his life by trying and failing several times to get to his feet while still surrounded by the two officers with their guns drawn down on him.

The latest police version was floated because the medical examiner autopsy revealed the fatal bullet was not of the caliber normally issued to police. [However, according to the SF Bay Guardian, the police proposed this information, not the medical examiner. – ed.]

Therefore, in simple police logic, Harding must have fatally shot himself, either intentionally or not.

Seeming to lend credence to their scenario that Harding had a gun, forensic evidence revealed gunpowder residue on one of his hands.

But there are several problems with this story.

First, skeptical community activists point out that police at the scene could easily have contaminated Harding’s hand, intentionally or not, by somehow transferring gun powder residue from their hands to his hands.

“The forensic and ballistic ‘evidence’ offered up by the police is not of the sort that could not be produced, and barring transparency in the investigation we have to allow for this possibility,” asserted Jeremy Miller, co-director of the community-based organization Education not Incarceration.

“We need an independent investigation by the federal government. The use of deadly force by the San Francisco Police Department – and this is not the first time in the recent past – demands no less. They must not be allowed to investigate themselves. Their findings must be vetted and analyzed independently.”

Secondly, while the police claim Harding had a gun, they have yet to find it.

In my interview with Willie Ratcliff, publisher of the San Francisco Bay View national Black newspaper based in the neighborhood, he had this to say:

“I interviewed numerous witnesses at the scene after I arrived some 20 minutes after the shooting. Nobody ever claimed Harding had a gun until some six hours after the killing when the police got their story together and issued their first statement.”

In fact, several camera videos scanning the broad perimeter of the shooting scene do show dozens of bystanders constantly shouting out to officers: “Where’s the gun? Where’s the gun?” The videos show no response from the police.

They now assert, however, that the gun in question was picked up by a bystander and they have produced a video showing what appears to be a gun lying on the ground some 25 feet in front of Harding’s body. But, just as quickly as it appeared, it disappeared.

In fact, the amateur video displayed by the police is inconclusive and definitely needs more professional review.

In any case, none of the numerous bystanders nor any the police walking around the scene ever saw a gun anywhere. This was confirmed by the San Francisco Examiner: “Eyewitnesses … [told] ABC7 News they didn’t see any shots being fired at the officers.”

“I just seen shots going forward,” resident Henry Taylor told the television crew. “I didn’t see shots coming backwards.” Police allege that Harding shot backwards at officers while running and that somehow he fatally shot himself in the right side of his neck at the same time.

The shooting occurred in broad daylight on a late Saturday afternoon around one of the most popular and crowded street corners in the impoverished Bay View Hunters Point neighborhood.

Charlene Muhammad, national correspondent for the Nation of Islam’s Final Call, is covering the story and told me: “On the videos I reviewed, the bystanders all appeared to be alert and aware. It is very surprising to me that none of them would have seen a gun the police say was only 25 feet away from Mr. Harding’s body.”

The police admitted that the Black community is skeptical and it explains why the department has been aggressively pushing its story all over town. A press conference was held and three press statements were released along with an aborted community meeting where Chief of Police Greg Suhr had to abruptly leave because of intense questioning and some frustration and anger that erupted from the outraged neighborhood audience.

As part of their campaign of “openness,” police have also showcased their new audio “shot spotter” technology mounted in the Bayview since 2008. Its sound technology recorded 10 shots in quick succession lasting a total of six seconds.

Somehow, the police concluded that the 1.9 second time difference between the first and second shot proves that “Harding fired the first shot,” which they claim was then immediately responded to by officers. I assume most lay people like myself will find this self-serving deduction quite unconvincing and, to a certain extent, even ridiculous.

But this part of the story also changes. The San Francisco Examiner reported that Suhr contradicted the high-tech “shot-spotter” single-shot theory and enhanced this first version by stating that Harding did not just fire one shot but was “believed to have fired more than one shot.”

In fact, the SF Weekly reported Suhr accused Harding of “firing indiscriminately. He fired at them, they fired back. That is what officers are going to do. If you fire at the police, they are going to shoot back.”

“The story by the San Francisco Police Department has changed so much over the last week that it just might be what it is: a story,” Jeremy Miller remarked to me.

The truth and nothing but our truth

Another disturbing part of the police investigation is the focus on Harding’s criminal past. It only serves to distract from the facts of the shooting.

Minister Christopher Muhammad from the San Francisco Nation of Islam told The Final Call he is “disturbed by apparent newspaper and police attempts to spin facts of the incident and demonize Mr. Harding by drumming up his past criminal record. But that is a routine tactic used to sway public opinion to justify police actions.”

So, where does the real truth lay? We know that a young Black man was shot dead and we know that those who have the most to gain by blaming the victim are leading the investigation and churning out facts of the case.

The truth is: The very public campaign by the police department to get their story out is every bit as much rivaled by their very private control of the investigation.

For example, District Attorney George Gascon is also investigating – but he is the most recent former San Francisco chief of police. “He is not independent,” Miller told me.

“The fact that DA Gascon just recently left his post as chief of the San Francisco Police Department presents an obvious conflict of interest and makes his claim of independence questionable at best.”

The San Francisco police Homicide Division is investigating as well. Claiming they are independent is dismissed by Miller as “absurd and an insult to the public.”

Finally, the Office of Citizen Complaints (OCC) is investigating. “The OCC has too many ties to the police and prosecutors to present itself as reliably independent,” says Miller, “and its record of sustaining only 3 percent of citizen complaints annually attests to this.”

Finally, Miller comments on the Police Commission – another body potentially involved in the investigation: “The Police Commission as it is currently constituted is a largely political body with four mayoral appointees and three appointed from the Board of Supervisors. With all the holdovers from the Mayor Newsom years, we are faced with a generally conservative body that by and large does not seem particularly inclined towards the discipline of officers despite that being one of their mandated responsibilities.”

I then called the Police Commission and spoke to Public Information Officer Albie Esparza. I asked if he could recall any officer ever being disciplined for misconduct during a fatal shooting. His response was, “I don’t know.”

Undeterred by this answer, I told him that I believed someone in his position should know at least part of the most recent record. I asked the question again to this otherwise polite “public information” officer but he would not budge. Finally, he invited me to send an email directly to the Police Commission.

It’s time a federal investigation is begun. Neither Enron nor News Corporation is alleged to have killed anyone, at least not directly; yet we would be repulsed by relying on their own private internal investigation.

Why should the San Francisco Police Department with an arguably wretched record of police brutality and deadly force in the Black community be given a pass and allowed such a privilege?

Carl Finamore is a writer and labor activist living in the Hunters Point neighborhood of San Francisco. He can be reached at local1781@yahoo.com.