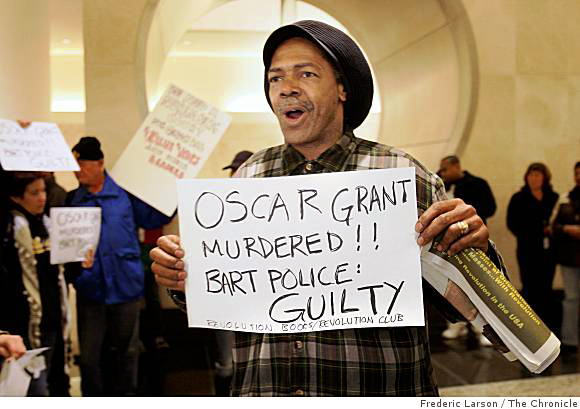 In the aftermath of Oscar Grant’s murder in 2009, directors of the Bay Area Rapid Transit district announced they would turn over the agency’s internal affairs probe to what they called an “independent, third-party law firm.” BART board member Carole Ward Allen explained the decision saying, “It was essential for the public to have complete confidence in the findings of this internal investigation; and the best way to guarantee that confidence was to bring someone in from the outside with an impeccable record to conduct the investigation independently.”

BART leaders quickly selected the Oakland-based law firm, Meyers Nave, to carry out the investigation. At the time, this action failed to prompt a close look at the firm’s background, practice areas and clientele.

An examination into Meyers Nave’s work on the Oscar Grant case and its work for various police departments around the state, reveals a firm that is anything but an independent third party. Meyers Nave is instead a law office deeply intertwined with municipal governments and police forces. Its lawyers strongly identify with government clients who account for all of the firm’s business. 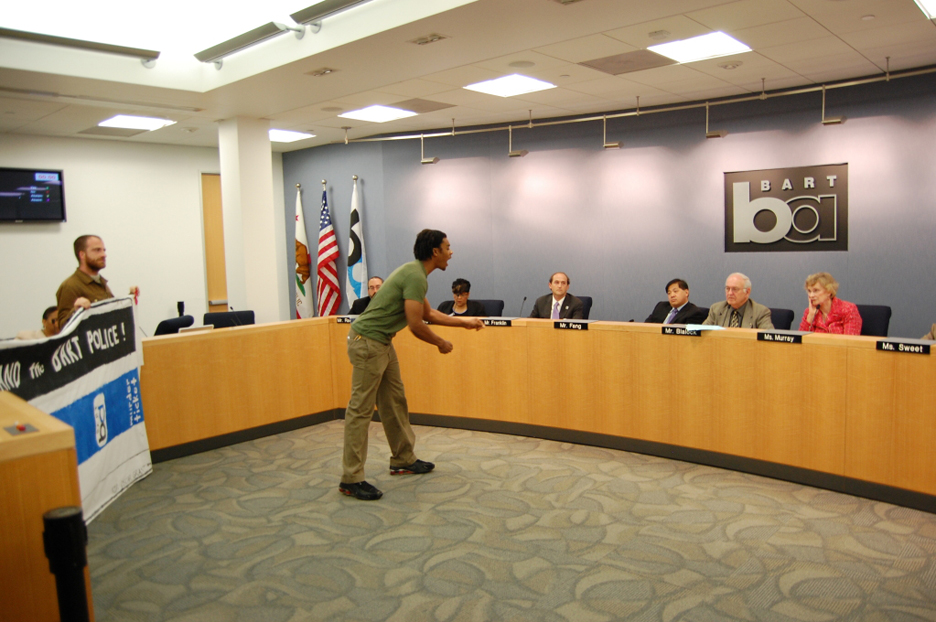 Released in August of 2009, Meyers Nave’s final report on Oscar Grant’s murder, which they called “the New Year’s Day Situation” or “incident,” offered some strong remonstrations of the BART Police Department’s policies and practices, going so far as to describe the rank and file as “seriously deficient” with respect to tactics and training.

BART executives greeted the report as a welcomed reform tool. “I appreciate their efforts,” said BART Board President Thomas Blalock, “which I believe are helping to open a new chapter in our continuing efforts to improve police services at BART.” BART board member Carole Ward Allen greeted the report, calling it “a very valuable tool that will help us to improve BART’s efforts to keep our system safe for all riders while helping to prevent such incidents in the future.”

The report’s purpose, apparent in the operative language used in it and echoed by BART’s executives, was to “improve police services” and “improve BART’s efforts” to make the “system safe.” Somehow these became the goals of the internal affairs report – not investigating allegations of systematic BART police misconduct and abuses of power related to Grant’s slaying.

Even so, critics of the BART police initially welcomed the Meyers Nave report, highlighting some of the findings that generally supported their own research and observations regarding widespread abuses by BART officers against riders, particularly youth of color. In the end, however, Meyers Nave’s “independent” investigation failed to rock the boat, almost as if by design.

A closer look at the Meyers Nave law firm reveals that this was entirely by design.

The next year, Meyers, Nave, Silver and Riback emerged as a private law office ready to represent San Leandro and make a profit in the process. In later years, Meyers Nave would duplicate this strategy and sign contracts with other cities to take over virtually all responsibilities of the traditional city attorney’s office. Today, the firm has contracts with 25 municipalities and dozens more special districts and counties. As a diversified law firm, Meyers Nave handles everything from environmental law to land use to public finance.

In recent years, Meyers Nave has racked up an impressive list of victories defending police departments against lawsuits brought by individuals and family members of those who have alleged abuse and civil rights violations at the hands of officers. Representative examples drawn from Meyers Nave’s own website include:

“Martinez v. City of Fairfield. Plaintiff Martinez, a 13-year-old boy, alleged civil rights violations by Fairfield officers after being struck in the face numerous times during an arrest. The jury returned a complete defense verdict, finding that the officers acted appropriately.

“Creal v. City of Fairfield. The plaintiff brought a federal civil rights excessive force claim against the City of Fairfield and two individual officers. After deliberating for less than four hours, the jury came back with a complete defense verdict on all state and federal counts.” 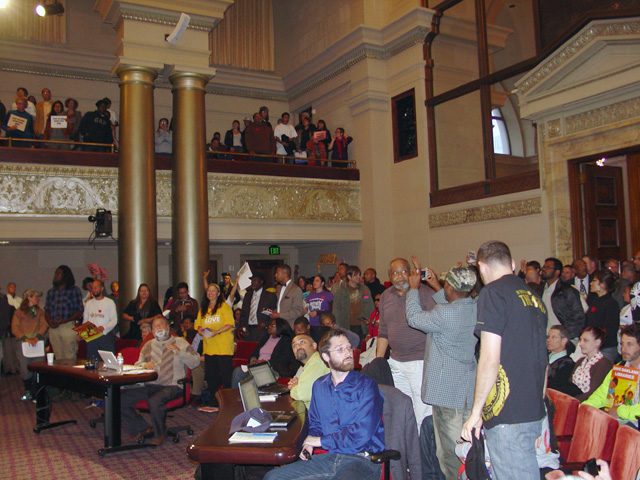 In addition to defending cops accused of violence and misconduct in court, Meyers Nave specializes in what it calls “Crisis Management: Public Policy, Ethics and Investigations.” This practice area merges public relations with law. According to the firm’s website, “It is our goal to help clients preserve, or regain, public trust and avoid lasting damage.”

In advertising materials, Meyers Nave’s attorneys talk about “controlling the crisis” and “creating a legal and public relations action plan” in the aftermath of situations such as police shootings. Today, Meyers Nave advertises its role in the BART internal affairs investigation into Grant’s shooting as a successful example of its approach to “crisis management.”

Going on the offensive: gang injunctions and less-than-lethal force

Meyers Nave is mostly a defense counsel, hired by cities and their police departments to prevent investigations into official misconduct from blowing up and to contain potentially costly judgments in civil rights, environmental and labor cases. But the firm is also involved in crafting policies sought by tough-on-crime politicians and police forces.

Unlike its role in the BART internal affairs investigation, Meyers Nave’s work for the City of Oakland has been subjected to some scrutiny by community members and journalists. In February, before court hearings to consider the Fruitvale injunction, the grassroots coalition Stop the Injunctions asked “whether the private law firm of Meyers Nave should be allowed to sue the defendants on behalf of the people of the state of California?” 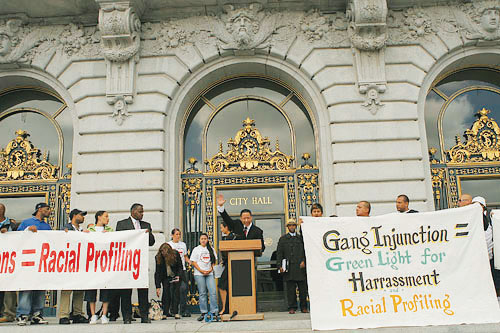 Reporters such as Erik Arnold, who covered the court hearings, took note of the unguarded moments in court when Meyers Nave’s attorneys identified themselves as representing “the police point of view.”

Such spirited work to promote police initiatives like the gang injunctions seem to contradict the notion that Meyers Nave is an “independent” or “outside” entity, capable of objectively conducting investigations of police shootings such as that which ended in Oscar Grant’s death.

She cites studies providing evidence that crime rates have fallen after the imposition of some injunctions in Los Angeles and other cities. Evidence is still sparse and much of the existing research is in disagreement on the effects of injunctions, however.

In an article entitled “Gang Injunctions Make Neighborhoods Safer,” Hynes makes a kind of sales pitch to readers: “The reason why more and more cities are considering gang injunctions is that they work.”

Hynes, who was made a principal attorney at Meyers Nave in 2008, is one of the firm’s lawyers specializing in the defense of police accused of brutality and civil rights violations. Her clients have included the police forces of San Leandro, South San Francisco, Petaluma, Fairfield, Milpitas, Union City and other Bay Area cities.

Beyond the courtroom, she has published papers on subjects like how to “Avoid or Reduce Litigation Costs – Critical Steps Police and Other Departments Can Take” and how police forces can defend themselves in “In-Custody Death Cases involving Tasers,” “Excited Delirium” and “Positional Asphyxia.”

In arguing for the Fruitvale gang injunctions, Hynes was described as forceful and passionate in court. Oakland’s contracts with Meyers Nave were for $40,000 to prepare and litigate each gang injunction targeting Fruitvale and “Area 3” in far East Oakland.

City Attorney Russo has since resigned to take the position of City Manager in Alameda. Alameda has reportedly retained Meyers Nave as counsel in 2011.

Bay Area writer Matthew Jackson can be reached via editor@sfbayview.com.