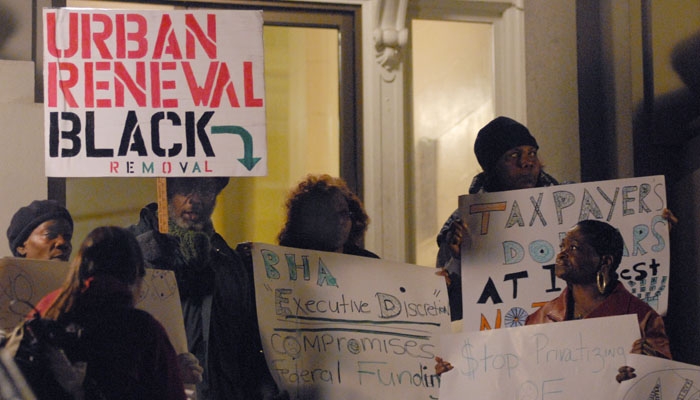 Berkeley – In another step to privatize Berkeley’s 75 occupied public housing town-homes, billionaire Stephen M. Ross, CEO and founder of The Related Companies and 95 percent owner of the Miami Dolphins, is in talks with the Berkeley Housing Authority (BHA) to buy Berkeley’s occupied public housing through one of his companies. As of Sept. 8, 66 of the 75 units are still occupied.

The BHA has entered into an exclusive negotiating rights agreement (ENRA) with billionaire Ross and The Related Companies of California, LLC, after the BHA’s joint finance and feasibility subcommittee recommended his company. BHA Executive Director Tia Ingram wants the ENRA to last a period of 90 days with the possibility of a 30 day extension.

According to Forbes as of March 2011, Stephen M. Ross is worth $3.4 billion, having lost around $1.6 billion in net worth during the past few years because of the crumbling real estate market. Ross resides in luxury at 956 Fifth Ave. in New York City.

If billionaire Ross and The Related Companies get their hands on Berkeley’s public housing units, the city of Berkeley may end up subsidizing them out of the city’s Housing Trust Fund to renovate and rehabilitate the public housing, but the majority of funds needed to renovate the buildings will have to be raised by Related.

Berkeley has long been known as a bastion of liberal causes and the progressive movement, and it is an obscene gesture to many in the community that Berkeley’s public housing units may end up in the hands of a billionaire and his for-profit corporation, and that they may be subsidized with funds from the city’s Housing Trust Fund.

Former Berkeley Rent Board Commissioner Eleanor Walden said, “The BHA has now fallen into lockstep with people like Dick Cheney and Halliburton, if this contract is not transparent or competitive. I am appalled at the record of the BHA during the past few years, which has contributed to the erosion of public housing.”

Established in 1966, the BHA in recent years has been listed by HUD as a “troubled agency.” The BHA, which owns and manages 75 public housing units and administers 1,939 subsidized housing Section 8 voucher contracts, filed papers with HUD on Dec. 29, 2009, to dispose of its public housing. HUD approved the request on Dec. 22, 2010.

On May 2, 2011, the BHA released a request for proposals (RFP) from so-called nonprofit housing developers or for-profit developers willing to buy Berkeley’s 75 three and four bedroom townhouses, located throughout the City of Berkeley on 15 parcels.