“We shall not be overrun!” – NYPD Sgt. Gonzalez

As some of you know, I’ve been around bobbies, cops, fuzz, flics, Gestapo and other police since the British General Strike 1926 and the Battle of Cable Street 1936. The more it changes the more it’s the same. 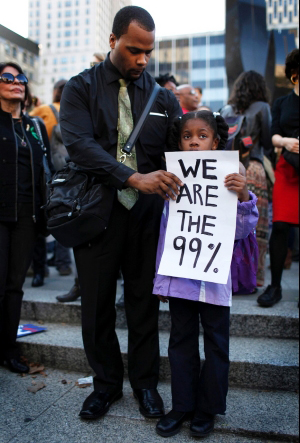 Last Thursday morning, Oct. 13, in the rain at jam-packed Zuccotti Park/Liberty Plaza in the financial district of New York, it was cleanup time by the occupiers. For the cops it was a low-profile day, but I counted 26 officers in uniform – 23 blue- and three white-shirted – scattered around the perimeter in twos and threes plus seven undercover men, presumably FBI/CIA, in suits.

I couldn’t figure how many cops there were in reserve but I counted 19 police cars, vans and wagons and at least 20 motorbikes on Broadway and side streets, not counting unmarked vehicles. I also spotted one fixed black NYPD seeing-eye camera and a mobile NYPD watchtower.

The occupiers were harder to identify at first. Mostly white, more men than women, mostly around 23 years old, a few Blacks, Latinos and Asians and a scattering of union workers. Many seemed college-educated and about 10 percent were hippies in the Woodstock tradition.

I spoke to 15 occupiers at random and was impressed that they shared a common goal: transformational change. Squeezed in the shadow of the looming new World Trade Center and with your back to Wall Street, it is easy to understand why the OWS (Occupy Wall Street) believe the corporate world into which they were born is on its way to the lush green graveyard at Trinity Church around the corner on Broadway.

However, as the police ring of steel reminded us forcefully, the corporate world based in lower Manhattan is not going to quietly play dead. In the words of NYPD Police Sgt. Hector Gonzalez, “We’re more than ready to show these motherfuckers what we are made of!”

About the officers in white shirts? He said they are a new PDU (Police Detail Unit), not NYPD cops as such. But they carry guns and handcuffs with the power of arrest. They’re the ones who took care of the 730 peaceful protestors arrested Sunday, Oct. 2, trying to cross the Brooklyn Bridge.

“They get paid $40 an hour – not by the City but,” Gonzalez said, somewhat resentfully, I thought, as he pointed back to Broadway adding, “from the Stock Exchange and Goldman Sachs.” His partner, Officer Henderson, added a final touch: “Our commissioner (Ray Kelly) wasn’t security boss all those years at Bear Sterns for nothing!” 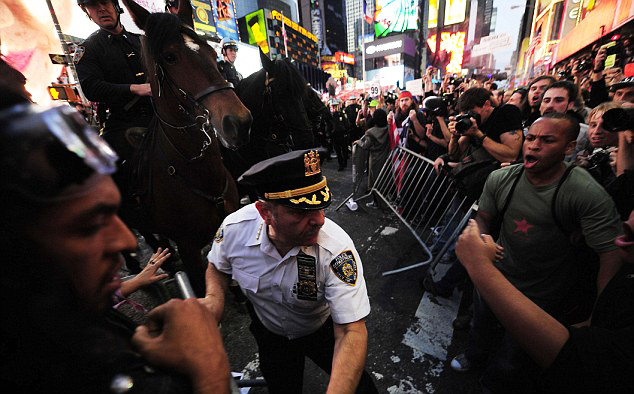 Scouting around the periphery, I encountered an assembly of 15 OWS seated under an awning in front of Trinity Church discussing if their on-going cleanup of the park would forestall Mayor Bloomberg’s order to have the police do it the next day. And, if it didn’t, what kind of non-compliance should OWS take?

It was an open consensus forum skillfully moderated by a young man I took to be one of the OWS “leaders” – a word they deliberately refrain from using. He emphasized the critical need to remain non-violent under whatever provocation the police and their agents might initiate against them to show to the media that they were “dangerous extremist anarchist mobsters.” After taking a few photos of the meeting, I went over to the moderator and told him to watch out for the two men standing in the shadows. CIA or FBI, I thought.

On the plaza underneath the striking red Mark de Suvero triangular “Joie de Vivre” sculpture known locally as the “weird red thing,” another OWS leader moderated the open-non-mike talk-in from the SRO crowd which totaled well over a thousand. Fascinating was the new “language” of repeating every sentence three times – borrowed from the Black church tradition? – and of hand and finger sign gestures – borrowed from the deaf.

The talks were not long, rambling speeches but short, two-minute or less statements mostly from people who articulated the messages: “The 1 percent (Wall Street/corporate capitalism) is destroying the world.” “We are the 99 percent and we will not pay for your crisis!” Clear enough for me and certainly to increasing numbers of listeners in this country and now around the world.

The day after I was there, Mayor Bloomberg backed down. Huge victory for OWS. But, as Sgt. Gonzalez reminded me in a memorable, if unintended reference to MLK, “We shall not be overrun!” So help me.

What you can do is support OWS in YOUR area and sign the pledge of support and solidarity with the Wall Street Occupiers at www.avaaz.org/wallst.

Jon Naar is a photojournalist and author of 14 books on ecology and environment and co-author with Norman Mailer of the iconic ”Faith of Graffiti.” A former member of the left wing of the British Labor Party, he worked with Gandhi in London for Indian independence in 1936 and with the Front Populaire in Paris for the Spanish Socialist Government in 1937. In 1951, he was blacklisted for outing the CIA at Columbia University on the CBS Sunday “People’s Platform” radio program with an audience of 10 million listeners. He worked with Mailer supporting anti-Vietnam War draft resisters and has written articles for “Monthly Review” and other progressive media. He is currently finishing “A Different Kind of War” based on his six years in World War II as a spy for MI-6 in Palestine, Lebanon and Syria and intelligence officer for British Special Operations Executive (SOE) in Egypt, Italy and the Balkans with the rank of major. He considers himself a radical conservative/independent anarchist. He lives in Trenton, N.J., and can be reached at jonnaar@comcast.net. His website is jonnaar.com. Jon Naar Copyright 2011.

On the Move! Support the Move 9 on their 34th year of wrongful imprisonment

Re-asserting the cultural revolution in the National Occupy Movement