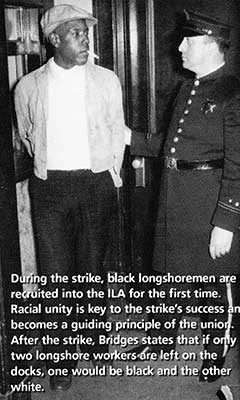 On July 5, 1934, San Francisco port bosses pulled out all stops trying to break a two-month West Coast dock strike. The workers fought back.

Police that day killed Nick Bordoise and Howard Sperry — two of seven workers killed between May 15 and July 20. The capitalist-class assault on the longshore strike angered rank-and-file workers from 100 unions in the Bay Area. They voted to strike in support of the port workers, overruling conservative union leaders.

On July 16, the four-day San Francisco General Strike began as strikers and National Guard battled for control of the shut-down city.

This is commonly described in labor history. What is not so well known or emphasized is the conscious and concerted outreach to the African-American community by longshore strike leader Harry Bridges, which for the first time brought Black workers into the longshore union.

Bridges’ pledge is noted in “An Historical Exhibit by the ILWU,” a traveling art exhibit that commemorates the 1934 strike. A small panel depicting a handcuffed Black worker beside a cop is captioned, “Racial unity is key to the strike’s success and becomes a guiding principle of the union. After the strike, Bridges states that if only two longshore workers are left on the docks, one would be black and the other white.”

Keeping a promise to Black workers

Thomas C. Fleming, co-founder of the San Francisco African-American weekly the Sun-Reporter, wrote about his experiences. “In 1934, one of the low years of the Depression, blacks could only work on two piers in San Francisco — the Panama Pacific and the Luckenbach Line. If you went to any other pier down there, you might get beaten up by the hoodlums. … 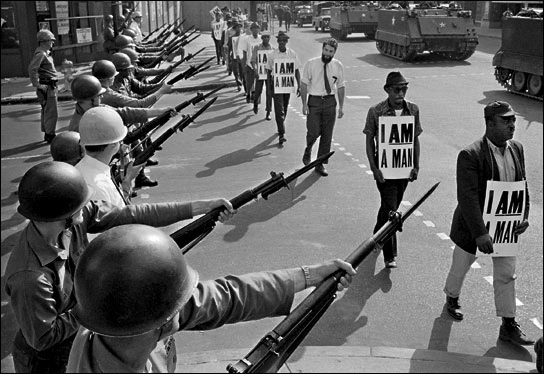 “The system on the docks then was called the shape-up, in which the bosses on all piers selected whom they wished to hire on a daily basis. They held absolute power. No one had a guarantee of a daily job, unless he was a pet of the dock boss, or paid a sum of his daily earning. …

“Before this time, I clung to views that the trade union movement was just formed to continue racial discrimination. But Bridges … felt that by keeping the unions lily-white, there would be a steady reservoir of black potential strikebreakers whenever strikes were called, which would weaken the unions when negotiations broke down.

“Bridges went to black churches on both sides of San Francisco Bay and asked the ministers: could he say a few words during the Sunday services? He begged the congregation to join the strikers on the picket line and promised that when the strike ended, blacks would work on every dock on the West Coast. …

“The waterfront strike ended on July 31 when the International Longshoremen’s Association [now the ILWU] was recognized by the ship owners. Bridges kept his word: All piers were opened to blacks. They began to get the same work as everyone else, and some later became union officers. As part of the agreement, the [union] got its own hiring hall, which it controlled, and the men got a minimum 30-hour week and a raise to $1 an hour” (hartford-hwp.com/archives/45a/146.html).

This year on April 4, the rank and file of Harry Bridges’ ILWU Local 10 honored the labor movement’s call for “no business as usual” in solidarity with Wisconsin public workers. The union’s motto, “An injury to one is an injury to all,” and Bridges’ working-class solidarity and unity pledge echoed through the 77 years. They did not report for work.

No cargo moved at the international ports of Oakland and San Francisco for 24 hours, respecting the Rev. Dr. Martin Luther King Jr., who was assassinated on that date in 1968 while supporting African-American sanitation workers in Memphis, Tenn., who were striking for collective bargaining rights. That strike’s symbol was the deeply expressive “I am a Man” picket signs.

Dr. King was an honorary member of Local 10 and spoke to workers there only six months before he was assassinated in Memphis.