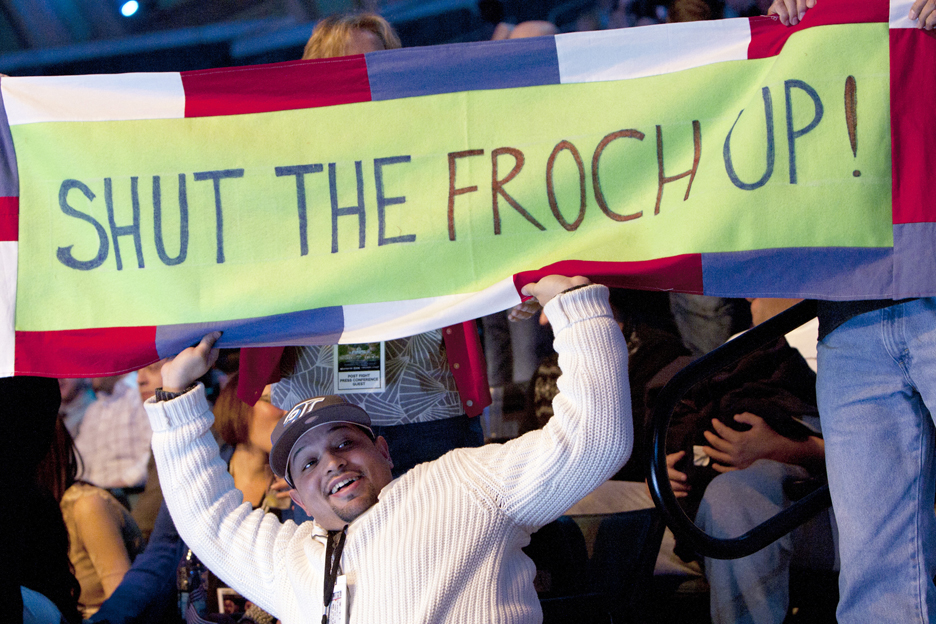 In a masterful display of inside fighting, Andre “Son of God” Ward ended the Super Six Super Middleweight World Boxing Classic by shutting down Carl “The Cobra” Froch physically and mentally, as what sounded like a full house of roaring fans tore down Boardwalk Hall in Atlantic City, New Jersey, with competing chants of “USA,” “UK,” and the especially memorable billboard sized exhortation to “Shut the Froch Up!” from Andre’s family and friends.

Well, shut Froch up and shut him down Ward certainly did. Froch’s braggadocio about walking through Ward’s punches with laughter and glee came to naught. 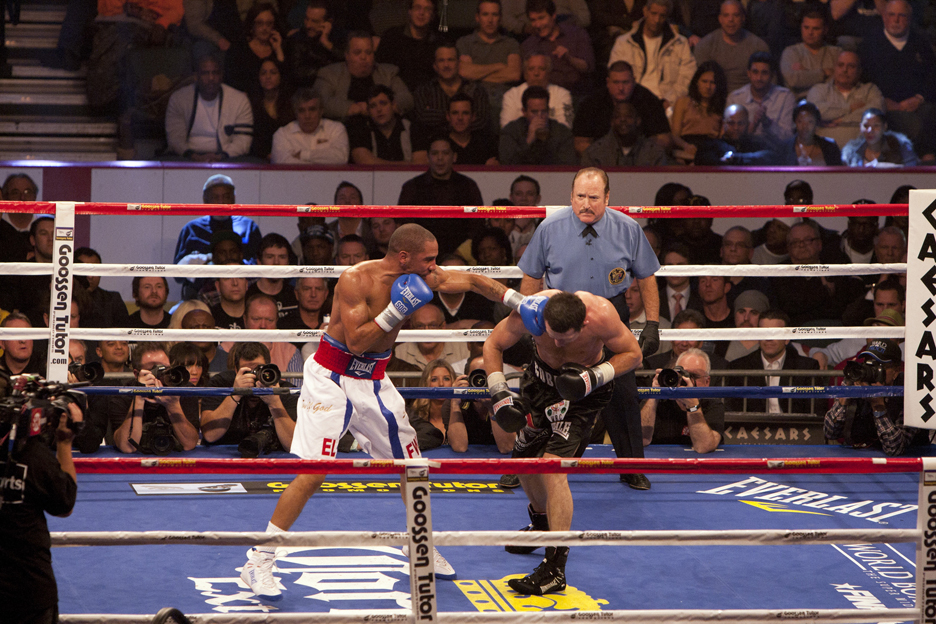 Using a tactical combination of close inside fighting, defensive slips, solid check punches and stop blocks, Ward took the fight to Froch and did not allow Froch any room to control the fight.

Mixing his movements in a style uniquely his own but reminiscent of boxing greats Muhammad Ali and Mike Tyson, Ward had a very slow Froch disassembling under the pressure – off balance, swinging wildly and tiring early – while Ward dominated with a unanimously scored win: 118-110 from judge John Keane (U.K.) and double 115-113 scores from judges Craig Metcalfe (Canada) and John Stewart (U.S.). 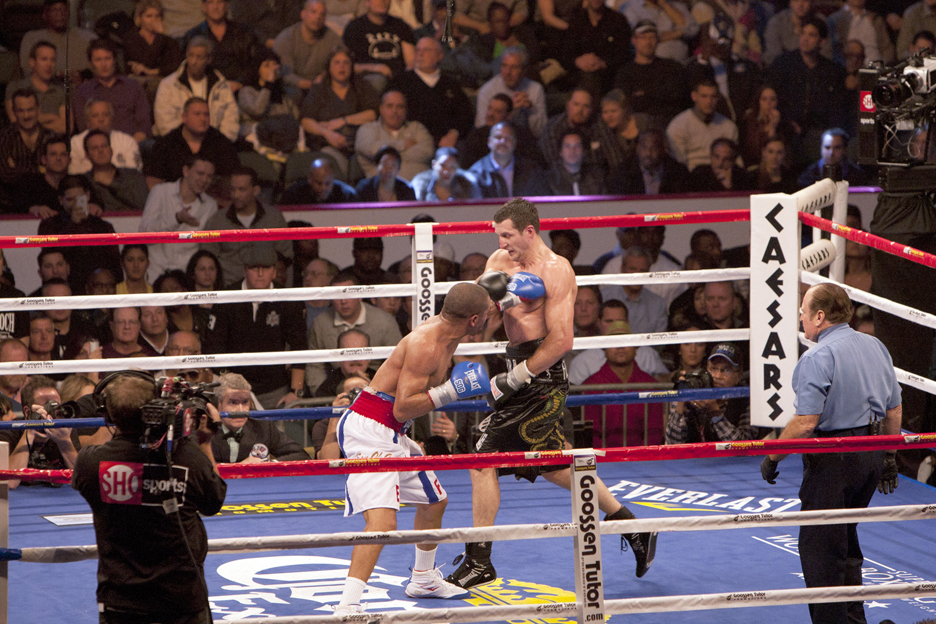 In fact, many did wonder how Metcalfe and Stewart could score the fight as closely as they did, given that Ward stayed in Froch’s chest throughout the entire fight, causing (from this reporter’s perspective) a frustrated Carl Froch to hit Andre Ward after the bell in the 8th round.

But thankfully, New Jersey referee Steve Smoger let the fighters box close in and work out of clinches on their own, unlike referees in previous Super Six bouts.

It doesn’t take a doctorate to recognize that Andre Ward is fast becoming one of the greatest inside fighters of this era and, pound for pound, one of the best boxers. And he’s bringing something to the artistry of the sweet science that hasn’t been seen recently: a thinking mind and a refusal to go all blood, guts, gore and glory to satisfy a ravening crowd that is steeped in too much Rocky-esque Holly-weird unreality. 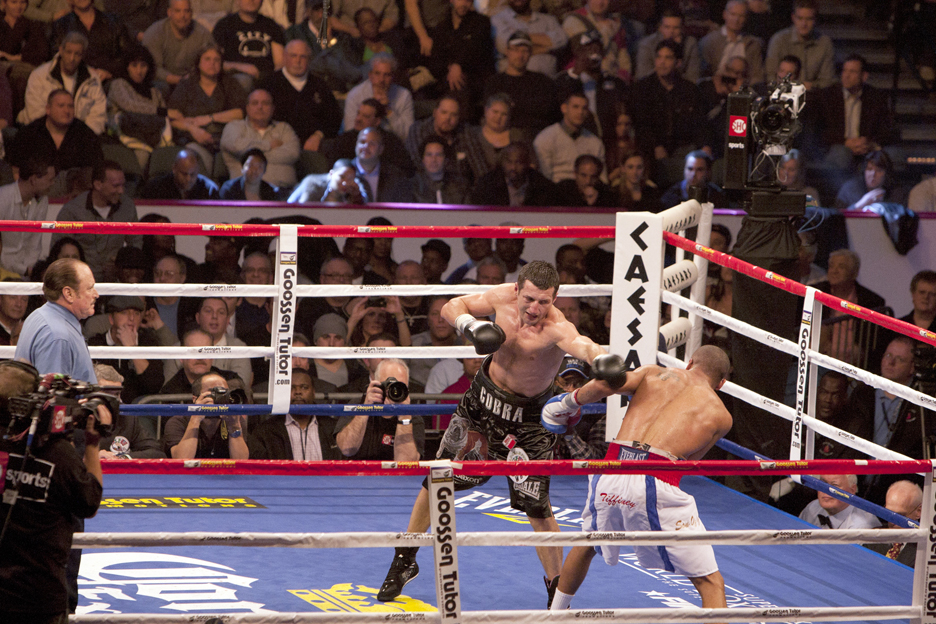 He’s nearly singlehandedly returning the wisdom of the masters to the game, while on the road to becoming a master in his own right.

The man needs to be given his props for this, particularly being as young as he is, and the fact that he owns the impressive, mind bending record of being undefeated for all of his amateur career save one fight, and all of his professional career, bar none – for a stunning 15-year run.

He’s redefining the art, right under the noses of the naysayers and the critics, and they apparently haven’t the sense to wake up and smell the coffee and the tea.

It is sad when collective stupidity rears its ugly head, but they will learn. Those of us who already know will be observing what happens next with great interest.

And yet, attracting belts to his trophy case like the gravitational pull of a small sun hasn’t weakened Ward’s mindset. He could easily sit back and rest on his laurels, but he doesn’t. He doesn’t walk about as if he is invincible, nor does he take his eye off the ball. He does the work that it takes to win; he loves, respects and treasures his family, remains true to his spiritual beliefs – while quietly becoming one of the more vicious competitors in boxing – the man to beat if opponents can get past a lightening fast left hook, being dissected on the inside, and being out-thought and out-maneuvered in the ring by whatever battle plan the situation demands.

Ward’s steady rise upward appears to be as much the product of his team truly functioning as a team – Goossen Tutor Promotions, Antonio Carver Productions, Manager James Prince and the steady hand of his coach, Virgil Hunter – as it is the continued development of his own innate talent.

And again, the building of such a solid foundation and base of support has not been seen in boxing in recent memory.

This reporter, who has been watching boxing and reading about boxing legends since before Cassius Clay became The Greatest, can see the planted seeds of a new era emerging and recognize that no one has yet seen all that this young boxer will offer to the art.

And while it matters that Andre “Son of God” Ward is now the undisputed WBA and WBC Super Middleweight champion of the world, unifying the 168-pound division in a manner not seen in its entire 27-year history; and it matters that Ward is Ring Magazine’s 2011 Boxer of the Year; and it matters that he has earned the coveted Super Six World Boxing Classic cup and, it is rumored, is soon to be nominated the best pound for pound boxer of the year; there is one more thing of which the world needs to be aware.

What truly matters more is what is being built, brick by brick, like a breath of fresh air, bringing a truly competitive spirit into the sweet science that is born of respect for the art as well as for the individual athlete, his or her boxing team and the truly great masters from before.

This will be a priceless legacy for the youth – men and women – who enter the sport and are fast coming up behind Andre Ward.

Frank Ward and the world are watching and can be very proud.

Malaika H. Kambon is a freelance photojournalist, candidate for the University of California at Berkeley’s Graduate School of Journalism and the 2011 winner of the Bay Area Black Journalists Association Luci S. Williams Houston Scholarship in Photojournalism. She also won the AAU state and national championship in Tae Kwon Do from 2007-2010. Injured in 2011, she plans to resume training in January 2012. She can be reached at kambonrb@pacbell.net.