Berkeley – With tens of thousands of protesters from the Occupy movement hitting the streets in Oakland, San Francisco, New York, Los Angeles and cities all across the nation demonstrating against the brutal on-going budget cuts and social inequality leaving families in the cold and hungry, massive budget cuts continue to devastate public housing and the nation’s social programs. 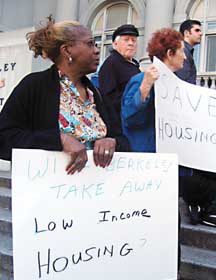 As the blood of protesters has been flowing onto the streets of Oakland, students pepper sprayed at UC Davis and attacked by brutal police at UC Berkeley, our nation’s public housing program is currently being underfunded by 22 percent less than the president’s request for FY 2012.

Nationally, with our 1.2 million public housing units already in need of over $25 billion in repairs, on Nov. 17, Congress passed legislation to cut the housing budget by $3.7 billion that was signed into law by President Obama a day later. Additionally, $1.2 trillion more in budget cuts are set to occur that are connected to a deal made with the so-called Super Committee of Republicans and Democrats that will further devastate housing programs starting in 2013.

Tens of thousands of our public housing units may be lost as a result, and while thousands of families in public housing are placed at risk of living in substandard conditions or made homeless, the Berkeley Housing Authority (BHA) has recently entered into an exclusive negotiating rights contract to sell Berkeley’s 75 occupied public housing units to billionaire Stephen M. Ross, owner of The Related Companies of California and the Miami Dolphins.

When asked if she thought it was a good idea for a billionaire to get his hands on Berkeley’s public housing units, Mary Lightfoot said no.

Public housing resident Anna Smith said, “All I know is that the rumors are going around that the building I reside in is being sold to a billionaire that owns a football team. I heard that I would learn more details from the BHA sometime in March.

“I have lived here in public housing since 1992, and I was told that this was my home to raise a family in. Now I am being told that I will have to move. I have grandchildren living with me that are teenagers in school, and I do not know where I am going to go.

There is no place left to go for poor people once all of our public housing is gone.

When asked what is planned next if the negotiations fail, BHA Project Manager Kathleen Sims said, “The BHA is in negotiation with The Related Companies of California, and until those negotiations are over I cannot say more about the next step the BHA will pursue with its public housing units.”

According to the Center on Budget Policy and Priorities, the Section 8 voucher program has a shortfall in funding of $130 million that may result in a loss of 12,000 to 24,000 vouchers. Additionally, among other programs facing budget cuts, the Home Program was cut by $600,000, and housing for the elderly was cut by 51 percent more than the president requested.

As the federal and state budget cuts continue to decimate communities all across the nation, Republicans and Democrats in Congress continue to allow the rich and the super-rich to avoid paying their fair share of taxes.

These budget cuts will kill our children