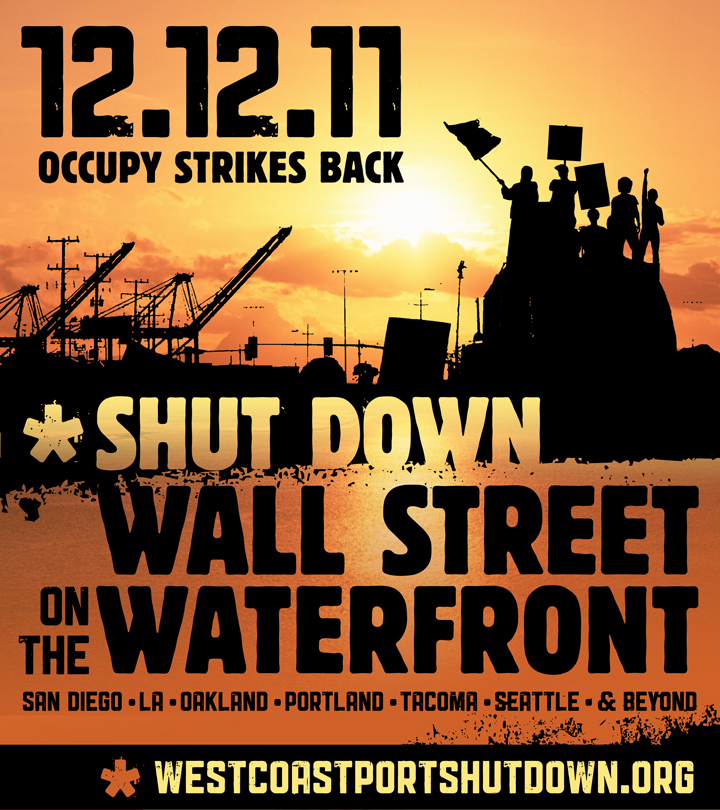 Battle lines have formed as the West Coast Occupy movements, from San Diego to Alaska, flex their collective muscle against the federally coordinated, brutal attacks against the pro-Occupy Wall Street movements across the country. They are organizing for blockades of West Coast ports on Monday, Dec. 12, in San Diego; Los Angeles/Long Beach; Port Hueneme, Calif. (central coast); Oakland; Portland, Ore.; Seattle; Tacoma, Wash.; and possibly more. Solidarity actions have been called by OWS in New York and inland locations, as well.

The pro-OWS movement is aligning itself with labor and the working class, as the West Coast Occupy movements organize to support the struggle of the International Longshore and Warehouse Union in Longview, Wash. Longshore workers there are waging a ferocious battle against transnational EGT, controlled by Bunge Ltd., of the grain cartel that controls most of the world’s trade in food products. EGT hired scabs to try to break the ILWU in an attempt to drive down wages and destroy the union. (Read “Longshore workers call for anti-racist unity in their ranks.”)

The West Coast Occupy movements are also aligning with the struggle of port truckers, who are fighting for the right to organize for union representation. Twenty-six of them were fired in Los Angeles for wearing Teamster jackets to work. Occupy LA and Long Beach are targeting SSA, an anti-union port terminal operator, majority owned by Goldman Sachs, the notorious Wall Street investment bank. Teamster president Jimmy Hoffa Jr. has publicly expressed support for the Occupy movement.

Michael Novick of Anti-Racist Action, one of the main organizers at Occupy LA working on the port shutdown action in Los Angeles, told WW that the ports around Los Angeles County stretch 20 miles. So, the strategy will be to shut down three main targets. Novick states, “When we put the resolution through at the General Assembly in support of the port shutdown, it was tied to building a general strike on May 1st of 2012 and building relations to the immigrant rights movement.”

Finally, the West Coast Occupy movements are targeting the ports as major commercial centers, showing that they can strike at the institutions which help to aggregate the wealth of the 1 percent by disrupting Wall Street on the waterfront. It’s the history of the militant ILWU which enables this attack to have teeth. The ILWU rank and file have historically supported political struggles such as the anti-apartheid movement, the anti-war movement, in defense of Palestine in the face of attacks on Gaza, in support of the Wisconsin struggle against union busting etc.

The 1 percent, under the banner of the Port of Oakland, launched the first volley of their assault on Dec. 4, with full-page ads in the San Francisco Chronicle and Oakland Tribune against the planned Occupy port blockade. They know all too well how powerful this movement has become, evidenced by the historic general strike call and blockade of the Port of Oakland on Nov. 2, when the Occupy movement, with the support of the ILWU rank and file and port truckers, shut down the entire port.

The battle is just beginning. EGT is planning to bring a huge grain ship to the Port of Longview sometime in December or early January to unload the grain piled up there with the use of scab labor. That isn’t going to happen without a major fight. Plans are in the works for phase two of this struggle. Caravans will be heading up to Longview to support the ILWU’s fight to keep their jobs and maintain their union. Port truckers in Oakland have also had teach-ins to help their ranks understand what this struggle means to them. The battle is on!