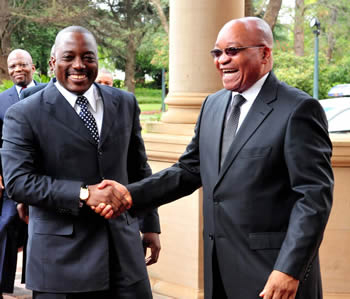 South Africa is home to African political refugees and migrants seeking work from all over the African continent and, as in Europe and North America, immigrants are targets of xenophobia, harassment, intimidation, immigrant police sweeps and even geopolitically motivated attacks. On Friday, Dec. 20, members of the Democratic Republic of the Congo’s immigrant community in Johannesburg contacted KPFA Radio to say that South Africa’s African National Congress government had instructed their police to arrest Congolese immigrants in Yeoville and other Johannesburg suburbs.

On Sunday, Jan. 22, South Africa’s Amandla! Alternative Media Collective put out a release calling on activists to appear at a Johannesburg magistrate’s court the next morning to support 200 Congolese immigrants who were, they said, “hounded out of their shops and homes by scores of South African police, then summarily arrested on ludicrous, trumped up charges of ‘public violence.’”

Amandla! Media also said that many of those arrested are activists opposed to the Kabila regime in their home country. They had gathered in front of the ruling African National Congress Party’s headquarters in December to protest South African President Jacob Zuma’s collaboration with Congolese President Joseph Kabila in stealing the Democratic Republic of the Congo’s presidential and parliamentary elections at the end of November. International observers, including the EU and the Carter Center, and Congo’s Catholic Church, agreed that the election was not only chaotic but also massively fraudulent.

Two hundred Congolese immigrants, especially activists opposed to the Kabila regime, were, they said, “hounded out of their shops and homes by scores of South African police, then summarily arrested on ludicrous, trumped up charges of ‘public violence.’”

After the mass arrests on Thursday, the South Africa Police Service publicly stated that their operation had been an illegal immigrant sweep, but they later said, instead, that they had arrested Congolese factions supporting Kabila and his leading challenger, Étienne Tshisikedi, for fighting with one another in Johannesburg streets. Amandla! Media said that both explanations were preposterous. 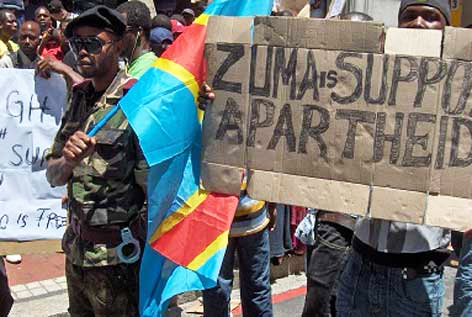 Jean-Pierre Lukamba, chair of the African Diaspora Forum, Amnesty International activist and Congolese refugee in South Africa, has been in hiding since Thursday, but available to press by phone. He said that there are roughly half a million Congolese refugees in the country and that the majority are political refugees who fled for their lives. He also said that although Thursday’s arrests were far more than an immigrant sweep, the ANC government is indeed guilty of mistreating immigrants, most of all those from other parts of Africa.

“The background of that arrest,” he said, “is that there is an organization here in South Africa called Congolese Democracy and Justice Campaign. They are campaigning for democracy and justice in Congo and last time they went to Capetown, they were doing a march. They went to the head office of the ANC to protest because there is evidence that President Jacob Zuma is supporting Joseph Kabila to stay in power by frauding the election.”

Kimbi Mayimona of the Forum of Congolese Organizations in South Africa said that no Kabila supporters had been arrested and that a leader of a pro-Kabila organization had been at the police station identifying those to be held and those to be released.

Shortly before the Democratic Republic of Congo’s November election, Jacob Zuma announced his support for Kabila and their agreement on a deal to transmit hydroelectricity to South Africa from the expansion of Congo’s Grand Inga Dam. The power had previously been promised to Australian mining corporation BHP Billiton to power an aluminum smelter in Congo’s Bas Congo Province.

News24-Cape Town reported on Nov. 12 that Zuma publicly promised Kabila “logistical and security support to help the DRC during its forthcoming elections” at the signing of the deal to transmit hydroelectric power from Congo to South Africa.

1) Two of 22 Congolese immigrants still in custody have been released.

2) Twenty will remain in custody until a bail hearing on Jan. 31, 2012. This will give the arresting officers time to check with the Department of Homeland Affairs to see if their papers are in order.

3) Congolese began to share this video of Zuma at COP17, the climate change conference, in December lecturing that Congolese must not blame other people for their problems and protest in South Africa. In the same speech, he bragged of South Africa’s involvement in the First and Second Congo Wars and its critical role in “saving democracy” in Congolese elections, including the November election declared hugely fraudulent by even the most conservative establishment observers.