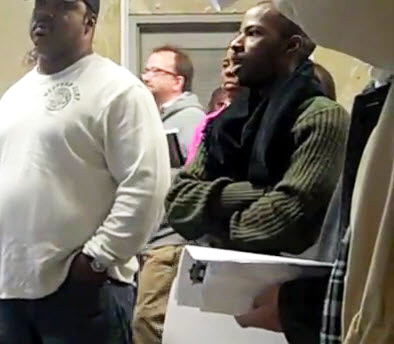 “This auction is illegal and immoral. It is a way to steal homes, redistribute wealth and prevent the right to return. The sale of blighted property is the city’s attempt to remove poor homeowners who have already suffered tremendously from economic and natural disaster. Blight has become an excuse to gentrify. Charging poor homeowners outrageous fees in order to steal their homes is an underhanded way to keep people displaced. Stop capitalizing off of crisis! This process is corrupt! You are stealing homes! STOP NOW!”

We took a stand against stealing people’s property in the name of recovery. We also took a stand to save a space we care enough about to rebuild with our own hands. This is a space that was active before I arrived in New Orleans, but I am determined to work with my family of comrades to get it back in fighting shape.

Survivors Village isn’t just community space; it is a home base for those who understand the radical transformation necessary for us all to achieve liberation. And in this realization and the impending detriment that a loss of this space could be to realizing our vision and bringing it into the everyday reality bit by bit, we knew we had to stand up and shout, “Stop!”

Sometimes a battle is dropped at your front door and demands that you are the one(s) to make change happen, you are called as the one(s) to start, finish or progress this fight. Well, that is what happened when we were told that the City of New Orleans was trying to sell New Day Survivors Village through a sheriff’s sale. Not only was a piece of our livelihood being threatened, but we were also alerted to the injustice that is being illegally perpetrated against homeowners.

Survivors Village was not served notice that it was one of the properties to be auctioned at a forthcoming sheriff’s sale until less than a month before it was to be held. A $575 blight fine that had ballooned to over $9,000 after daily penalties were tacked on was what put the sale into motion – the amount of the daily penalties being greater than half of the initial fine, per day.

Months before the decision to put the property up for auction, the initial blight cited had been remedied and improvements on the rest of the property were constantly being planned and carried out. We had not been notified that there was an ever increasing fee being lobbed against the property, nor were we aware that they decided to sell it.

Does the city really believe this is the best way to deal with blight? It appears to be an easy way to remove property from the hands of those who are poor and limited in their resources and ability to finish the necessary work on their homes. And with the lack of due process in getting a judge’s order – a law has been implemented making this obsolete – or hiring a non-affiliated curator to receive court documents on behalf of the defendant, who never receives them, the city is making it apparent that they are not concerned with reconnecting homeowners and displaced New Orleanians with their homes.

Instead they are satisfied being a huge obstacle for poor and displaced homeowners while placing advantage in the hands of the privileged, who can buy, renovate and make a profit on these homes, further gentrifying New Orleans in the process. 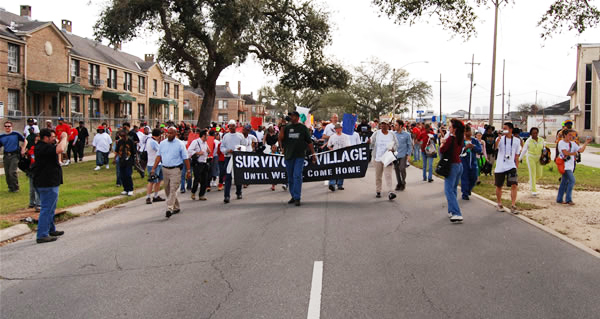 As this picture became clearer, we knew that the issue wasn’t just Survivors Village; it was this whole corrupt process. In a serendipitous fashion, Occupy Wall Street declared Dec. 6 a day of action against foreclosures. And since the city decided it was a creditor that was going to perform code lien seizures and then auction off these foreclosed homes after subsequent nonpayment of unfair fines, the sheriff’s sale was a perfect platform from which to decry the way this lopsided process favors the city. Many of the volunteers working to restore Survivors Village had been in some way or at some time engaged with the Occupy NOLA encampment, so reaching out to link our actions was the natural next step.

There was immediacy in the planning due to the impending sale, so we congregated together with a crew of dedicated activists that were willing to sit through long meetings and democratically come up with a strategy to stop this sale. It can be difficult to achieve consensus and a unified vision for how things should be done. We didn’t always agree on what we were hoping to realistically achieve, how confrontational we should be with the bidders or the wording of our message, but in the end consensus was reached, which is necessary reinforcement to further our fight for the reclamation of true democracy and must be practiced as a pinnacle radical value.

As a group we thought that our action to disrupt and possibly prevent the sheriff’s stolen property sale could be disbanded quickly and we would be threatened with arrest, so we prioritized the language that needed to be delivered first. We had decided that this was not the most strategic time to take arrests, so we would get in there, say our piece while holding up the sale for as long as possible and then either be off or stay in a silent protest with signage, depending on the level of police suppression: a guerilla strategy for the initial incitement.

Every time the auctioneer spoke through his microphone to begin the auction, our mic check illuminating and vilifying the process leading up to and including the auction would begin. The auctioneer would try to speak over us, but “the people united will never be defeated.” We mic checked, sang and chanted intermittently and rotating, deciding that if he wasn’t trying to proceed then we could save our voices and just be present in protest.

We also distributed flyers educating the crowd about the realities of the auction. The flyers declared: “This is an auction of stolen properties. When a property in New Orleans is declared ‘blighted’ it is because homeowners are unable to complete the necessary work on their properties to comply with the city’s codes. The city gives the homeowner a fine of $575 and orders the homeowner to finish renovation or demolition of the property within 30 days and pay the fine or face additional fees of up to $500 per day. When poor homeowners are charged thousands of dollars each week – money they would put into their homes if they had it – the city leaves them no choice but to go bankrupt or hand over their properties. This is state sanctioned theft under the guise of ‘recovery.’”

After an hour and a half of this back and forth, start and stop, the police finally gave us a warning. We overestimated how long we would be tolerated and perhaps they overestimated how long we were willing to stay, which was longer than many of the potential bidders did. We gave two collective speeches after the first warning and then remained silent throughout the rest of the auction.

The auction did go on after two hours’ delay, but we felt successful. Our will was felt and our home base was spared, it being virtually unsalable due to taxes placed on it, which are not even applicable to the New Day nonprofit which owns Survivors Village – sometimes not doing paperwork on time is a benefit.

Another success was in connecting with people who are directly affected by this practice and these sales. A man at the auction asked for our help in stopping his house from being sold, so his property was included in the mic check: “Do not bid on property…” was the demand. And even though his house opened at a low price, it too was not bid on.

He was basically in the same position we were in, and the city refused to waive the extra outrageous daily fees and have him just pay the $575 even though he had complied with blight removal. It’s these people who don’t have the resources that we have, limited as they are, to fight the city who are the most vulnerable and need to be represented; it’s for these people that we stand up and shout, “STOP NOW!” It is for them and with all of those struggling with housing injustice that we will continue to fight until it is acknowledged and purported that housing is a human right.

To learn more, go to http://communitiesrising.wordpress.com/, the website for Survivors Village, where this story first appeared.